An unaffordable place to live 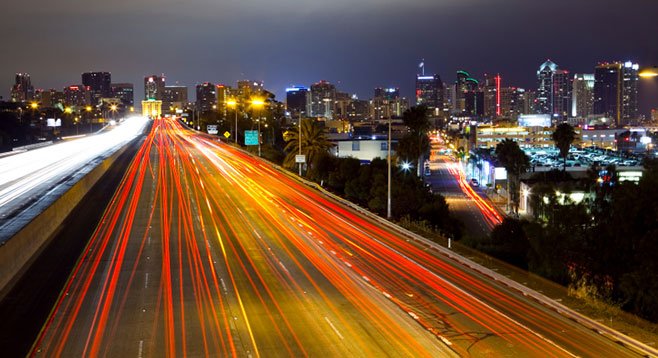 Ever wonder why there’s a lack of fannies in the seats at those occasionally blacked-out Charger games? Or why attendance and donations plunged at the now-defunct San Diego Opera? 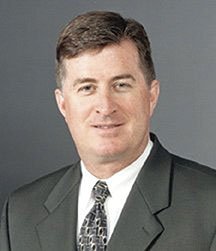 Kelly Cunningham: "Governments tack on so many costs to build a home."

You won’t go wrong putting part of the blame on San Diego’s sunshine. San Diegans get psychic income. The county’s cost of living (groceries, housing, utilities, transportation, health care, and miscellaneous) is 29.2 percent higher than the nation’s, according to the cost-of-living index published quarterly by a research organization that goes by the acronym ACCRA. But San Diegans’ median household income is only 12.3 percent above the nation’s. Result: very high living costs, moderate incomes…a huge gap between money in and money out for most households. 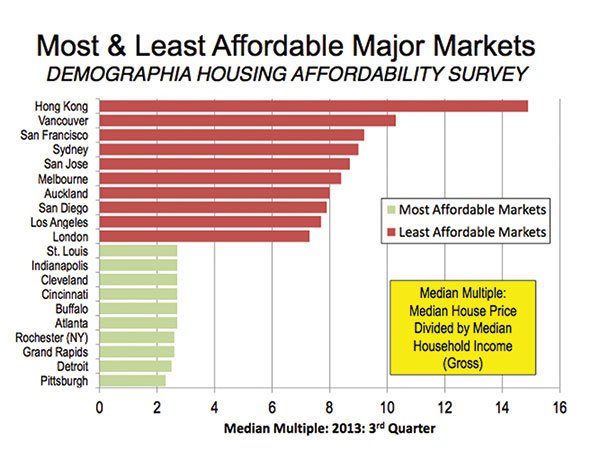 This means lower savings and less disposable income for San Diegans. “People buy stuff on credit. Other spending has to be reduced,” says Kelly Cunningham, economist for the National University System Institute for Policy Research. Cunningham did a special study on the cost of sunshine for the Reader.

The Chargers, true to their name, charge too much for a city suffering from the sunshine cost. According to Team Marketing Report, tickets for a family of four, plus parking, beer, soft drinks, and the like, cost $479.21, tenth highest in a league of 32 teams. Similarly, San Diego Opera may have pushed ticket prices too high. Because of the sunshine cost, San Diegans “spend less on entertainment. Other studies have shown that,” says Cunningham. Another reason is the many outdoor activities that don’t cost much money. 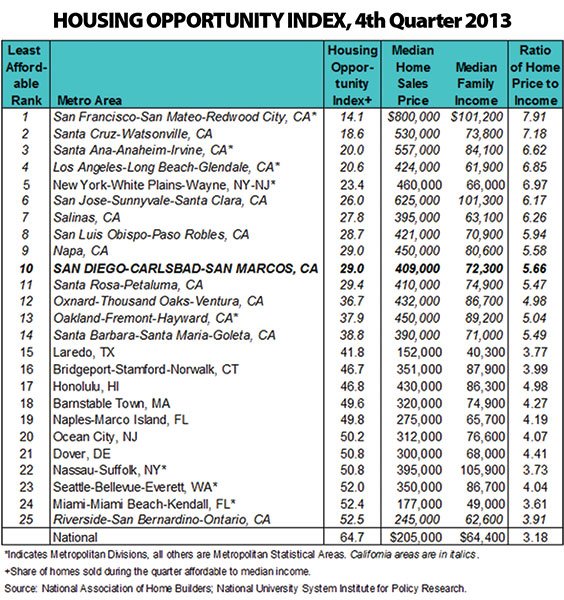 All those metro areas are considered “severely unaffordable” by Demographia. By contrast, the most affordable markets are all in the United States: St. Louis, Indianapolis, Cleveland, Cincinnati, Buffalo, Atlanta, Rochester (N.Y.), Grand Rapids, Detroit, and Pittsburgh.

The housing opportunity index calculated by the National Association of Home Builders and Wells Fargo reveals that of the 14 least affordable metro areas in the United States, 13 are in California. (The study includes smaller metro areas than are in the Demographia study.) In San Francisco, a mere 14.1 percent of families earning the median income can afford the median-priced home. In Santa Cruz, it’s 18.6 percent. San Diego is in tenth place; only 29 percent of families with median incomes can afford the median-priced home.

But in case no one has told you, it is frigid up there. Minnesotans reap a cold-weather bonus, the reverse of San Diegans bearing a sunshine cost. Possibly corporations “have to pay people to live there,” jokes Cunningham.

But do you want to live in Detroit or Youngstown? “People are paying for lifestyle in California,” says Cunningham. One reason California housing prices are so high is that governments tack on so many costs to build a home, he says. However, people still buy those homes, he concedes.

According to ACCRA data, in many major metro areas the median household income is higher than the national average but the cost of living is lower. Theoretically, a family could come out ahead just living there. Those metro areas: Austin, Raleigh, Charlotte, Richmond, San Jose, Cincinnati, Pittsburgh, Atlanta, St. Louis, Dallas, Cleveland, Houston, Denver, Seattle, and Washington, D.C.

In recent years, more San Diegans have been leaving than arriving each year. These cost-of-living and housing-price statistics partly explain that.

I'm surprised San Jose made a list of cities with lower cost of living than average. Housing prices there are even more expensive than San Diego.

Don, one of the biggest problems with discussions like this is that they really don't get into truly meaningful considerations about quality of life, such as Maslow's hierarchy of needs.

We must find a better way than to simply compare our existence to gross statistics.

"Another reason is the many outdoor activities that don’t cost much money" is a good starting point, especially for choosing to live in San Diego rather than anyplace else in the world.

Anon92107: True. The column is really about statistics and not quality of life. And quality of life is one reason San Diegans will pay so much to live in the county. Even the Padres and the Chargers suffer from competition with low-cost outdoor activities. Best, Don Bauder

Don, how much do you think the average San Diegan spends on heating/airconditioning compared to the average Detroit-ian or Phoenix-ian?

Wabbitsd: San Diego Gas & Electric has consistently had the highest utility rates in the nation, but in measuring San Diego's cost of living, utilities costs are a bit under the national average. That's because of San Diego's weather. Best, Don Bauder

"Psychic income" Don you're a poet...or did you steal that one liner and take credit? People live here so they can go to Mission Beach, throw down a towel's worth of personal sea and sand space, find peace, soak up sun, with thousands of other people. A perfect day that is.

shirleyberan: Don't credit me with "psychic income." It was in use when I arrived in San Diego in 1973. When our sons were quite young, we spent many Sundays on the Coronado beach, and the experience was as you describe. Best, Don Bauder

After the housing "bubble" it looks like rich developers are buying what's left here.

shirleyberan: There is no question that institutional speculators have pushed the housing prices up again. Best, Don Bauder

Donny - you know I was joking about that taking credit thing, surely.

shirleyberan: I didn't think you would be nominating me as poet laureate. Best, Don Bauder

Don - Interesting. Gotta think quite a bit about what I would nominate you for.

shirleyberan: Please not for mayor of San Diego. I am not eligible. Best, Don Bauder

viewer: You mean I should run against a mayor of San Diego? That would require too much negative campaigning. Best, Don Bauder

shirleyberan: I accept your nomination. But I don't think critics of my opinions are necessarily wrong. They make very good points. Best, Don Bauder

I left in 1989. Working as a mechanic on high-end automobiles near the coast, I could not earn enough to get ahead, or ever hope to purchase a property within reasonable commuting distance having space for my own vehicle collection. Now I own forest acreage without a mortgage, near a small Northern California town where people are mostly friendly and we all know who the bad guys are. I still come back to visit often, and am glad to leave that disaster you call normal traffic. I still pay about the same as you guys do for everything except for lower property taxes and higher restaurant prices. "Quality of life" isn't all about money. It is about being happy where you live.

By the by Don - Nobody in their right mind wants to be mayor of the messes.

shirleyberan: Strange how politicians race to move into the next highest mare's nest. Best, Don Bauder

Time to break up the banter and return to the topic. It has been a mystery just why, in a city that has low pay, people bid up the price of houses. Oh yes, the homes are priced as they are because people pay them. During the 60's, the pace of home building was so rapid that it kept ahead of demand. (Was it Santee, when in 1969 the developers completed 10,000 homes and 45,000 people moved in? Buyers of new homes often had a number of young kids.) We got the leapfrog developments of badly planned Mira Mesa, and even-farther-out Rancho Penasquitos in that time, plus much of Chula Vista and "beautiful" Otay Mesa. That building boom ended just about the time that the boomers got interested in home ownership, and home prices started their climb. While there were peaks in the market around 1979 (when mortgage rates got prohibitively high), again in 1989 (a bubble), and of course around 2007/8. But the houses are still "unaffordable". How can that be, and how can that persist? The only factor that comes to mind for me is outside money, people wanting to be in the area who have income sources beyond their wages or salaries.

Symbolic Motors? No, but I have made and shipped reproduction parts for some of their cars. My point was, that the "cost of living" is about the same everywhere, except for property values which follow the rules of supply and demand. Some places outside of the cities want to pay employees less, citing the "lower cost of living", but if you rent that is false. No matter where you go in the West, you still pay about the same for food, fuel, power, and entertainment.

CaptainObvious: You see some significant differences in some costs, but you are right that the huge variation is in housing prices. California housing prices absolutely run away from the pack. Some people say no one will come to California because of the high taxes. But housing prices continue to zoom. Go figure. Best, Don Bauder

viewer: You comment did not get removed. Best, Don Bauder

I thought I would never leave San Diego. I grew to love this city. The last place I lived in was Ocean Beach, which became my sanctuary from reality. But life became too expensive to justify a 1 bedroom apartment with no AC and no washer, dryer, and dishwasher, which are all pretty standard in Las Vegas. Unfortunately, I'll probably never go back.

You all are forgetting the key factor, you just can't get cheap three rolled tacos with gauc outside of SoCal. That's why we stay.

elvishasleftsandiego: Like you, many of my friends have left, but unlike you they were (LGBT) homeowners. They joined the San Francisco expatriates investing in Palm Springs for retirement. But unlike the former 'friscans, they didn't need to thaw out. Snopes.com While they abandoned the housing ship before it sank in San Diego, they found quicksand in the desert. They also couldn't afford the addictions medicinally compensating for the heat that their northern compatriots could.

My partner and I bought our home during the Great San Diego Recession of the early '90s. Unlike my friends, we are allergic to debt. Our home will be mortgage-free-and-clear next year. We may be the last middle class persons left in this city.

Bauder, do you still live here?