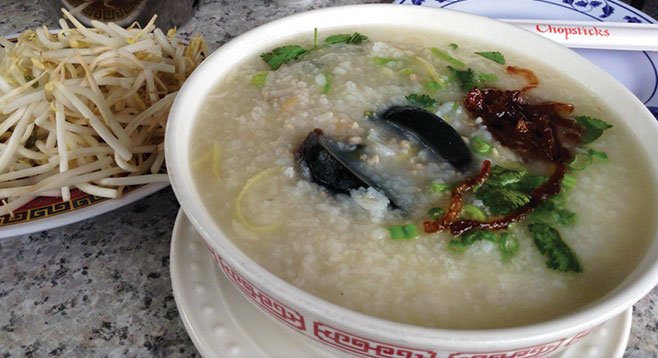 It’s a squeeze, but it’s worth it.

If you come in through the glass front door off of El Cajon Boulevard, you have to make your way between a bunch of water pumps sluicing the wet stuff around the big fish tank for all those live fish you can order. 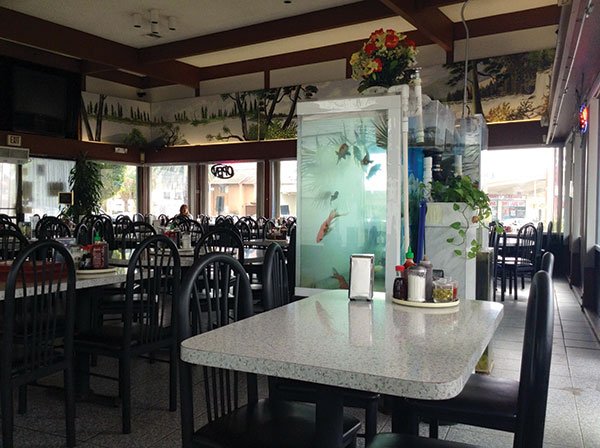 “Oh, sir,” says this rake-thin waiter who spots me kinda sneaking in. “That’s not really for people.” I can see now: most folks drive into the parking lot and come in through the back door. Ah, well. C’est la guerre.

His nametag says Trung. He hurries away to get cutlery. It’s a huge ’60s-moderne-style place with brown timbers and sentimental countryside scenes in murals above the picture windows. Canadian lakes to the west, and tropical Vietnamese beaches to the east. They must have more than two dozen tables here. But this is late lunchtime. Not very full.

I sit down, and a kind of Saigon 1975 atmosphere starts sinking in. One or two Vietnam War vets, I’m guessing, lounge around waiting for pho-to-go orders, listening to the music. It’s all from the era. “Rhythm of the Rain,” “My One and Only You,” “Five Hundred Miles,” “Leaving on a Jet Plane.” 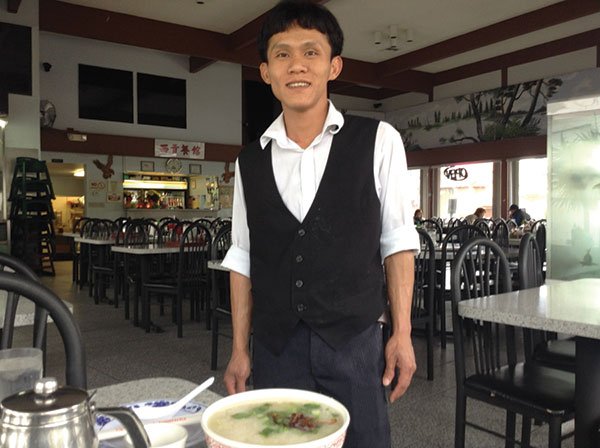 Another waiter, Cuong, brings the water and the menu. A moby-big menu, with the name embossed in gold lettering on the red outside cover.

Where to begin? Don’t want to fall back on eating spring rolls and slurping pho. Determined to tackle something more adventurous. I find my answer at #123, in the “Cháo” section. Vietnamese porridge. Cháo Trung Bac Thao. Thousand Years Egg Porridge with Ground Pork. Costs $6.50.

“Maybe,” says Cuong, “but more with old men and pregnant women. It makes them strong.”

Still, what the heck. It could give me the energy I need for work this afternoon. Plus, I love these Asian porridges made from rice and veggies and hot sauces.

So I order it and ten minutes later Trung walks gingerly up the aisle between tables, balancing the steaming dish on his tray.

It’s a nice big bowl of rice porridge with green onions, sautéed onions, cilantro, ginger, maybe galangal, and when you stir things up, what look like purple-black cut-up segments of eggplant floating up.

Huh. An egg that looks like an eggplant. Coincidence? Whatever, the greeny purple black on the egg’s outside combines with a kind of amber inside skin, greeny-white interior, and pretty inky green-black actual yoke. Not exactly an “Eat me!” sign.

But then I remember the side items they supply. Everything from Sriracha to soy sauce to red chile sauce and green hot peppers liquid. And sugar. I wave Cuong over.

“Which should I put in the porridge?”

“Just some black pepper and nuoc mam,” he says. And he brings around a small bottle of brown transparent liquid. “Vietnamese fish sauce.”

Uh, fermented fish sauce. Strong. Not the greatest smell till you combine it with other things. So I shake that in, then black pepper. Then I also put in some green hot pepper liquid, Sriracha, and the red hot sauce for luck. Plus a few slices of green bell pepper, and a stack of bean sprouts.

It turns out that 1000-year-old eggs have been a specialty of the Vietnamese, Chinese, and others for the longest time, partly because it was a way of preserving duck eggs, and partly because those preserved eggs come out higher in protein and lower in carbs than they were when they went in fresh.

Seems it all started about 600 years ago when a gent in China’s Hunan province found some duck eggs out in his garden where some lime had been left after building his house. The eggs were preserved, not rotten. The traditional method involves wrapping the eggs in clay, woodash, quicklime, and salt. And a whole lot of boiling tea water. And a bunch of mud and rice husk to keep the air out and each one from sticking to the other.

The slices of my egg float up like evil submarines all over the porridge. I grab one and take a chomp. Okay, ammonia. Something like that floats up my nostrils. But then it’s like mushrooms, plus maybe Bleu cheese with its blue mold.

And along with the cool of the bean sprouts and the heat of the chile sauces, it’s a pretty interesting combo.

Interesting enough for me to finish the whole thing, helped down by lots of the tea you get with your meal for $1.

In the end, of course, talk goes back to Vietnam, and changes since the war. Victor the cashier says he was back in Saigon a couple of years ago. “I went to find my old street where I grew up. There was so much development I never did find it,” he says.

One other problem: after all that soup, all that porridge and pork, I can’t risk squeezing through the front door.