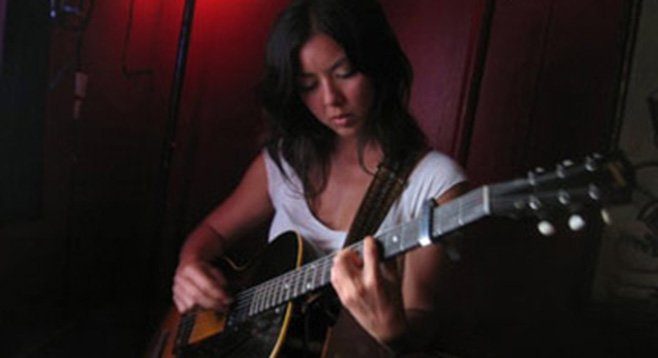 On Thursday, September 26, at Tin Can Ale House, singer Joanie Mendenhall will launch Vanishing Point, featuring five new songs and two reconstituted cuts, recorded live in the studio with her longtime drummer Tyler Ward, as well as Brian Holwerda and Jesse Bowen from Blackout Party. “I wasn’t too keen on the idea of recording live as a band,” she says. “But I allowed myself to be talked into it, and it was such a cool process, definitely right for these songs and this lineup of people. We even ended up keeping most of the live vocals...something I never thought I would do.” Other guest players include Killers violinist Ray Suen and, man of a thousand bands, Al Howard on circuit-bent radio and percussion.

Experimental noise rockers Ogd_S(11) Translation Has Failed have two new releases this week; Three Lifetimes in the Span of a Passing Train (Ambient Works Volume 1), featuring two lengthy tracks, and Leftstump, a seven-song archive of 1994 recordings made in San Marcos.

The October 11 release party at Tin Can Ale House for Emily Drew’s EP Finer Things will mark the concert debut of her new band. “Every single instrument on my EP, other than my acoustic guitar, was played by the same person: Alexander Dausch,” she says. “He’s worked with the Lovebirds and his current band is Tiger Milk Imports. His style of playing and production tends to be more progressive than mine, and I think it gave the EP a really unique feel while still staying in the realm of modern pop music.”

Therapist-turned-singer/songwriter Christine Parker’s debut full-length, Looking Glass, drops October 12 at Lestat’s. “It will be the first opportunity people will have to hear my songs performed with a full band,” she says of her backing group, which will include drummer Bob Sale, bassist Rick Nash, and guitarist Marc Intravaia. “I’ll also share with people my rendition of TLC’s song ‘No Scrubs,’ one of their Grammy-winning hits. I learned it after a friend dared me to play it. Since I’m not an R&B singer, I thought it would be a fun challenge.”

Also due in October, the 11th edition of the local band compilation Staring at the Sun, curated by Reader contributor Bart Mendoza and radio personality Tim Pyles, will feature Social Club, We Are Sirens, Sierra West, Patric Petrie, the Phantoms, Jet West, Neon Cough, Garbo, Johnny Vernazza, So Long Davey, Gayle Skidmore, and Neighbors to the North, as well as a classic track by Hyde, Intravaia, and Boyd, “Can’t Go Back to Cardiff” (from a 1977 KGB Homegrown album).

Also, Latex Grenade has a record release show on October 12 at the Griffin in Linda Vista, on a bill that also includes By Design.

Hanging From the Rafters will debut a new Box of Songs at the Boar Cross'n in Carlsbad on October 12.

Tim Pyles will host the release party for the eleventh edition of the local band compilation Staring at the Sun, curated by Bart Mendoza, at the Casbah on October 22.