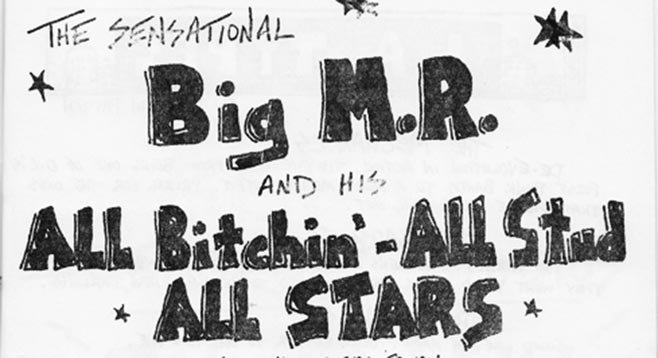 Iggy Pop and David Bowie’s 1977 “Idiot Tour” made a stop at the San Diego Civic Theater on April 16, 1977, supported by opening act Blondie. The band consisted of Iggy Pop (vocals), David Bowie (keyboards and backing vocals), Ricky Gardiner (guitar), Tony Sales (bass) and Hunt Sales (drums). In the audience was none other than San Diego’s Gary Heffern, who cites this concert as the critical moment in his life when he decided to start a band.

“I was in the audience, in the second row, and Iggy came out and gave the microphone to the guy next to me, Tom Griswold,” Gary remembers. “Tom wouldn’t sing, so I grabbed it and started singing and wouldn’t give Iggy the microphone back!” The song was ? and the Mysterians’ “96 Tears.” Young Heffern was an obsessive music fan and had written numerous lyrics but had yet to form his first band. “I was looking directly at Bowie, who was singing back-up vocals,” says Gary. “I knew then that I had to sing.”

Not only would Iggy Pop remain a strong influence upon Heffern, he would also figure several more times in Heffern’s career. A year later at Montezuma Hall, Gary was handed the microphone again, this time to sing on Them’s “Gloria.” The Penetrators would open for Iggy Pop twice.

Post Title: Sensational: The All Bitchin’ All Stud All Stars and the roots of Country Dick Montana

The rest of the world would come to know him as Country Dick Montana, but long before he led the Beat Farmers to international stardom, Dan McLain began developing an onstage persona that would serve as his trademark until his premature passing in 1995 at age 40.

In the late spring of 1980, McLain, who had recently left the Crawdaddys to drum full time for the Penetrators, was restless for yet another outlet for his irrepressible personality. For some time, he had been concocting a plan to form a band for a single gig that would consist only of members of current “working” bands in the local punk scene. The band would have a horn section and another drummer so McLain could sing lead. And he wanted to call it “The Sensational Big M.R. and his All Bitchin’, All Stud, All Stars.”

Gary Heffern, Penetrators lead singer and All Stars choir member, recalls a particularly strong influence upon McLain. “Dan was a huge Dean Martin fan, and so he wanted to try his hand at showbiz, in a group with horns.”

Crawdaddy guitarist Joe Piper also reminds us that “[McLain] was the first person I knew who really understood he was an entertainer and that, say what you will, when you get up onstage, you’re in show biz. He knew that he had to reinvent himself into something...popular enough to pay the bills.”

McLain sent word to his friends in local bands.... Rehearsals were held at McLain and Heffern’s infamous punk rock house in Chollas View, near 54th and Redwood Streets, and were well-lubricated, to say the least. Jim Call remembers that the band members took the All Stud moniker quite seriously. “It was understood that the drinking should be manly. As such, there were no wine coolers, or Mai Tais, or flavored anything. Whiskey and beer were de rigueur.”

The band made its debut performance on Saturday, June 7, 1980, at the Zebra Club. The packed club jeered, shouted, and sang along. Heffern remembers, “Dan told all the girls to start screaming — so they did! I think everyone either liked it or was confused by it, but it was a definitely a defining moment of the making of Country Dick.”