“Plenty of food, help yourself!” 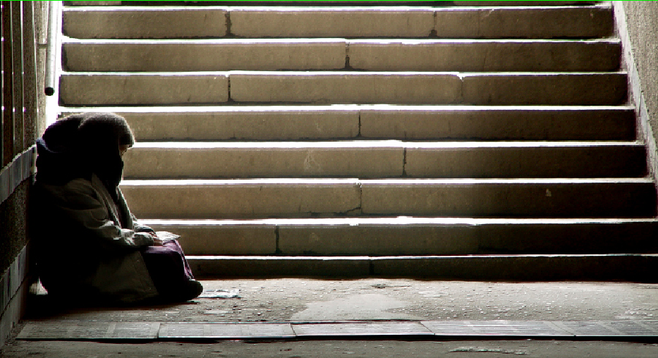 I was working in Mira Mesa as an “internet specialist” at the time, calling over 200 real estate agents a day, trying to sell them advertising. I didn't have a lot of money one day, and I was hungry.

I took the bus from Mira Mesa back to P.B., where I was let off by the Wienerschnitzel on Garnet. I walked past the Rubio’s, past a car dealership, to the sign that reads “Mission Bay Park.” Home.

I would walk along the bay and see tourists at the Mission Bay Marriott, dining outside and enjoying themselves. That day, while I was walking past the hotel’s pool area, I saw that there was an event going on…like, a wedding rehearsal.

At first I said to myself, Wow they are having a great time! Music was playing and there was a buffet by the gated entrance. It had been a “casual Friday” at work, so I was dressed in a T-shirt and shorts. I thought about the nice change of clothes that my new fiancée, “the “Dar,” had laundered. I had the clothes and other belongings stashed in a big bush by the water.

I walked to the end of the park, where there's a huge playground area. I went to my bush and got a nice pair of black shoes, a white laundered shirt, a pair of pressed black pants, and my Jerry Garcia tie. I dressed in the bathroom, which was only about 50 feet away from the gazebo where I would lay down my blue sleeping bag and rest my head every night.

It took me awhile to get from the bathroom to the party at the Marriott. I was a little nervous, but I was dressed like I belonged there and gave a big smile to the woman talking to her friend by the gate. She said to me very happily, "This is such a beautiful day and such a nice place!"

While I was talking to her, out of the corner of my eye, I could see the gate was locked. She was an older woman with a Southern accent, very pleasant. I asked her how far she had traveled. She was from Louisiana. I mentioned to her that I visited there on my 49th birthday and had a great time and said that LSU is a terrific football team.

We had a good rapport going, and she opened the gate and I walked in while still talking to her about football. Then she said, "By the way there is plenty of food, help yourself!”

They had pasta, Swedish meatballs, salad, sandwiches and ice-cold beer and soft drinks in a big white tub. So I grabbed a plate , silverware, and napkins, and just before I was ready to gorge on some great "free" food, I got a tap on my shoulder. My heart sank and I thought, Shit, I'm dead!

It was a well-dressed dude from the party who said, “Man, where did you get that cool tie?” I put down my plate, turned over my tie, and said, “This is a Jerry Garcia tie, and my mom got it for me a few years ago just before she passed away.”

The man said, “I’m sorry to hear that. but that is a great tie!”

I then put a lot of food on my plate, grabbed a cold beer, and walked away from the crowd. There was a DJ later that night, dancing, more food and drinks, and I stayed until about midnight. Most of the people there were from Louisiana — very friendly and down to earth.

I managed to make myself a plate of food to go, wrapped it in foil, and hid it by a small bush close to the gate. When the party ended, i walked back to my living space by the gazebo, trudged through the sand, got my stuff from the big bush and went to sleep with a big smile and a full belly.

Michael Watts I've been there and done that! Your stories hit home to a lot of people. It is nice that you can share the hardship along with the Joy as many people would just keep it all to themselves. Your openness helps many in similar situations I'm sure. God Bless and Merry Fink'mas to you sir!

This is actually the real "Dar" speaking for the first time, commenting on my new loving fiance. Jeffrey went through a real life changing experience, being in a homeless situation. Both of his parents have passed away to be with our Lord Jesus , a few years ago. Jeff has had to learn to be in the real world , with life challenges, and to make it for himself. His brother and wife took him into their home a year prior. They wanted Jeff to learn how to make a life for himself, and to be more self reliant. He went to bed hungry, was scared at night. He was praying that he could make it through another night, without being robbed of his only few possessions. A few clothes, a camera, that his brother bought him, that was dear to his heart. Jeff loves to take pictures and capture all of his adventures, and taking pictures of his loved ones. He had a bike, his only mode of transportation. The bike was stolen after only a few nights, being in his homeless situation. Jeff told himself that he would not let this situation tear out his heart and sole. He knew that he could and would do so much better for himself. He was able to land a job.I gave him some bus money, so he could get to his new job. I had all the little clothes that he owned, and had them nicely pressed and dry cleaned, that he hid in the bushes at night. I am very proud of this man that I call my own. With a little help from me, he picked himself up, and rose above this situation. I am very proud of him, that he did not give up hope, and went on with life, when so many other homeless folks give up hope, and do not know how to help themselves and get out of the homeless plight. Sincerely, Dar