The winning entry from homebrew competition at Ramona’s first brewery 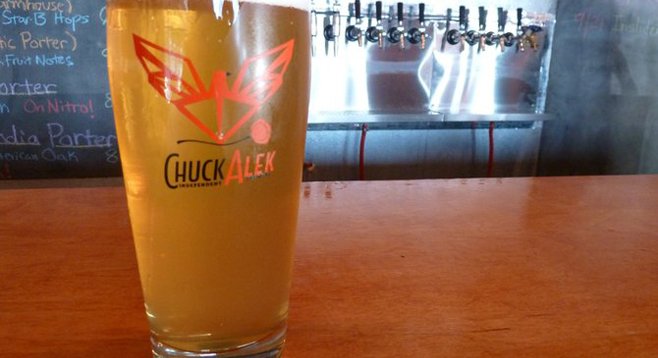 While a new brewery comes across as little more than the ping of a pin dropping in a brewery saturated neighborhood, the arrival of a brewhouse to communities without a homegrown source of fresh beer is a big deal. ChuckAlek Independent Brewers (2330 Main Street, Ramona), takes their status as Ramona’s first brewing company very seriously and, since opening earlier this year, has done its best to bring as much of the craft beer experience to the area.

Owners Grant Fraley and Marta Jankowska have slathered on the elbow grease to construct a tasting room where visitors can spend time getting cozy with their brews. They’ve even lured food trucks—no easy feat in this unincorporated berg—and teamed with their next door neighbor, Bishers Quality Meats,to provide quality edible sustenance. But they haven’t stopped there.

Only a few months into the life of the company, ChuckAlek teamed with Ramona Brew Supplies, The Homebrewer (a North Park homebrewing supply store that's working on adding a nanobrewery component in the near future), Star B Ranch (a local farm producing hops) and Hop Farm to put on the Ramona Homebrew Competition, tapping into the talent of local fermentation specialists while bringing many from around the county to their eastern locale. There were 54 entries in six categories covering nearly every conceivable beer style save for complex, barrel-aged brews.

The victor in this inaugural melee was Travis Hammond’s Oat Soda Munich Helles. Hammond also came in third place in the competition with his Baltic Porter, but it’s that first place Helles that is currently on tap at the brewery’s tasting room. Two barrels were produced, which should provide enough of the brew to last the rest of the month. Expect a beer with a grainy aroma rife with floral German Noble hop notes. A bit of honey-like sweetness comes on after initial light pilsner-like bitterness.