“They could have picked a different day,” says angry parent 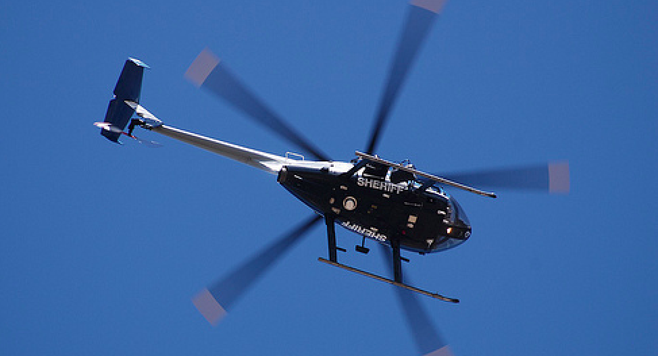 Arriving parents and the students they were dropping off in front of the San Dieguito High School Academy may have been concerned on the morning of September 11.

From out in front of the campus at 800 Santa Fe Drive, one could not help but notice the numerous sheriff’s patrol cars heading west. Although without their sirens on, it was very clear, said witnesses, that the cars were traveling in unison at a high rate of speed.

More neighbors became concerned as the sheriff’s helicopter circled over the Cardiff and west Encinitas communities for almost an hour. A call to the sheriff’s media office stated that there was no major crime in progress; it was just “an operation, but nothing important.”

Several parents stated they were very concerned, knowing that their kids were attending one of the five schools underneath the helicopter’s flight pattern. “They could have picked a different day than 9/11,” said an angry parent I spoke with after learning there was no danger to the schools.

On September 12, Encinitas sheriff’s officials confirmed that the show of force was part of Operation Neptune, a North County sweep to check up on over 50 parolees on probation. The operation, while focusing on the Encinitas and Leucadia areas, included checks as far east as Rancho Peñasquitos and north to Vista. (One may speculate the name of the operation came from the long, bluff-top street in Leucadia — Neptune Avenue.)

The helicopter was used to assist in case there were any problems, and SWAT teams were standing by if needed. Of the 15 people arrested for parole violations, which included weapons or drugs, 7 were from Encinitas.

Over 70 deputies from sheriff substations around the county participated in the five-and-a-half-hour operation — what a published report labeled “a proactive approach to ensure those on parole and probation are complying with the conditions of their release.” The checks may also help in future investigations into theft and drug crimes.

Because they could. Why did San Diego sheriffs choose this day to create a show of force, completely out of proportion to their "operation"? Because they could. Why did 70 valuable law enforcement members turn out to "check up on" 50 parolees, a ratio of more than 1:1? Because they could. Why were law abiding citizens, parolees or not, disrupted while this show of force went on? Because they could. I wish I could say I feel safer, or more secure, or proud of those men and women who participated in this event. I can't. I think it was overkill, a word which describes the events of September 11, 2001 and which describes the "operation" as well. People on parole live under considerable constraints, greater than those in prison though they are "at liberty" in society. Many are homeless, some wear GPS monitors, most are unemployable. (When was the last time you hired a convicted felon?) They do not pose a threat to persons or property by reason of their status. If they were being "checked up" on, why was that not done by their parole agent(s)? Thank you for the reporting -- this is a stomach turning story. A battalion of cops, helicopters, and SWAT teams - checking up on people who have served their time and done nothing to merit such intense, overblown scrutiny. No, I don't feel safer. I feel disgusted with a blatant display of unnecessary force, and a waste of resources,.

Gotta love Sheriff Gore. Maybe citizens should set up a Hot-line to report missteps and coverups of our former FBI agent now-Sheriff.

Usually, when you spot a flotilla that large, they're on the way to a location somewhere in the state to honor a fallen comrade with the overtime pay, fuel, food, lodging, wear and tear on the vehicles etc. all funded by your taxes. Ah, pomp and circumstance in the State of Policeifornia.

Um, no, not so much. "Sheriffs" is plural, but there's only one sheriff in San Diego County — Bill Gore. This what we in the editing biz call a "hed bust" (and yes, that's how it's spelled in newsroom lingo), which is any badly written, misspelled, misleading or otherwise inaccurate headline.

Thank you for the article. I was curious what was going on. I leave it to those whose responsibility it is to protect us and have the knowledge of these parolees to decide what is best for public safety.

Litning implies they know the history of these convicted felons. I highly doubt that! But at least you found a forum to get out your worthless rant. Thanks for nothing. With over 25% being in violation of their parole that should be enough to warrant the actions taken.

Duhbya. Really? You're bothered by those who are sworn to defend us showing support for someone who gave their life in the line of duty, defending us? REALLY?

Submariner Get a life! Who knew that by the author reporting on this event he would bring out such ungrateful loonies. Now go ahead and correct me and tell me what I meant to say (you must be great at cocktail parties).