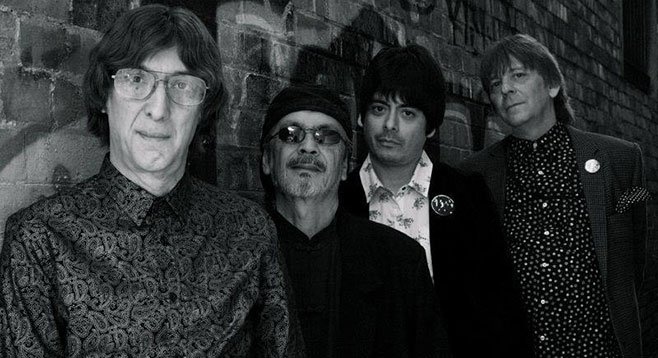 South Bay drummer Victor Penalosa has scored a plum gig, holding down the beat for Bay Area–based favorites the Flamin’ Groovies. The influential band first emerged during the late 1960s, with a string of their mid-’70s tunes, such as “Shake Some Action” and “Jumpin in the Night,” now considered garage-rock classics. They’ve had several line-ups during their existence, but today’s features their most popular ’70s frontline of guitarists Cyril Jordan and Chris Wilson, bassist George Alexander, and now drummer Victor Penalosa.

Since the band originally disbanded in 1992, they’ve played a handful of dates, but they are now ramping up activities. Penalosa’s first tour with the Flamin’ Groovies, which began in April, included a music festival in Australia as well as sold-out shows in Japan and San Francisco. He was asked to join full time following the tour.

In addition to drumming for the Flamin’ Groovies, Penalosa fronts local rock quartet the Phantoms. Over the past two decades he has spent time with several combos, including Quarter After, Riot Act, Baja Bugs, and transplanted UK ’70s pop rockers the Records (“Starry Eyes”). He also toured as a member of the Zeros, subbing for his brother Hector on a run through Spain in 2001.

Penalosa came to the Flamin’ Groovies via Bay Area band the Magic Christian. “I met Cyril [Jordan] in 2006, when I was living in L.A.,” Penalosa tells the Reader. “I had never seen any of the Flamin’ Groovies live or met any of them, but there was a little blurb in a local paper about the Magic Christian, so I went and saw the show...I think it was at the Kat Klub on Sunset Strip. I just went down and took my ‘Shake Some Action’ record to have autographed. Prairie Prince was on drums. I went up to them at the bar after the show and told them they were one of my favorite bands ever and if he ever needed a bass player or a drummer, here’s my number.”

Penalosa got the call when Prince joined up with the revamped Todd Rundgren–fronted Cars.

“[Jordan] sent me a CD, I learned the songs, and I headed up to San Francisco.” Despite sold-out shows, the commute from Los Angeles eventually got to be too much and he gave up his drum throne.

Since relocating back to San Diego, Penalosa was wrapped up with his new band, the Phantoms, when Jordan called out of the blue eight months ago. “He said he was getting the Groovies together and he asked me if I wanted to do it. I said, ‘Hell, yeah!’”

His next two tours are already set, brief jaunts running through December, which will take the band through the East Coast, Canada, Italy, and Spain. They have also started work on a new album. “When we came back from Australia, we went straight into the studio and cut three songs. That seems to be the plan: get the guys together, tour, record, go home.” He plans to continue to call San Diego home and focus on the Phantoms between Groovies projects.

Though now a veteran of two tours with the group, Penalosa is still a bit in shock from joining up with his musical heroes. “It’s pretty unbelievable,” he says. “I grew up loving this stuff. I told Chris, ‘You really have nothing to worry about, this stuff is in my DNA.”

Penalosa will perform with the Phantoms at this year’s Adams Avenue Street Fair, Saturday, September 28 on the Casbah stage.