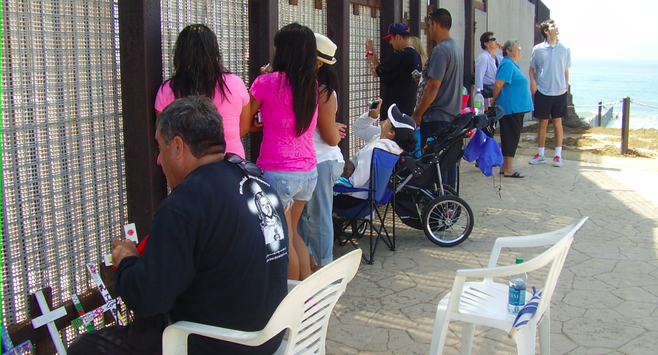 People brought their memories and respect for Micaela Saucedo to Friendship Park on Sunday, September 8, for a small, sweet remembrance of the woman who worked to help the deported, displaced, endangered, and lost along the U.S.-Mexico border.

"She never put herself first or in front," said Carmen Escobosa. "She was always too busy giving her attention to others to ask for herself. No one knew how sick she was —because she was busy taking care of other people."

Saucedo died September 1 from cancer. She was 67, the executive director — founder, really — of Casa de Refugios Elvira, a shelter for migrantes in Tijuana. "She was a relentless activista, she was driven by her sense of the need for justice in the world," said Enrique Morones of the Border Angels, a group that delivers water along the border to prevent deaths of immigrants. "She was a true leader — someone who didn't look for attention for herself but for the people she cared about."

Saucedo, an activist during her younger years, was a nurse before she retired. She was born in Jalisco and came to Tijuana more than 30 years ago. According to Morones, she had been active supporting Bert Corona, one of the original migrant workers' rights activists and a peer of Cesar Chavez. But after Corona's death in 2001, she meant to retire from activism.

"She saw what we were doing with Gente Unido in 2005,” said Morones, “and she came to Chicano Park when we were having an event there. She walked up to me and said, 'I used to be an activist, but I retired. When I saw this thing, I want to be part of it.'"

Saucedo became Morones’s right hand, he said. He called her "comandante" and she always corrected him: "sub-comandante."

"She was always behind the scenes working very hard," Escobosa said. "All the immigrants living by the river consider her their mom — their families would call her because they knew she was keeping their loved ones alive."

Saucedo was active in Border Angels when San Diego was besieged by the Minutemen —about 200 of whom descended on Campo in 2006, Saucedo was there every day.

"Her and Vicente Rodriguez stayed in Campo every night until the Minutemen went home," Morones said. "And she helped organize the first march to support immigrants [a national demonstration] in 2006 and marched every year since."

Saucedo founded Casa Refugio Elvira — which was named after Elvira Arellano, a young woman deported after she left the shelter of a Chicago church. At first, the shelter housed women and children, but Saucedo had recently expanded into a new location, hoping to be able to include men in the shelter, since they are the largest group of deportees.

"She had recently become interested in the people living in the canals, who are mostly deported migrants," Morones said. "For the last year and a half, she worked with Border Angels to feed and clothe and bring blankets and sustenance to them."