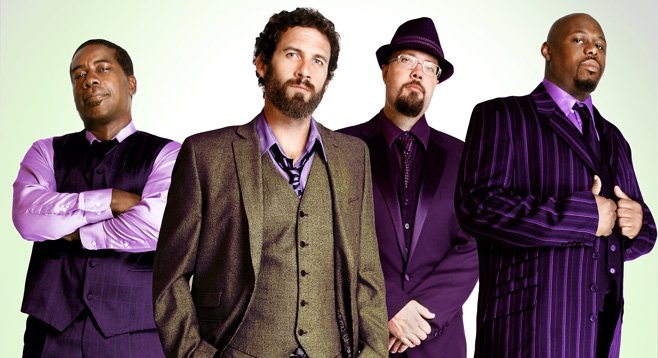 Funk mined from the best days of funk, meaning the music that was made during the ’80s R&B revival days by the likes of alto saxist Maceo Parker and bigger horn-band acts like Cameo. Jelly Bread has wah-wah guitar and man-falsetto and the manner of drumming that can only be played by humans with rubber arms. This is a basic four-piece rhythm section with a Hammond B3 organ and when they call in the horn section, it gets real. But the band can junk all of that and go swampy with the Mofro and Tony Joe White sounds coming out of an electrified violin and a lap steel guitar, and that works too. Did I mention that there’s an alt-rock flavor on top all of this strange foundation? To the uninitiated, this may seem disjointed. But we’re not talking about a band trying to find its way in public here. Jelly Bread set out to be this conflicted from the beginning, and that’s why their no-limits approach to music works.

The band is from Reno and they’ve nailed some of the regional awards available to them: a Reno news rag voted their second album No Dress Code best album of 2012; they were named Best of Northern Nevada twice running. Jelly Bread is vocalist, guitarist, and lap steel player Dave Berry, drummer Cliff Porter, bassist Brady Carthen, and Eric Matlock on keys. These four have figured out how to take bluegrass-based harmonies and chump them up with organ-powered gospel and soul and make an enjoyable product fueled by infectious grooves that don’t seem so patently red state vs. blue state after all. Other critics have said it, and I agree: Jelly Bread is a band that is one hit record shy of a national career. Until then, enjoy them on the festival stages they tend to land on. The perfect band, in fact, for a rib cookoff.

They had me at the funky purple suits.