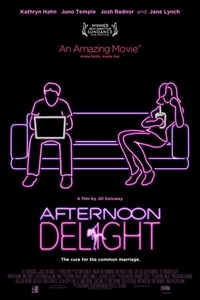 Matthew Lickona: How did you pitch this film?

Jill Soloway: A mom rescues a stripper and realizes that she’s the one who needs rescuing.

ML: So Rachel (Kathryn Hahn) is the mom in that sentence, and McKenna (Juno Temple) is the stripper. Rachel strikes me as haunted. Is she? If so, by what?

JS: I think she’s haunted by a lack of connection to her soul. Anxiety is sort of a version of soul death. Anxiety is like this thing: “I’m spinning in my head, trying to figure out what matters, and nothing matters. Nothing’s landing. Motherhood isn’t landing. Couplehood isn’t landing. I’m spinning and I can’t land myself.” I do think that Rachel is searching. Bringing McKenna home is her just trying to reconnect to her body, looking for that connection between her heart and her womb.

ML: Can we talk about the mechanics of bringing McKenna into her home? Rachel approaches McKenna at the coffee cart and introduces herself as someone who got a lap dance from her. If a man ever went up to an off-duty stripper and said that, it would come off as kind of stalker-y.

JS: But because she’s not a guy, it isn’t. The diversion is, “I’m a mother. You’re a kid. We’re both women.” A woman getting a lap dance can pretend to be a man, but she can also experience that feeling of sameness. “We’re not different.” We question the notion, “What do these women have in common? One’s a Madonna, one’s a whore. Do they still have a relationship with each other?” I think Rachel convinces herself of the mother-daughter thing as a reason for staying in contact.

JS: I think McKenna thinks she’s helping Rachel a little bit. “This woman clearly needs something.” And she has nowhere to stay.

ML: But when she goes back to sex work, Rachel feels betrayed. Does McKenna get that?

JS: McKenna has just gotten a call from her mother, who’s crazy and is a drug addict and needs money. She and Rachel are playing a game: “I’m mom and you’re my college student who’s come home.” And McKenna says, “Fuck it. I’m not going to play this any more. I have to take care of my mom.” To me, it’s this feminist generational thing — the stay-at-home mom has the privilege. McKenna comes from the working class. She has to work for her money. She doesn’t really want Rachel’s money. There’s a divide.

ML: Sometimes there is a scene in a film that feels like the germ of the whole movie even if it doesn’t sum up what the film is about. For me, the story Rachel tells when she gets drunk — about having sex her freshman year at college and then getting an abortion and dropping out — felt like that kind of scene.

JS: You know, I sometimes look at the whole movie as a parable of second- and third-generation feminism. When I was in college, I was a second-generation feminist. This was pre-sex-positive feminism. We demonstrated outside of porn stores. Sort of Ms. magazine, “I’m not an object,” access to birth control, abortion rights. We were reading Andrea Dworkin, and it was a feminism that was very disconnected from our sexuality. We were just beginning to learn about sex-positive feminism, the Susie Brights and Nina Hartleys, the women who were saying, “Sex workers are people too.” That was just beginning. I look at that time in my life...and the two things discussed in that scene are consent and abortion. This notion of having sex with somebody when you weren’t sure you wanted to, not really being able to say no because you actually had no idea how to say yes.

ML: Rachel rejects the idea that she was raped.

JS: Right. She’s like, “No! Nobody asks in college.” It’s college; people don’t ask. You just find yourself — you know, you meet some guy, you’re kissing, and “Oh God, it’s in. He didn’t ask. I didn’t say yes. I didn’t say no. We’re doing it.” Because you’re 19, and you’re not even really able to claim desire at 19. There was no place for desire in that feminist narrative. There was only sort of, “Don’t look at me. Don’t look at women.” What’s happening underneath in that scene is, she’s talking about abortion — and this is going to sound incredibly cheesy — but at one point I realized, “Oh, McKenna is her abortion.”

ML: Well, it’s not so cheesy, given that she opens the conversation by asking, “Does anyone wonder what their aborted children would have been like?”

JS: Right, and then we cut to McKenna and she’s dancing with the men. And she’s about the right age. I do think that in some ways, third-generation feminists are the daughters of second-generation feminists. We gave birth to them, with the pill and with Sex and the City and with Fuck-Me Feminism. Now there is a whole generation of women who consider themselves powerful and who like to wear five-inch heels and take pole-dancing classes. Whether they have it all or want it all or are forced to want it all, who knows?

ML: Speaking of sex: in my notes, I’ve got, “Rare to see married sex not played for laughs.”

JS: I do feel like I’m good at sex scenes, and that, as a woman, I have a responsibility to write and shoot sex, because I can and I’m not scared of it. And so few women are directors, and so few people will say, “Let’s walk into the most uncomfortable moment, the sexual moment, and show what it feels like from a woman’s point of view.” I know how to shoot it and how to make it meaningful and funny and sexy. But I don’t know whether I want that on my tombstone, like I was some sort of pornographer.

A bit that didn't make it into the print edition:

ML: Tell me about the idea of the eyes-open orgasm.

JS: I had some friends who were bragging to me: "Oh, my God we had the best sex last night. We came at the same time, staring into each others' eyes." And I was like, "F--- you."

ML: I get that reaction. But then you went and used it in a meaningful way.

JS: Yeah, but I don't think it's ever going to happen for Rachel again. The next time, she has to go back to imagining Michael Fassbender naked or whatever. I did feel a little bit bad about having things add up so well for Rachel and her husband, when in real life, marriage has cycles. Anybody who knows marriage knows there's another cycle to go through. You get these moments of connection, and then you go through the rest of your life. Also, the fact that they were smoking pot is not a good sign for them. They aren't really that healed.

Thanks for including that extra bit, Matt. I enjoyed the interview in the print addition, and was happy to see this part here. Although I am bothered by the lack of stars you gave the movie.

You're most welcome, Mr. Wolf. I'm terribly stingy with stars, I grant. Like O'Connor's Misfit says, there's no pleasure but meanness. But seriously, two stars means I liked some things about it very much.

You're on par with the other critics. It's not getting the best reviews.