Ten great dishes (and the places that served them) 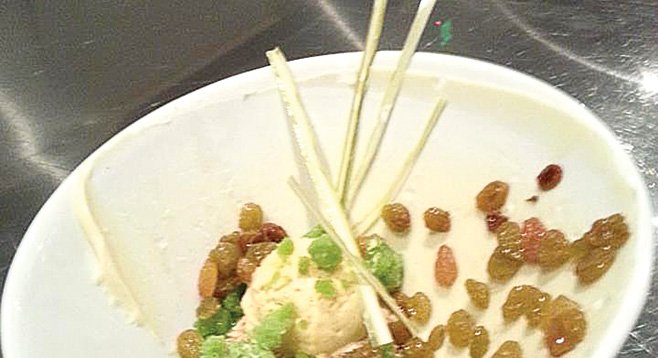 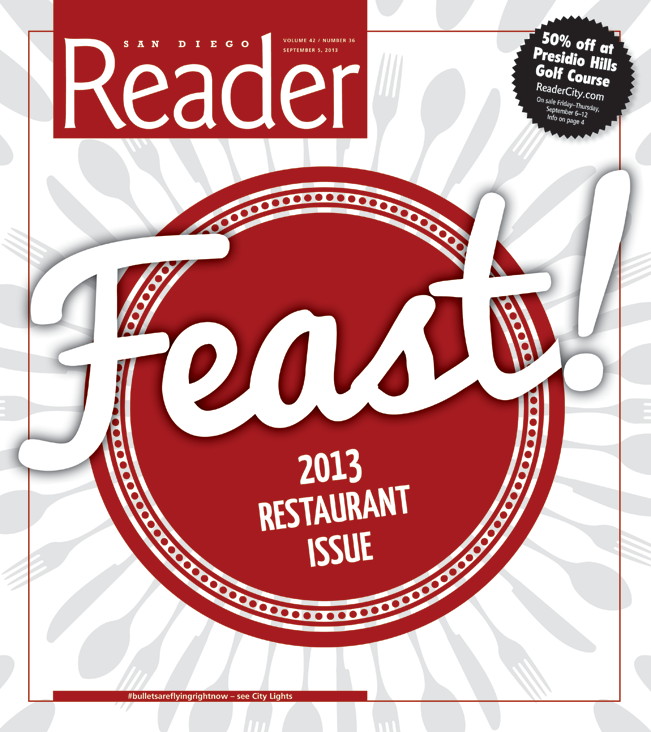 For this list, I have decided to use not great restaurants but great dishes. It gets a handle on ten local restaurants by looking at some of the best individual dishes I’ve eaten in the past year or so.

Tour de Cheesesteak commandeered a huge amount of my time, energy, and willpower last year. In my eyes, Jin’s emerged victorious as the king of cheesesteak sandwiches in San Diego. It may be a random, Sports Arena hole-in-the-wall where lettuce comes standard on the Philly sandwich, but hot damn does Jin grill up one heck of a sando! The fact that practically nobody has ever even heard of the place makes it all the more mysterious. How does something this good slip under everyone’s radar? Maybe because nobody wants to bash his car over Midway potholes for a cheesesteak. Oh yeah, Jin grills chicken, burgers, and pastrami, too. All cheap, all rad.

Cardamom is one of the trickiest spices to use right. Overdone, it tastes of soap and nightmares, but a perfect touch with cardamom can take any dish into excelsior territory. Lofty Bean’s baristas — certified coffee dorks to a perfectly coiffed north county soul — manage to marry the Italian classiness of a perfect latte with the spicy kick in the junk of Turkish coffee. Of course, the rest of the coffee shop’s offerings make coffee snobs drool with envy. Single origin espressi and pour overs, Kyoto process iced coffee, and $2 French presses for those who eschew expensive java. I never pass through Encinitas without stopping at Lofty Bean.

Describing great Edo-style sushi demands exactitude, which fits such simple and perfect food. Tadokoro’s zuke tuna — akami marinated in soy sauce and served with a fermented pepper instead of wasabi — contains more flavor in one $3 bite than any overblown sushi roll smothered in eel sauce and fried crunchies could even hope for. Every other piece of sushi at this cozy, poorly located, old-school sushi bar is a miniature work of art. Anyone wanting a hands-on (seriously...put down the chopsticks!) education in sushi can get one the old-fashioned way at Tadokoro. Just forget the price, belly up to the sushi bar, and start ordering. 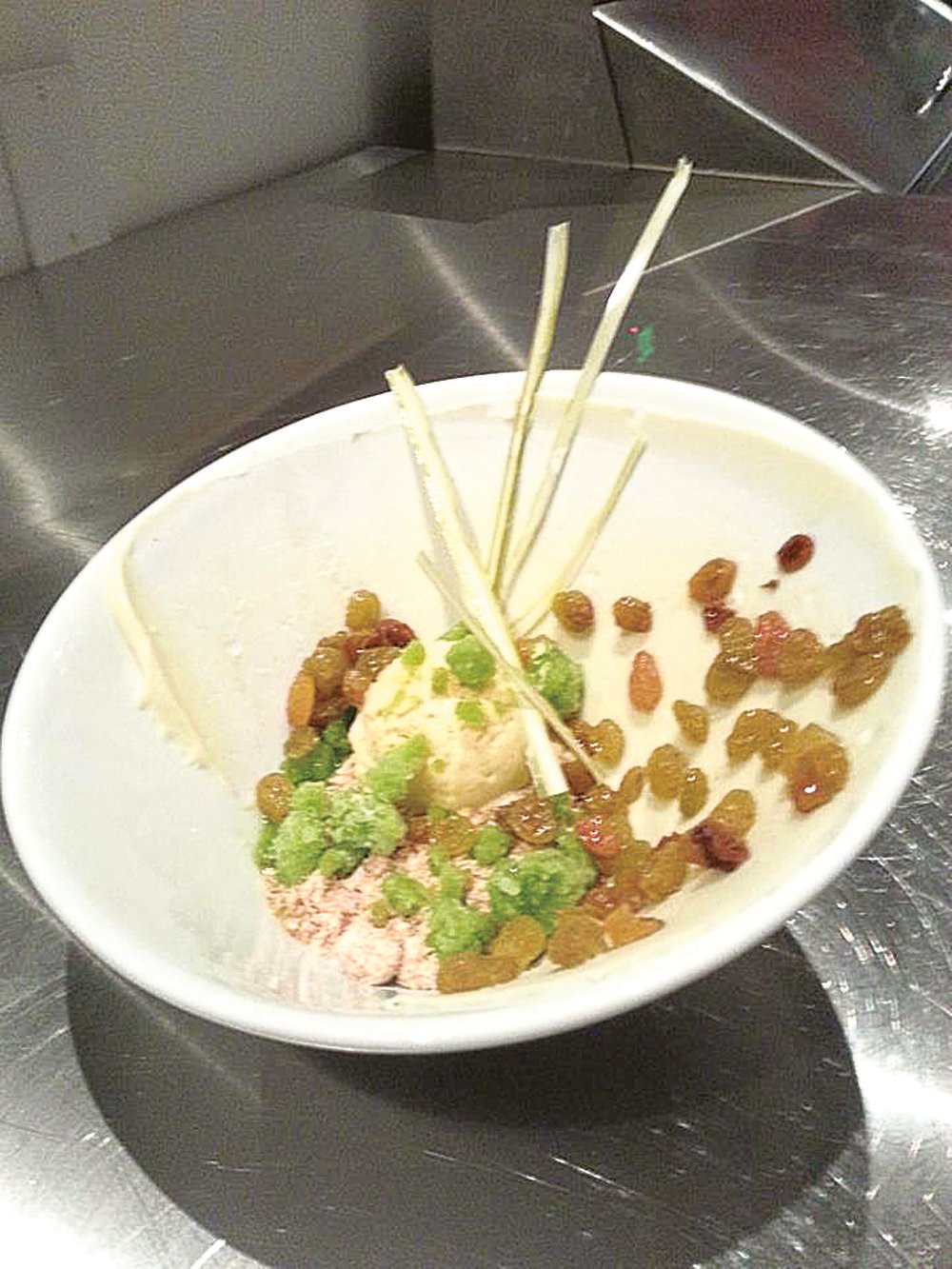 Yeah, maybe they no longer even have the “ants on a log” at North Park’s unexpectedly brilliant dessert bar, but the combination of celery ganache/granita, rum raisins, and peanut butter “dust” blew my mind wide open for less than ten bucks. Rest assured, everything else at Swoon represents a melding of inspiration and execution fit for fine dining. These desserts warrant Michelin stars (which they will never receive due to the unfairness of the world), and I would be hard-pressed to think of a better place to take a date for great coffee or tea and a slice of deconstructed cake.

Socked away in a Miramar industrial park, Punjabi Tandoor has some of the best northern Indian curry dishes around. But the restaurant also had some of the best pickle I’ve ever had. The best dish in all of Indian food, by huge leaps and bounds, is the pickle. The salty, oily, fermented fruits and veggies are one of the world’s great palate wallopers. The briny, spicy burn of good pickle is the perfect counterpoint to rich curries, and Punjabi Tandoor put a huge pot of lime pickle (laced with carraway seeds) out for the taking. Also, get the chicken tikka. Not chicken tikka masala. Big difference. The former is way better, and, wrapped in a piece of naan bread with a chunk of pickle resting in there to zip things up, it’s one of San Diego’s best bites of Indian food.

I seldom get to feel like an Aztec nobleman. It’s one of the downfalls of the guero lifestyle. That said, drinking pulque (fermented agave sap) at Chula Vista’s premier lamb barbacoa joint gave me a chance to connect, gustatorially, with the pipiltin. I realize that’s a pretty tenuous link, but pulque is damn tasty and Aqui es Texcoco is the only place to get it. They serve it straight up, or prepared with fruit and nut flavors. The taste is one of a kind, musty and fermented, sour and sweet, and it goes well with the lamb plates that have given Aqui es Texcoco its deserved reputation. Those lamb plates, by the by, are a masterwork of build-your-own-taco deliciousness.

Midwesterners talk lovingly of “Juicy Loosey” burgers, i.e. hamburger patties stuffed with cheese before grilling. Sherman’s Shack takes that to the next level and beyond, stuffing a “surf n’ turf” burger with shrimp and cream cheese. They also fill burgers with bacon, cheddar, and pulled pork; or maybe blue cheese, mushrooms, and onions; depending on one’s whimsy. The other thing that Sherman’s gets right is charging a reasonable price for a burger (about ten bucks) and including the fries, rather than surreptitiously driving the price skywards with “additions” to a bare hamburger. The tacos at Sherman’s are also pretty good, but it’s that burger full of shrimp that keeps me coming back.

Just thinking about Vietnamese sandwiches makes my head swim. The way the ultra-crunchy bread crust yields to chewy crumb. The tangy mayonnaise and savory meats that wait inside. The pickled veggies and fresh herbs. Banh mi are special, and the Paris Bakery is the king of banh mi. Until recently, the bakery had a vaguely sketchy, bulletproof store on El Cajon Boulevard. The storefront just moved across and up the street a bit, to a shinier second location, but the sandwiches are still the best and the “buy 3, get 1 free” deal still encourages eating lots of amazing banh mi. Pork, chicken, egg. Whatever. All delicious.

Luigi’s pizza gets it done with thin crust, minimal grease, and a bevy of delicious toppings. But the best slices are the ones with huge globs of ricotta cheese on top, and the best of the ricotta pies is the slice with jalapenos and pineapple alongside the creamy ricotta. Something about the combination of sweet/creamy/spicy toppings just rocks my socks. Being able to get everything as a slice, with a cup of soda or a beer for a nominal extra charge, just ices the cake.

Most beach bars make a living serving up beer and sugary cocktails to collegiate drinking machines. There’s no harm in that. I’m certainly not one to scoff at a bit of recreational drinking and whomping out to loud-assed club jams. But I don’t usually head to Pacific Beach looking for a tasty meal. That said, Duck Dive’s french fries, fried in honest-to-goodness duck fat, are off the chain. There is no more sacred medium in all of frying than duck fat. “Liquid gold” imparts a mysterious, savory goodness to something as lowly as a potato. All of Duck Dive’s surprisingly extensive menu is better than average beach bar food, but the duck fat fries are worth a special trip. After that, order some sterno-powered S’mores for the table. You’re in a huge P.B. bar. That counts as dinner!

Three of these places sound like where I'll have my next meals. If I could only stop drooling on the computer

Dinner's thirty minutes away. Mr. Wolf will be there in ten!