GG Allin and GWAR had a baby, and they named it Sloat Dixon 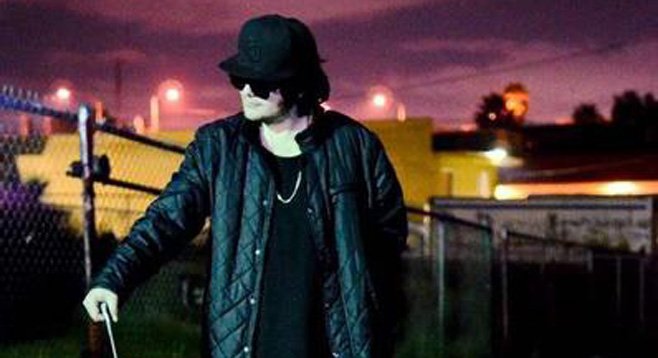 At Mission Bay High, Sloat Dixon sported a mohawk and played in punk bands such as Common Ground and Black Republic. Now he plays drums for Yuma-based cow-punk band the Tramplers.

Thanks to a random hookup with a rap band in Northern California, Dixon has the opportunity to bridge the gap between punk and rap, which he calls “mosh pit hip-hop.”

“I want to be the GG Allin and Gwar of hip-hop,” says Dixon, 27. “If they were to have a baby and it came out listening to Wu-Tang Clan that is Sloat Dixon.”

Dixon says his life experiences connect him to the “gritty grime” that’s a foundation for punk and hip-hop.

“I live in a trailer park in Mission Bay. I dealt with struggle my whole life. Both of my parents are disabled. I take care of them. I’ve seen every single person I grew up with go to jail or become addicted to drugs. I now try and do everything legally and make things happen so I can take care of my family.”

Dixon says he discovered rap when he moved to Oakland two years ago to follow a job offer and ended up answering an add to play for a rap band. “I had a job opportunity that didn’t work out. But when I was there, I started playing drums for a hip-hop band.”

His interest in hip-hop stayed with him when he returned to San Diego.

Now Dixon performs freestyle backed by a DJ, but, he says, “I’m interested in putting together a band. If you’re interested, come see me.”

Dixon would rather not be compared to Kid Rock. “I draw a lot of inspiration from rappers like Danny Brown or Action Bronson.”

Dixon admits that coming up with tags for his cross-genre pollination is a lot easier than getting music fans to accept it.

“There’s a lot of resistance. Kids who love rap hate punk. Kids who love punk hate rap. But hip-hop is just a bridge of old jazz with a beat, and rock is a blend of R&B and blues...I want squealing guitars, heavy bass, and rap and put it all in a blender and have it coming out squealing.”