Trucker has heart attack while entering freeway in Encinitas 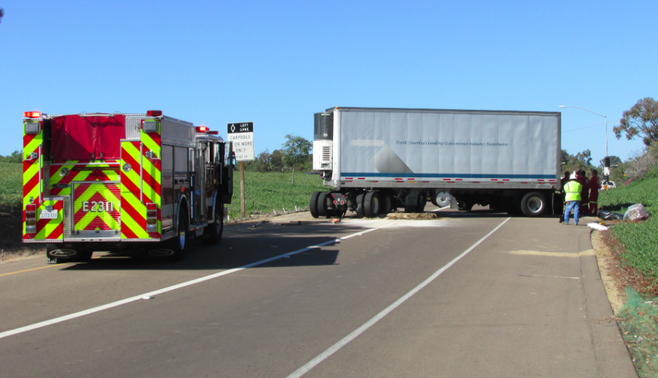 The northbound I-5 on-ramp at Encinitas Boulevard was closed for almost four hours on October 30. The driver of a semi-truck, accelerating up the ramp, reportedly had a heart attack. As the driver tried to pull his rig over into the ramp’s emergency lane, the truck rolled back down the ramp, causing it to jack knife.

As it rolled backward, the jackknifing truck cab punctured one of its fuel tanks. Fortunately, a Caltrans maintenance crew, based out of Carlsbad, was on the other side of the freeway; they were conducting a southbound "sweeper train," cleaning the inside lanes, when the emergency call came in.

The arriving crew was quick to contain the diesel spill and keep it out of storm drains and nearby Cottonwood Creek. CHP, Encinitas Fire Dept., and San Diego Haz-Mat also responded.

Before the 20-ton truck could be moved, the remaining fuel needed to be siphoned out, but the tanks were inaccessible due to the positioning of the crashed cab.

Caltrans crews eventually drained the tanks, and the ramp reopened by 2:30 p.m. The truck was towed back to a shipping yard located in San Ysidro. A CHP officer on the scene said the driver was alive when loaded into the ambulance.

Ken, you mention "gasoline" here, but a rig like that one is far more likely diesel powered. That we can't see the tractor in the photo makes it hard to be sure. Was it gasoline, or diesel?

Looks like story already corrected to read "diesel," which comes from a "gas" station. :) A diesel spill is horrible because of its high oil content. Cars will act like a giant Slip N Slide once tires contact diesel fuel on asphalt. I ran over one once and it took me almost a mile of very slow driving to get the slippery-ness worn off my tires. Gasoline - not as much - just light a match and poof - its evaporated. Don't try this at home kids. Its makes the CARB bureaucrats go nutso.

Thanks for clarifying. Diesel and gasoline are two very different things. "Gas" can explode, but it evaporates quickly. Diesel is oily and hangs around. The odor from diesel is most unpleasant, too.