Rumble at the Hyatt 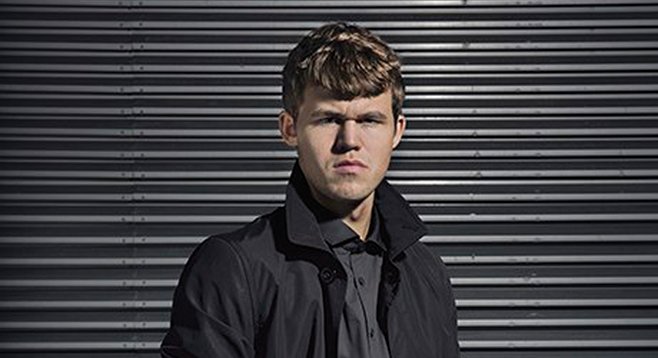 A friend, who has been a serious chess player, recently emailed me, “I don’t know if you have any interest in covering professional chess, but something pretty epic is happening right now: a Westerner is the favorite to win the world championship this November. If so, it’ll be the first time since Fischer’s 1972 match in Reykjavik.

“The challenger is a 22-year-old Norwegian, who has also been a model for some pretty big fashion companies.... The current world champ is a nice guy and a total genius. Everybody calls him Vishy.”

Okay, sports fans, the 2013 World Chess Championship is upon us. The match sets the current and five-time world champion, Viswanathan Anand, 43, against Magnus Carlsen, a certified child prodigy. At 13 Carlsen was a grand master, at 19 he became the youngest player to be ranked number one in the world, and became, in 2012, the highest-rated player in chess history. As life bonus, Cosmopolitan named him one of “the sexiest men of 2013.”

A 22-year-old fashion model and highest-rated player in chess history, earning $2 million a year, is going to see the world from a different angle than you and me. Talking about opponents he finds difficult to play, Carlsen told The Guardian, “Once, at a big tournament, I saw a player I was due to play the next day have a couple of drinks. Knowing that just ruined my concentration, because, I thought, how can I play seriously against someone who has drinks the day before?”

The 2013 World Chess Championship tournament is organized under the authority of the World Chess Federation (FIDE) and runs November 9–28 in Chennai, India. Chennai, formally known as Madras, has a metro population close to nine million and is located next to the Bay of Bengal in South India. But, no worries, South India will be left outside: the games will be played in the air-conditioned arms of the Hyatt Regency Chennai.

Full disclosure: I play chess. If pressed, I’d place my game on the second-grade level. My last opponent was a seven-year-old boy, newly enrolled into the first grade. Don’t misunderstand — the kid is smart, the kid had lessons, and for all I know the kid might have been a cheat. But, I do want to put on the record that I beat him. I did beat him, although, yes, it was a close-run thing.

No matter, I’m always interested in chess when a world championship comes around. Not, sadly, for the chess, but for the weirdness a world chess championship brings with it.

Let’s get to the weirdness. World chess champion Alexander Alekhine (1892–1946) played chess drunk. Grandmaster Carlos Torre (1905–1978) was arrested for running down New York’s Fifth Avenue nude. World chess champion Wilhelm Steintz (1837–1900) claimed he could move chess pieces with his mind and attempted to telephone God. He is supposed to have said he would give God odds of a pawn as Black. World champion Bobby Fischer (1943–2008) observed, “That is nonsense, of course, but I think I would hold God to a draw with White.”

Which brings us to FIDE and its president, Kirsan Ilyumzhinov. Ily started out as a sales manager for a Moscow car dealer, worked his way up to obscenely rich. He was governor of the Russian province of Kalmykia, is a Buddhist, and has been FIDE president since 1995. Ily says he was abducted by aliens in 1997 and has traveled the galaxy in their spaceship.

Here’s the setup: 12 games are scheduled. One game a day with a rest day after two games. Another rest day after four games, another after games six, eight, ten, and eleven. There’ll be tie-break games if needed.

Since this is being played in India, live coverage is going to be dicey. Game one will be played on Saturday, November 9, beginning at 1:30 a.m. PST. You can follow it live at chennai2013.fide.com. Be there.

Rumble at the Hyatt, part 2