In a dark room

The photography of Abelardo Morell 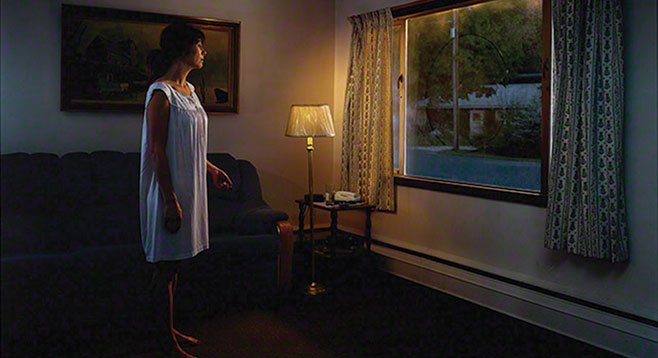 Abelardo Morell: The Universe Next Door and At the Window: The Photographer’s View, on view at the Getty Center in Los Angeles until January 5. 1200 Getty Center Drive, 310-440-7300; getty.edu

When the Cuban-born photographer Abelardo Morell began to attract attention in the late 1990s, the Museum of Photographic Arts in 1998 opened the first major retrospective of his work. Morrell had started out in the 1980s as a street photographer, though that work looks droopy compared to what followed. He didn’t have much gift for the public exposure and expressiveness of street photography. He was by inclination an intimist, and when his first child was born in 1986, he moved his practice indoors and took as subjects toys and ordinary domestic objects, which he photographed with strange, exagerrated inflections.

In the 1990s he began experimenting with camera obscura photography. The principles of the camera obscura were understood in Greek and Chinese antiquity, and drawings of camera obscuras appear in Leonardo’s notebooks. Light passing through a pinhole into a dark room will project and transpose an image of whatever lies outside. In 1991 Morell placed an illuminated light bulb outside a box mounted with a lens: an image of the bulb appeared inside the box. The photo he then made of the entire ensemble has a quaint, instructional, Eureka! effect and is among the many images included in a large retrospective of Morell’s work currently at the Getty Center.

In his camera obscura pictures, interior space becomes a memory-bearer, colonized by what’s outside. A white bedsheet in a nondescript New York City hotel room is darkly glazed with the Empire State Building. Inside the Morell bedroom, houses and trees across the street hang upside down. He layers visual topographies as if they were sheets of film, and his imagery suggests how familiar worlds are haunted and “covered” by other familiar worlds. An autobiographical murmur runs through all this work, and not only because Morell has used his own house as his camera. The alien-ness and layered effects recall his history.

Born in Havana in 1948, as a child Morrell moved with his family to the small seaside town of Guanabo, where his father worked on a naval base. After the 1959 revolution, his father was arrested several times, so the family escaped in 1962 and ended up in New York. Morell started taking pictures in high school. He later said that a camera let him finally “put into images bottled-up feelings of absurdity and alienation, and also joy and delight.” The open-faced ingenuousness of that statement says something about the earnestness and emotional authenticity of his practice. He isn’t interested in hyper self-awareness and irony: his images are closer to magic-out-of-a-box than to crafted deception or conceptual misdirection.

He doesn’t manipulate his photos. He keeps close to the simple mechanics and emotional elementals of his art, which is filled with “houses” of many kinds — museums, books, maps. 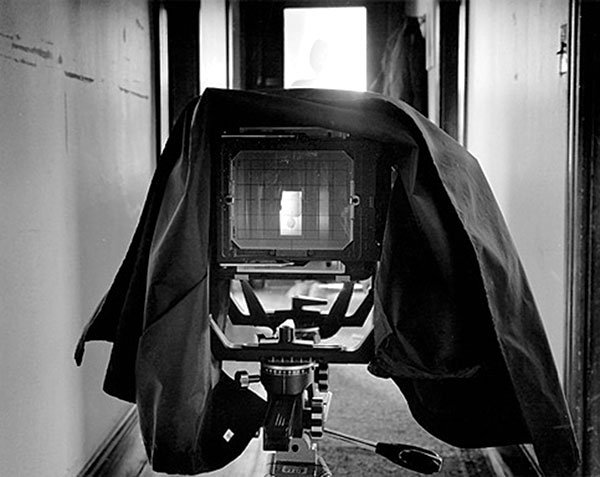 Morell has all along been crafting an autobiography of vision. When his child was born he gave up his anywhere-you-go 35 millimeter in favor of a large-format camera and used it to implement a household meditative practice. Dark, wet, tarry footprints on a linoleum floor after a bath are melancholy testimony to remains, departures, evaporations. An image of his son looking at his shadow cast on a wall is one of the purest Romantic images of our time, a child innocently regarding his own being as a shape of nothingness. Morell turns the conceit on himself in My Camera and Me, a double self-portrait where we see his shadowy ghost in the camera’s viewfinder, and Morrell himself, the “other,” the originating mortal subject, hidden and phantasmal behind opaque glass.

As a child, Morell learned English in part by reading and was especially devoted to Hemingway’s rich, stark style, and books, along with other paper meaning-bearers like maps and money — he calls them “symbolic paper” — have been a major subject. He turns them into rugged, exotic architectures. A 2001 image of two tall, slighty ragged, unstable stacks of bound newspapers powerfully recalls the Twin Towers. $7 Million, a close-up of dozens of stacks of bundled used $100 bills, looks like ruins of some lost cliff-house culture. Books’ exteriors led to interiors. One day, paging through a book on El Greco, Morell noted how light falling on a reproduction turned it into a kind of negative, and this triggered a body of work that I think of as invitations to mystery: partly opened, winged pages recede into the spine, into the promise tucked into hidden margins.

In 2005 Morell started working in color, and he continued to make camera obscura images. One of them, a “four seasons” series, has a kind of homely grandeur: a hotel-room wall is splashed with the greens and oranges and blooms and brushland of Central Park. And in an image of the Manhattan Bridge, light seeping into an empty room bronzes a hallway door and burns its edges with a hot acetylene glare. Most recently he has created a portfolio of what he calls “tent camera” images. He puts a tent on the ground and with a periscope lens photographs from above exterior realities cast on the floor of the tent. These are his most densely textured images, and the color crazes them (in a desirable way). The outer world of desert, mountains, lakes, and canyons mixes wildly and crudely with cracked hardpan, scrabbly moss, pavement stones.

Morell’s work is stately and often purposeful, in that we can usually see how his intentions have been implemented in the finished image. I wish that weren’t so much the case. I’d never wish more id on any artist; its messy dynamics and incoherent energies are powerful creators and destroyers, but I do sometimes miss the shock of uncontrolled subjectivity. His tent photos come close because they look so shaken (while also exquisitely composed) and have all sorts of vague Corot-ish dapplings and disturbances.

One photograph that does look dishevelled and vague was taken from his window: a Christmas-decorated house across the street, a juicy confection of endless strings of squishy lights running up and down and around the gable and windows and stoop, lights that also stud parked cars and the very window through which Morell is making his image. It’s the perfect threshhold for the small, firecracker exhibition the Getty has annexed to the Morell show. At the Window: the Photographer’s View is a short anthology of the many manifestations of windows in photographic art. The first photographers — Nicéphore Niépce, Nadar, Daguerre, Henry Fox Talbot, and others — realized right away that a window isn’t just a subject of the art, it also instruments and determines it: the aperture and lens are both windows of a kind. But the curators of this exhibition are most interested in windows seen and seen through, and windows whose reflections look back at us, and their selections remind us that straight photography, for all its apparent candor and directness and clarity, can also be, like window glass, an empire of ambiguity.

Windows are our second-seers. We hide behind them, hang from them, hide from them. Photography covers all their uses. At the Window offers house windows and their contents — children, flower pots, nudes — and shop windows in which we see through our reflections to the objects of our desire. The car is a camera-on-wheels and its windows are its viewfinders. Through his driver’s side window, Lee Friedlander catches teenagers in a conspiratorial cluster; Todd Hido uses his windshield as an adjustable aperture opened on bleared, snowy scrubland. The killer picture here, by Sabine Hornig, uses the actual frame of a window as the picture’s frame: through it we can barely discern a stripped, wrecked interior without a floor, the messy emptiness haunted by stalwart buildings reflected in the glass. It’s a dark image of apparent security seeded with abandonment.