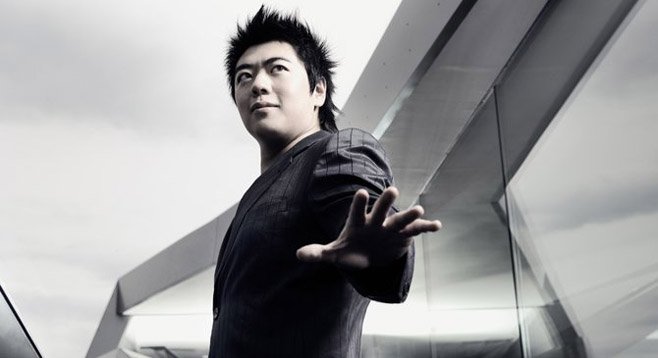 I waited with anticipation for Saturday night’s concert at the Jacobs Music Center. It was sold out. There is nothing I love more in this world than a sold out concert at the symphony. The energy in the lobby was thick and loud.

However, my anticipation soon decayed into apprehension. Why were all these people here? Why aren’t they here every week?

I took my seat and proceeded to eavesdrop on the conversation happening behind me.

I caught phrases such as “he’s a rock star,” “I’m from Sacramento,” “the lecture said the Russians came out of nowhere,” and “remember that movie Shine about the Rach 5?”

My apprehension increased and, by the by, Shine was about the Rach 3.

We were all waiting to hear Rachmaninoff’s Piano Concerto No. 2, the Rach 2.

We were waiting for the Lang Lang experience.

When I heard Lang Lang last season on Beethoven’s Emperor Concerto I was initially seduced but quickly learned the error of my infatuation when Garrick Ohlsson came to town the following weekend.

I was hoping that Lang Lang would be better with Rachmaninoff than he was with Beethoven. My hopes were dashed and destroyed and then burned and then the ashes of my hope were scattered over the eternal flames of Mt. Doom.

If Lang Lang is the future of classical music then, to borrow from Ivan Karamazov, I “respectfully return my ticket.”

Let me clarify that.

If Lang Lang is the future of classical music then I don’t want to be involved.

But what do I know? The house was full. People jumped to their feet to bang their hands together incessantly. Lang Lang played an encore for Maestro Ling’s birthday and the two shared a big hug. The audience adored him. People were exposed to classical music and what about the children?

Ah, but what did the audience know? At least one of them thought there was a Rach 5.

What bothers me so deeply about Lang Lang?

He made a sweeping gesture to a wall full of recordings and said, “There is too much truth here for me to be concerned about such trivial things.”

So what bothers me about Lang Lang? I find his playing to be untruthful. I won’t go so far as to say it is dishonest but it is, no doubt, less than the truth. I’m not talking about his blatantly staged mugging. I’m talking about the way he plays the piano.

What he did to Rachmaninoff was, to put it mildly, weird. To put it harshly, it was atrocious. There was a section in the first movement where he manipulated the rhythm to such an extent that it sounded as if he was in a different meter.

He was so out of touch with the orchestra at the top of the second movement that the woodwinds struggled to play their duets with him. Then he threw them under the bus by looking at them as if to get them back on the correct page.

When it came time for the most magical, tender, and moving moment of the second movement, Lang Lang pounced on it and played aggressively, which isn’t how it goes. This wasn’t an issue of interpretation, it was an issue of disregarding the intentions of the composer for no acceptable reason. There is no reason to treat Rachmaninoff like that.

In the third movement his fingers fumbled and played a glaringly wrong note. Under normal circumstances I wouldn’t care. If Lang Lang is going to rewrite Rachmaninoff then it better be technically perfect and it wasn’t. Lang Lang’s technical ability is no better than other world class pianists and in some ways might be inferior to the techniques of his peers.

He also played ugly. I have never heard a more glaring lack of legato playing at this level. It’s not that he can’t play beautifully. He chose not to play beautifully. Lang Lang talks a great game. He says all the right things about performing but he is unable to walk his talk.

The San Diego Symphony Orchestra is better than Lang Lang and it hurts my heart to know they will be playing with him at Carnegie Hall and on tour in China.

We'll talk later about Lang Lang being a "brand ambassador" for the likes of Montblanc and Rolex.

The included video is how the Rach 2 "goes."