Cost of placing measure on the ballot could cost over $15,000 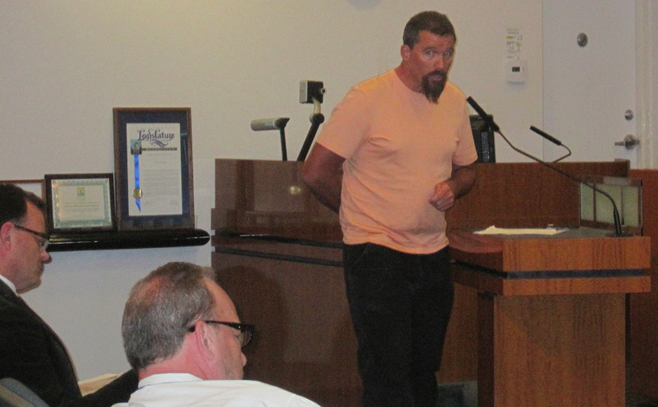 The La Mesa City Council on October 22 voted 3-2 to postpone for 60 days a decision about whether to place vice mayor Kristine Alessio's term-limit measure on the November 2014 ballot.

The delay allowed for more "vetting" by the public, said councilman Ernest Ewin. He served on the council from 1985–1999 and was reelected after running for office in 2010.

Alessio and councilwoman Ruth Sterling voted against Ewin's motion to defer action on the ordinance that sets a maximum of three consecutive four-year terms for the mayor and councilmembers elected "on or after November 2014." After three terms, incumbents could not return to office for at least two years.

When Alessio brought the ordinance to the October 8 meeting, the council voted unanimously to delay action for two weeks in order to get more information on issues such as costs.

"We need to put this on the ballot and let the people decide," said Alessio, who was elected to her first term in 2012.

If the council didn't schedule a public vote, Alessio asked city attorney Glenn Sabine if people could circulate two term-limit petitions, one for the mayor's office and the other for councilmembers; Sabine said that process was legal.

Term-limit supporters include the La Mesa Citizen Oversight Group. Bill Baber, a La Mesa–Spring Valley school board member, spoke on the group’s behalf, saying, "If the president and governor can get their job done in two terms, we think our La Mesa City Council can get it done in three."

Another member, Craig Maxwell, spoke about participating in a 1981 victory march when Art Madrid was first elected to the council. Madrid was elected mayor in 1990, and Maxwell ran against him last year.

Patrick Dean started his remarks by saying, "I've run for city council twice unsuccessfully." Dean, who ran in 2010 and 2012, spoke of term limits as "reducing the amount of democracy. I would be much more comfortable if there was a petition drive before public money is spent."

Madrid said term-limit campaigns were motivated by "personality" in National City, Chula Vista, and the state. "Nobody could beat Willie Brown in the [state] assembly. I challenge anyone to say the state is better now" with term limits.

Councilman Mark Arapostathis, who was elected in 2006, said, "I think the people need to decide; I think signatures need to be collected."

An initiative is scheduled for a public vote when a petition is signed by 10 percent of registered voters, Kennedy said in an October 24 interview. A minimum of 3306 signatures would be required as of that date.

While term limits have proved to be unwise in many cases, La Mesa might be one of those cities where they are sorely needed. So Art Madrid has been on the council or the mayor since 1981, huh? Seems as if I've been reading about him, his occasionally outrageous pronouncements, and his embarrassing behavior for a long, long time. Well it has been a long, long time, and it should have ended years ago. That the usual low-information voters of La Mesa keep reelecting him is no real affirmation of him or his ability to function as mayor.

La Mesa can and should do better. If it takes a three-term limit to get him out of there, so be it. Unfortunately, when term limits are enacted, they merely start the clock ticking on the existing officeholders, which means that Madrid could have three more full terms before being termed out.

A better solution for La Mesa would be to "vote the bum out" in the next election.