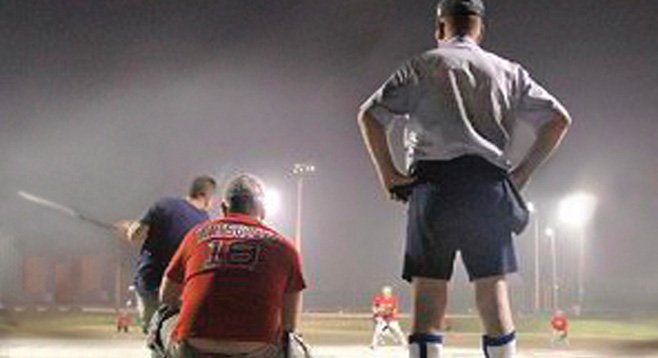 The best game of your life. The one time you played tennis-golf-baseball-football-basketball and everything you did was so over and above how you normally played the details of it remain fresh decades later.

For me, it was late August, 1983, in Fairbanks, Alaska. Late August is autumn, near freezing at night, mid-’60s in the afternoon, first snowfall less than a month away.

I was flying out to Atlanta and wanted to drop off $50 I owed Jerry Prins from the Roberto Duran/Davey Moore fight before I left. Prins was manager/shortstop for the league champion 8 Balls.

I’d known most of the men on the 8 Balls for 15 years or more. We found our way to Fairbanks during the late ’60s, early ’70s. We all lived outside of town, in cabins with no water, no electricity, no phones, none of that. It seemed like every three or four years there’d be a new thing and all the fellas would drift into it like a migrating flock. In the beginning it was building your own cabin. They all built cabins. Then it was playing in a string band. Then it was dog teams. And lately, to my astonishment, it was baseball. The same core group of six or seven guys formed a team and played in the Fairbanks adult softball league.

We were kind-of friends. We worked out of the same union hall. We’d go to the same parties, weddings, barbecues, but there was always a distance between us. The world was easy in those days, there were people who lived in Alaska and then there was everybody else. When meeting someone for the first time, Fairbanks residents required, within the first ten minutes, an answer to the only important question, “How long have you been in Alaska?”

I could pass the longevity test, but never could ace the loyalty test. I loved living in Alaska, but I also loved living in Baja, or Washington D.C., or Arden, Nevada. Loved, pretty much, any place I happened to be.

But I wasn’t thinking of that, I was thinking of Jerry’s $50 and girding myself for his new habit of chewing tobacco and speaking in a strange generic twang. I thought I’d watch the lads play an inning or two and then head to the airport.

I grab a beer out of the communal ice chest and settle in. Behind me, brakes squeal. A woman jumps out of a rusted Ford pickup, runs to the dugout. Todd appears and the couple fast-walk back to their truck. Jerry pops his head above the dugout’s roof, sees me, says, “Can you play right field for a couple innings?”

I think for a moment. Right field, where you put your weakest guy, someone who probably won’t put his hands on the ball. I can stand in right field for a couple innings. “Okay.”

Just then my team trots onto the diamond. How long has it been? Well, I played a lot of ball that summer before the eighth grade. Nothing organized, but a pick-up game almost every day. Was that the last time? In high school, gym class, we played in the spring. I’m running through the years when I hear a crack. Wake up to see that the batter has hit a long ball right at me. But, the ball’s going to be way over my head. I turn around, run five steps at full gallop, turn around again, put my glove up, and the ball lands dead center in its pocket.

There’s no way that should have happened. I had no idea where the ball would be. I never saw it after the first crack, but I’d run to the perfect spot, turned at the perfect moment, put my glove up at the perfect height, and, plop, made the catch. The ball found me.

At our next at-bat, Jerry hits a single. David grounds out to third. Carl hits a single. I’m up. Has it been 25 years since I’ve held a bat in my hands? I take two strikes looking and hit the third pitch over the second baseman’s head. Jerry scores.

And so it went. I had four at-bats, walked once, hit two singles, one double, plus one stumble-slide into second base. We won 12 to 7.

After the game there was a lot of, “Didn’t know you could play.” “You’ve got to sign up next year.” For that one moment I was beloved.

I knew this would never happen again. I said something about their fine, mighty fine team, and then walked off, into, by god, a golden sunset and caught my flight. It started perfect, was perfect all the way through, and ended perfect.

You don’t get many of those.

THIS is the stuff you should be writing. This. We have all had these moments and not any of us ever sailed a yacht or rode a horse in a polo tournament. You are an excellent writer, and while we all sort of marvel about the odd sporting event now and then, it's YOUR experiences that you write best. Hope you keep this in mind. Great stuff, Patrick.

Right field, where you put your weakest guy? That's where Cuban tyro Yasiel Puig plays for the LA Dodgers.