Thinking Flashes in the Sky (Part 4) 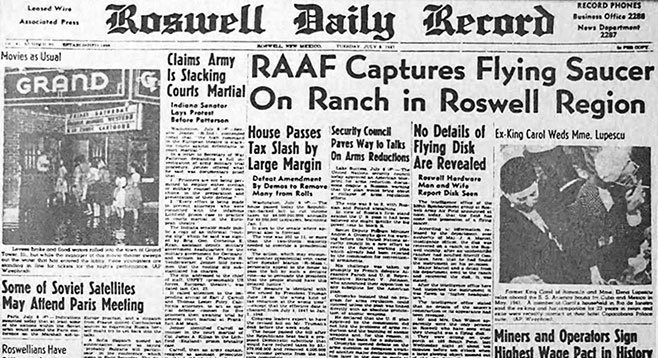 The Rise of Ridicule
On Tuesday, July 8, 1974, morning papers nationwide printed disclaimers. The San Diego Union ran a United Press wire-service announcement: “Official Washington was sure today that it knew what the flying saucers were not — but it had not the faintest idea what they were.”

“Privately, some…officers say what the saucers are not — and let it go at that. But officially, the A.A.F. said it is keeping an open mind, because the disks have been reported by so many normally responsible persons.”

One was Dr. C.J. Zohn, a guided-missile expert at the White Sands New Mexico Naval Research Lab. On June 29, he and two other scientists watched a faint glare in the sky grow into a “silvery disk.” It “whirled along” for 60 seconds and disappeared. “It didn’t go behind a mountain range. At one time it was clearly visible, and then it just wasn’t there.” Zohn told Army officials and “got nothing but knowing smiles.”

As a class project, H.P. Cotton, a physiology professor at Sydney University in Australia, had students go outside, stand perfectly still, and stare at a fixed point in the sky. “Within ten minutes, 22 returned,” he said. All claimed they saw flying saucers “and drew diagrams of the objects and their paths.”

They’d seen nothing of the sort, the professor chided. The shapes were “red corpuscles” bouncing across their retinas from the sun’s glare. “When you stand perfectly still, you will see rapidly moving, bright, oval-shaped objects. Now you can draw your own conclusions from reports from overseas.”

The San Diego Tribune-Sun put a negative spin on the Union’s morning account. The Army Air Force was “investigating the reported cloud-hopping disks with an open mind. But privately, high-ranking Army officers said they believed the saucers were a hoax and some persons were the victims of hysteria.”

Orville Wright, of Kitty Hawk fame, joined the list of naysayers. The “saucer craze” was a “government campaign to get us into another war,” this time with Russia, which many believed had built the mysterious objects. Wright objected to the “wide publicity” and said, “There is no scientific basis for the existence of the phenomenon supposedly seen by hundreds.”

Only late-edition newspapers from the Midwest to the West ran this story — among them the Los Angeles Herald-Express and the San Francisco Examiner, but not the San Diego Tribune-Sun. The historic announcement was part of a statement that Col. William Blanchard, commanding officer at Roswell Army Air Field, New Mexico, dictated to Lt. Walter Haut, the press-information officer.

“The many rumors regarding the flying disk became reality yesterday, when the intelligence office of the 509th Bomb Group of the Eighth Air Force, Roswell Army Field, was fortunate enough to gain possession of a disk through the cooperation of one of the local ranchers and the Sheriff’s Office of Chavez County. The flying object landed on a ranch near Roswell sometime last week. Not having phone facilities, the rancher stored the disk until such time as he was able to contact the Sheriff’s Office.”

The Daily Record continued: “Major J.A. Marcel, and a detail from his department, went to the ranch and recovered the disk…. After the intelligence officer here had inspected the instrument, it was flown to higher headquarters. No details of the saucer’s construction or its appearance had been revealed.”

Since Kenneth Arnold had seen nine silvery disks on June 25, over 3000 eyewitnesses had reported strange objects in the skies above the U.S. The objects differed in size and shape, but their movements were unlike anything seen before. And they flew as if deliberately controlled, as if “thinking.”

The Roswell headline validated these sightings. Radio stations across the country spread the news: The Army has a flying saucer!

Station KGFL in Roswell said that W.W. “Mac” Brazel and his son had found the “disk” on June 14, about seven or eight miles from the J.B. Foster Ranch, where Brazel worked as a foreman. The wreckage — bright, tinfoil-like sheets, rubber strips, and “a rather tough paper” — was spread across a large area.

On July 4, Brazel took his family back to the site. They tried to piece the debris together — to make a kite — but “simply could not reconstruct it at all.” They found no way “that it could fit.”

The family was struck by the lightness of the material. They saw no sign of an engine “or of any metal which might have been used for one,” or of propellers, “though at least one paper fin had been glued onto some of the tinfoil.

When he heard about the flying disks, Brazel wondered if that’s what lay sparkling on the desert floor. On Monday, July 7, he went to Roswell to sell some wool. On the way, he told Sheriff George Wilcox — “whispered kinda confidential-like” — about his find.

The Daily Record added that, on the previous Wednesday, during a fierce storm, Dan Wilmot and his wife had seen a “flying disk” — it looked like two inverted saucers 20 feet in diameter — shoot northwest over Roswell toward Corona, New Mexico. Calling Wilmot “one of the most respected and reliable citizens in town,” the Record said: “He kept the story to himself, hoping someone else would come out…but finally today decided that he would go ahead and tell about it.”

All night, between July 8 and 9, Sheriff Wilcox’s telephone rang nonstop, including three calls from the London Daily Mail.

Brigadier Gen. Roger M. Ramey, commander of the Eighth Air Force, made an announcement. The object, “which created a storm of speculation today…was a weather balloon and its kite.”

“The object was flown from Roswell to Fort Worth by the Air Force, where it was identified by Warrant Officer Irving Newton, of Medford, Wisconsin, of the Base Weather Station” as a white radar-tracking balloon. “Several of the balloons were released daily,” Ramey added, “according to changes in the weather.”

The Union story quoted Ivan R. Tannehill, the Weather Bureau’s chief forecaster, who disagreed. Since these balloons had been around for years, he said, it was unlikely that they would be mistaken “all over the country and all in one week for mysterious objects” flying at “supersonic speeds.”

But Ramey’s verdict was: case closed. The object was “definitely a United States Army device.” It was so “harmless,” he cancelled sending it to Wright Field in Ohio for further investigation. It was in his office “and’ll probably stay right there.”

That afternoon, every national newspaper published a warning. The Tribune-Sun’s headline is typical: “SEEIN’ SAUCERS EXPOSES YOUR PATHOLOGICAL RECEPTIVENESS.”

According to the United Press story, three scientists had expressed grave concern. “The hysteria stirred up over the ‘flying saucers’ could well mean that psychological casualties in an atomic or rocket war would far outnumber deaths from atomic bomb explosions.” The hysteria, they claimed, was a result of dropping atomic bombs on Hiroshima and Nagasaki in 1945: people now suffered from “war nerves.”

“The emotional state of many persons has been overactive since the first atomic bomb exploded,” said Dr. Edward Strecker, director of the Philadelphia Hospital for Mental and Nervous Diseases. Many of his patients suffered from “pathological repetitiveness,” swearing that the “bomb that wrecked Hiroshima made them impotent.”

A second scientist, unnamed, said, “It may not be necessary to drop atomic bombs on large cities. The urban areas might do just as well with psychological [hysteria], making a nation unable to defend itself.” Or even unable to go to work — a price paid for “thinking in the primitive state.”

The third scientist, an unnamed astronomer (most likely Donald Menzel), said that it was time for the nation and its “saucer screwballs” to “calm down.” These two words ran in almost every national headline.

Along with Dr. Strecker’s theory of mass hysteria, other sources explained why people saw strange things. Donald Menzel, the astronomer, said that every observation had a natural explanation. It was either a trick of light or a hallucination.

The most prevalent theory was something called the “Chosen One,” in which Providence selects an otherwise nondescript human “for a terribly important mission” (for example, Richard Dreyfuss in Close Encounters of the Third Kind). People who are “chosen” are privy to vastly important, secret knowledge, and therefore rise above their normal lot in life. They do so, of course, to seek publicity.

Another explanation was published nationwide: such sightings were “a convenient, subjective way to criticize modern life and release personal resentments.”

The post–Atomic Age had had enough of that attitude, the story affirmed, and enough of conspiracy theories, too. From now on, such nonsense deserved “the giggle factor.”

Army Air Force headquarters “delivered a blistering rebuke” to officers at the Roswell Air Base, wrote the Union, for mistaking a weather-observation balloon for something as lunatic as a flying saucer.

A contrite Mac Brazel confessed to reporters that he was so “sorry” about his “mistake”; if he ever found anything “short of a bomb,” he wouldn’t tell a soul.

Although the Union stuffed a solitary report deep in the second section (Bill Brown had spotted a round, silvery object, with a “Plexiglas observation bubble” over Palomar Mountain), the story claimed that local sightings had “dropped to a trickle” overnight. As they had nationwide. Within a week, reports of flying saucers nearly ceased.

After the Roswell debunking, writes Ted Bloecher, in the backlash that followed, “the kinds of stories that made headlines were…impossible to take seriously. If a report wasn’t an out-and-out hoax, it was an embarrassingly obvious mistake.” And “when cranks and practical jokers got into full swing, an aura of ridicule descended upon the subject that has lingered” ever since.

The original edition of that newspaper, very rare, shows alien communications devices, the interior of the spacecraft, and alien bodies. According to a friend who is an alien from space himself, the UFO hit a weather balloon. Unusual that same would make it crash. Over 150 space aliens, of several different species, live underneath SpaWars in Old Town and the Marine Corps Recruit Depot. We get all of our technology from the 149 species more intelligent than us. George Takei, Sulu of the original Star Trek series, has published on Facebook a number of photos of other planets and species. One alien who lives in Old Town, an Atlantean (pixie, fairy, leprechaun, little green man) is named Yahweh Gabriel Moroni, and has a site on Facebook. Ask him about the truth.

Here is one of the aliens currently being detained in Old Town San Diego, beneath the Marine Corps Recruit Depot and Space Wars Interplanetary Technology Research Center. I cannot give his name nor the photo origin. 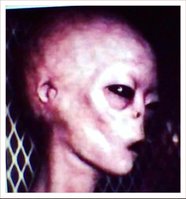 I posted a better photo at the bottom of Angels Page, www.NZ9F.com/Angels.

Metal birdies, but the only weather balloon was the one the UFO hit.

The Roswell film footage of the autopsies of the aliens found is at http://www.youtube.com/watch?v=FZouZJSG4ic, and be informed that all 8 Army Doctors were shot to death after they finished the autopsies, for knowing too much.