Strike up the bands 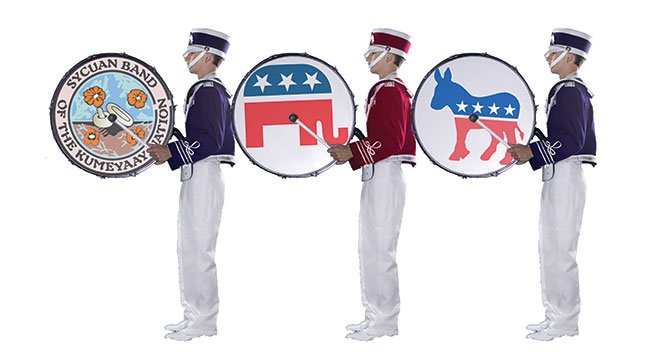 The Kumeyaay nation’s Sycuan Band of Native Americans, which runs an East County casino and golf course and owns two hotels in downtown San Diego, is spreading its money far and wide this strange special mayoral election season. Latest contribution: $50,000 to the county Democratic Party on October 11. The same day, Sycuan also handed out $50,000 to California Republican Party and $3000 to the San Diego GOP. Meanwhile, the California Republican Leadership Fund, which threw that big weekend fundraising bash over at Douglas Manchester’s Grand Del Mar resort a couple of weeks back, is out with a partial report on its take. Big donors included Bridgepoint Education ($12,500); Farmers Insurance Group ($50,000); Sempra Energy ($10,000); the Yocha Dehe Wintun Nation ($15,000); California Dental PAC ($50,000); and the Agua Caliente Band of Cahuilla Indians ($15,000). … Meanwhile, Bridgepoint has also kicked in with $25,000 for newly minted Democrat Nathan Fletcher’s mayoral cause. An independent expenditure committee calling itself “Restoring Trust in San Diego – A Committee to Support Nathan Fletcher for Mayor 2013,” also got a total of $20,000 from two unions representing plumbers and pipe installers. And, on yet another political front, there was Sempra Energy’s $15,000 to Diversity PAC, operated by Sacramento’s political band of Calderons, whose member Ron’s state senate offices were searched by the FBI this summer. According to a July report in the Sacramento Bee, the PAC “spent $82,941 between 2009 and 2012 at exclusive Bandon Dunes Golf Course on the Oregon coast. Ron spent another $5,880 at the Dunes through a legal defense fund he once set up.”