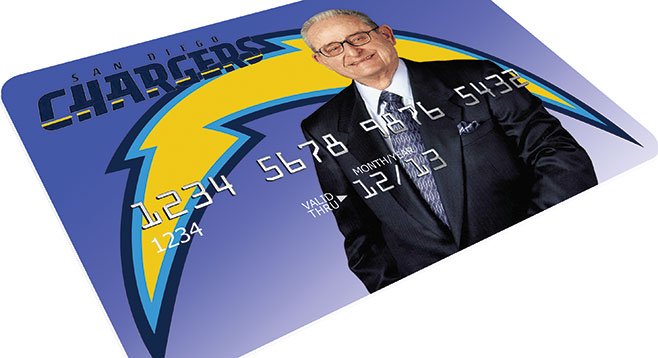 The Chargers may be off to a rocky start this football season, but the same can’t be said of the team-owning Spanos family’s political giving. According to a disclosure dated October 4, the A.G. Spanos Companies, “including Alex G. Spanos and affiliated entities,” gave $15,000 to the state Republican Party. That’s not as much as U-T San Diego publisher and real estate magnate Douglas Manchester’s $100,000, given last month, and another $50,000 he kicked in last Friday, but probably more than enough to get the family invited to at least a few GOP dinners and rounds of golf. Some, if not all, of the Republican state money is expected to eventually return to San Diego to be used on behalf of the party’s mayoral standard-bearer, city councilman Kevin Faulconer. Of late, Team Spanos has been trying to block plans by the city’s powers that be to run a convention-center game plan through the state Coastal Commission. The wealthy Stockton natives huddled with Democratic ex-state Sen. Steve Peace about a big play to replace the city’s current plan with one featuring a multi-use meeting area and stadium that just happens to accommodate the Chargers. But they lost that game last week. The Spanos clan has traditionally gone Republican, though their hired hand here, former Bill Clinton master of disaster Mark Fabiani, is backing Democratic frontrunner Bill de Blasio for mayor of New York. In June, Chargers chief Dean Spanos gave $2000 to the “victory fund” of North County GOP Congressman Darrell Issa. He also kicked in $5000 for the Gridiron PAC, the political action committee run by the National Football League to which all owners are required to contribute. Members of the Spanos family were big backers of GOP Texas governor Rick Perry’s bid for the presidency, but he bombed out early in the primary season and left the race.