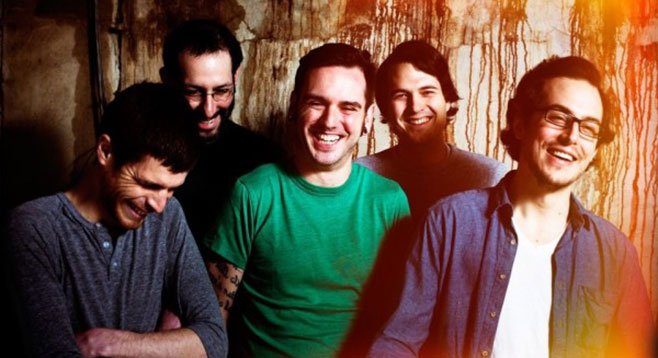 “Music for aging punks.” The Restorations, from Philadelphia, have been described in this manner by the music press, but I’m not buying into that. There are legions of 50- and 60-something punks still out there on the road touring in vans and crashing on fans’ sofas in order to make righteous punk noise for their 50- and 60-something fans. No, the Restorations are one of those wall o’ sound guitar bands that knows how to extract every ounce of emotion from the kinds of flag-waving anthems they seem to favor these days. That they have a vocalist who sings in the kind of voice you’d use to get someone’s attention, say, from across a really busy street, may confuse a listener.

The Restorations have been around for a decade — but mostly as Jena Berlin. Post name change, the Restorations came onto the public radar three years ago with the EP Strange Behavior. Singer Jon Loudon once explained the band’s songwriting focus to a reviewer by saying they focused on stories of boredom and repetition: “He says you know this place don’t sound quite right to me,” Loudon sings on “Strange Behavior.” “I snapped back, this sounds like everywhere right now.” The Restorations followed up with a full-length in 2011 (self-titled) and are touring now behind LP2.

More like a sound in search of clarification, the Restorations wander a path informed by indie, punk, and psychedelic rock. The rock press has run out of ways to describe them; some critics have resorted to the use of metaphors like “menacing storm.” In truth, this is a band in love with big rousing opens and echo, enough echo to make the drum solos, weird guitar solos, and feedback sound massive. You’ve heard this before. It’s Loudon’s hoarse, determined pipes that punch through the center and make the Restorations a purposeful effort.