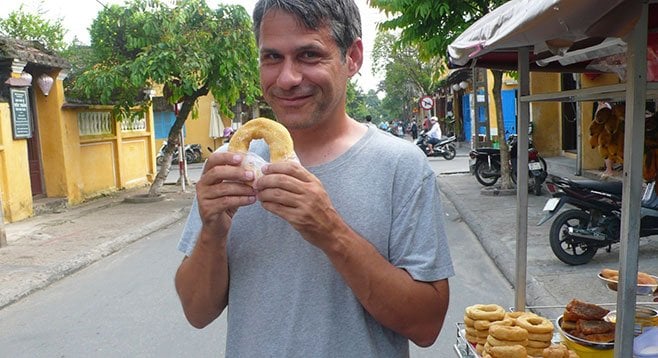 “I live in downtown L.A. now,” Mark Trombino says. “I’ve lived up here for a couple of years. Highland Park is where my donut shop is. We just opened two weeks ago.” Trombino says he quit music in order to go all-in on Donut Friend. “I’ve been working on it for the past two years, but I got the idea to open it five years ago.”

Why donuts? “I’ve made records my whole life. It was awesome and I loved it, but the work’s just not out there like it used to be. I either needed to give music one last big shot or...do something new.” Donuts won the argument. And not just any donut, he explains. “We don’t make them ahead of time. We assemble them in front of the customer.” The bread part — vegan, at that — is made in advance, but Trombino and his team add toppings and fillings on demand. It ends up being somewhat of a donut sandwich, he says, only with healthier ingredients.

“Business has been overwhelming. I thought it would take a while, but there have been lines out the door where people had to wait 45 minutes for a donut. That’s not what I intended at all. We’ll have to get faster.” The shop is open from 8 a.m. to 9 p.m. and employs 12 donut makers but he needs more. “We’re understaffed right now.”

One wonders how Trombino survived during the two years it took to make this dream into a reality. “To fund the shop, I sold my house and used the proceeds from the sale. Now, that money’s gone, and I have to dig into my 401k.” He says he still has some royalties coming in from his days as a drummer in Drive Like Jehu, an alt-rock San Diego band fronted by John Reis during the mid ’90s. Reis put the brakes on Jehu when his Rocket from the Crypt gig needed more attention. Post-Jehu, Trombino segued into a career as a producer/audio engineer, the highlights of which included recording work with blink-182 and Jimmy Eat World. One could argue that it made a lasting impression on the entrepreneur.

“You can get a Jimmy Eat Swirl donut at my shop,” Trombino says. Or a bacon-182, a Chocolate from the Crypt, or a Cream Syndicate, just to name a few. “A friend and I were bullshitting one night in a bar, and we came up with these ridiculous puns. I have more names than donuts.” The Rights of Sprinkle, for example. “But I’m not gonna do a Red Hot Chili Peppers donut. I hate that band, and this is my donut shop, right?”

Fun story... but technically he's frying like Jehu, not baking.