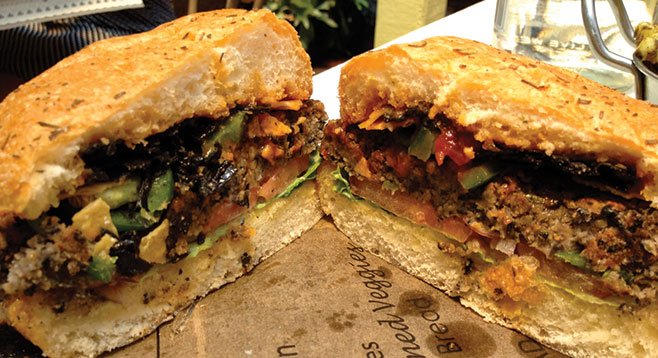 Three years ago, I left the East Coast, moved to San Diego, and immediately conducted a Google search for vegan restaurants. Failure. I could not find a master list of good vegan food (or even cobble one together). So I began a more traditional search — driving, walking, and eating my way through San Diego....

As it turns out, San Diego is fertile land for vegan cuisine. The trick is that many of the best plates are hidden on meaty menus, in unexpected places.

Queenstown Public House pairs its drinks with thoughtful dishes in a historic building restored with cutting-edge design. I started with a side of Fresh Corn Medley. The dish — white corn, red and green bell pepper, and yellow onion — exceeded my expectations. The corn had a vibrant color and sweet crunch. Does anything scream summer like fresh corn that is in season?

Next, I tried the TJ Burger, which features a house-made black-bean patty that is normally served with fresh jalapeño, corn, cilantro, hot sauce, and crumbled blue cheese on a toasted focaccia bun. However, Queenstown confirmed that the burger is vegan if ordered without the blue cheese. This black-bean burger is substantial in size and delivers a tantalizing combination of sweet and spicy flavors. Although the competition should be chronicled in a separate blog post, Queenstown just might have my new favorite vegan burger.

It turns out that Meatless Monday has a surprising history. During World War I, the United States was focused on feeding its soldiers and its European allies. The newly formed U.S. Food Administration declared that “food will win the war” and encouraged Americans to participate in “Meatless Mondays” and “Wheatless Wednesdays” so more food could be sent to Europe.

Every Monday, Stone Brewing’s servers hand out special meatless menus. All items are vegetarian and many are vegan or can be made vegan. Although the regular menu is also available, Stone Brewing Liberty Station estimated that 55% of the patrons order from the Meatless Monday menu!

I started by ordering the Housemade Kimchi.... This appetizer is spicy and tangy. It takes the edge off of hunger without ruining your appetite.

Next up was the BBQ Avocado Taco Trio. Fried avocado, Stone Levitation Ale BBQ Sauce , microgreens, and habanero-pineapple salsa are served on local Esperanza corn tortillas. Brown rice, black beans, and tomatillo salsa dress up the rest of the plate. Don’t forget to ask your server to skip the Asiago cheese to make this dish vegan!

Vegan Mexican food can be difficult to find. Especially downtown. Most Mexican restaurants rely on greasy meat and cheese for taste and flavor. Pokez proves that these fat bombs are unnecessary.

Pokez has a huge selection of vegan dishes, including tortas, tostadas, burritos, tacos, enchiladas, quesadillas, fajitas, salads, and breakfast options all day long. While perusing the voluminous menu, we munched on chips and salsa.

Before becoming vegan, enchiladas were my favorite Mexican dish. So I ordered the Mixed Vegetable Enchiladas, curious to see how this traditionally cheese-covered (or filled) dish could be made vegan. At Pokez, the answer is two flour tortillas rolled around mushrooms, bell peppers, and onions. The enchiladas were then smothered with a house-made vegan red sauce (made primarily from chilies, water, and flour). The dish did not disappoint. The vegetables were not too oily, and the vegan sauce was mild but added significant flavor to the dish.