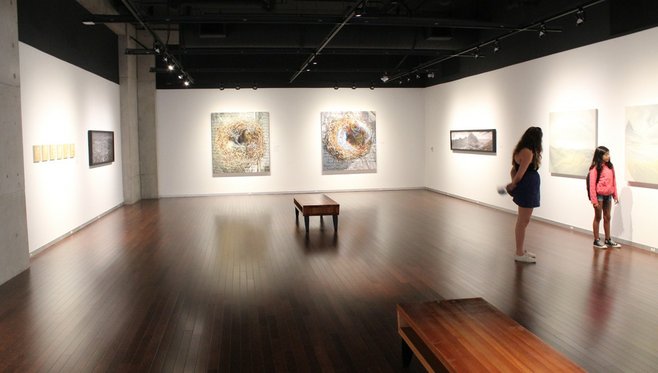 A few days after its opening, the San Diego Central Library’s board of commissioners met on the ninth floor of the new building on October 2. The monthly meeting, always open to the public, was the first to be held at the 330 Park Boulevard location.

Katie Sullivan reported that the San Diego Public Library Foundation turned over a fully paid off $196.7 million building to the City of San Diego on Saturday, September 28, and said another $10 million will be available for operating costs.

Director Deborah Barrow thanked the many contributors and noted that the library includes the Sullivan Family Baseball Research Center, an art gallery on the top floor, and art installations throughout the building.

Mental Health Systems (a locally established nonprofit) has a support center at the library to address issues of mental health and homelessness. Their services include crisis intervention, peer counseling, and mental health education.

Deputy library director Misty Jones said that from Saturday, September 28, to Monday, the 30th, 15,000 people came to the library and checked out 9000 books. New commemorative library cards were issued to 1100 people who hadn’t had cards before. Another several hundred library cards were renewed.

The city’s deputy director for engineering and capital projects reported on two of the 35 branch libraries that plan to erect new buildings. The Skyline Hills branch library project held its community meeting on September 11 and in three months’ time will have design concepts ready; the branch hopes to open a new building in December 2015.

The San Ysidro branch library is looking at the purchase of property on Beyer Boulevard. Once a site is found, the design phase will begin.

“The message to our branches is that 30 years in the making for the Central Library...hopefully not so long for some of our other libraries. We work every angle we can to move our branches forward as well. If it takes pulling a little bit of money here and there to get a project into position, that’s what we do.”

The new library also has an expanded name: “San Diego Central Library @ Joan ^ Irwin Jacobs Common,” in honor of the largest private donors, who gave a total of $30 million. The high-tech name uses @ as well as  ^, which is the mathematical sign for conjunction or adding.

The reading room is populated with people occupied by their laptops. Earplugs on. .

Took a tour yesterday. Fun space, if pricey. Very fine views, very fine. We the people paid over $100 million but I don't see "The People" plastered around...that's because we have more couth than others who shall here go unnamed.

The books hidden away in the old basement are up on shelves and cleaned...yes, I ran my finger over them to check. That in itself is wonderful. Could have done it for a fifth of the cost, with no private donors, unctuous ceremonies, back-patting, or plaques with the squires and the "interim" mayor, but all in all, very nice to have it done.

When I was there people were reading as well as just sitting and watching, taking pictures, and using computers. So, moving on. Horrible to contemplate that the enjoyable view will likely be marred by a new Chargers stadium. Rather see a brownfield myself. Maybe they will move to a more deserving city...does Portland have a team?

"We the people paid over $100 million" The entire monetary expenditure for the new library was donations: ZIP from we the people. The biggest donator was Irvin Jacobs who was accused today of having Nathan FLETCHER as a ‘No Show’ employee. By the way in your tour of the new library how many ‘No show’ jobs funded by Irvin Jacobs did you see?

Letter to the Editor

As a previous eleven-and-a-half-year resident of downtown San Diego I love to keep up with the changes and progress there.

First off, congratulations for the latest gem of Sun Diego, the new Central Library! No doubt it will be the highlight of many city tours.

Asked on behalf of my San Diego friends, Coby Taylor