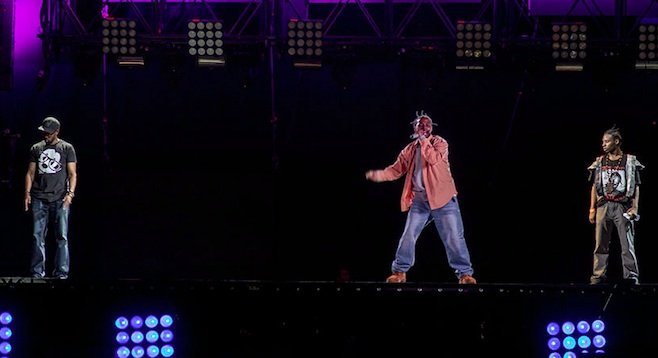 In September, Rock the Bells 2013 audiences were treated to appearances by Ol’ Dirty Bastard and Eazy-E, a feat of modern engineering, considering that the two rap stars have been dead for a collective 27 years. The gig marked what would have been Eazy-E’s 50th birthday. Like Tupac Shakur at Coachella in 2012, ODB and Eazy-E were holograms produced by San Diego company AV Concepts.

The Allied Gardens–based business was started in 1987 by Nick Smith and Fred Mandrick. They employ nearly 100 people to create the holograms, which is less exciting than the actual resurrection of dead rappers. Dr. Dre cooked up the holo-idea for Coachella, and he paid for it. Some estimates say the tab ran as high as $400,000 to bring back Tupac.

“It takes an ungodly amount of time to make a hologram,” Smith tells the Reader. “A three-minute piece can take a couple of months [of computer programming], including voice matching.” AV Concepts did not invent the technology that allows the deceased to rap from beyond the grave. “It’s actually an old idea. If you’ve ever been to the haunted mansion at Disneyland, it’s the same technique,” says Smith. The procedure, he says, is known in the trade as “Pepper’s Ghost,” named after John Henry Pepper, the London chemist who, in 1863, simplified a mirrored lighting technique that appeared to make ghosts float across theatrical stages.

“This is really just a large version of that,” says Smith. “We use a big reflective surface hidden down in the pit.” As for the technical problems that ground Rock the Bells to a halt for ten minutes, Smith says there was a computer crash on the audio side and, as such, not part of AV Concept’s operation. Once the sound was remedied, the ODB holo went on as scripted.

“We’re thinking it’d be fun to run some of the old Vegas shows,” Smith says when asked to name formerly living pop stars who might receive the holographic solution. “Elvis comes up a lot. Michael Jackson is probably the second-most-mentioned potential hologram. But Smith says it would help if people would participate in the making of their own eternal special effects. BB King, for example. “He’s 88. He loves performing. He loves being on the road. If we could film him now, we wouldn’t have to re-create him digitally. He could go on forever,” says Smith. “I was thinking about calling him.”