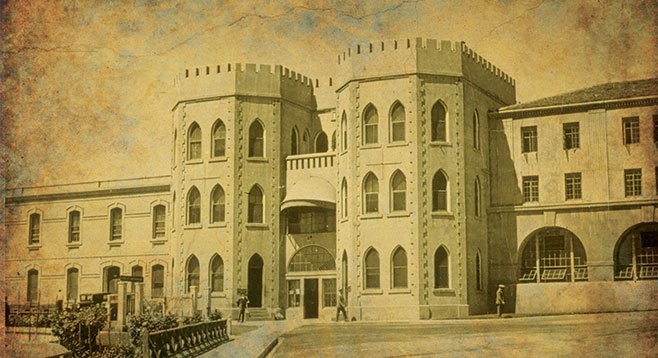 On the evening of October 16, 1892, John J. and Wilhelmina Geyser lay bludgeoned to death on their Otay Mesa farm. By the time deputy constable Thomas Smallcomb arrived, irate farmers erased the crime scene with bootprints.

Sixty-year-old José Gabriel lay hog-tied and beaten near the bodies. He begged Smallcomb for mercy. “I no stealee! I no stealee!” he mumbled in broken English. “I no kill them!”

Gabriel swore that Native Americans Pedro Armento and José Barrera had framed him.

Although there were at least 50 farms on Otay Mesa, they were so far apart that a person or persons could commit the crimes and disappear across the border, less than two miles away. Smallcomb arrested Armento and Barrera at Otay the next morning. Other suspects included the McCarthy family, whose large ranch stretched into Mexico. The McCarthys had recently been cleared of a smuggling charge and were furious at neighbors who testified against them. Shortly after the Geyser murders, the family left the area.

But even before the preliminary hearing began, newspapers and most San Diegans were certain Gabriel acted alone.

The trial, begun on Wednesday, November 30, was a repeat of the preliminary, with some differences: a jury of 12 “peers”; Gabriel had a new interpreter, Reginaldo Valenzuela; and Gabriel’s attorney, Melville Rawson, put him on the stand.

Gabriel’s haggard old face was scarred, and a headband still covered his silver-gray hair and wounds from the night of the murders. “Everything about him (culture, language, physical features, appearance, and personal habits),” writes Clare V. McKanna, Jr., “would be alien to this audience,” who saw him “as a dangerous outsider who had invaded their society.”

Unlike most trials at the time, the jury could interrupt testimony with questions. But neither they nor the attorneys asked why the murderer(s) needed two different clubs, why there was no blood on Gabriel’s feet, or even how Wilhelmina Geyser died.

The prosecution called Pedro Armento to the stand. He swore he knew “nothing” about the murders. Before he began cross-examination of José Barrera, defense attorney Rawson told the court that Barrera and Armento “had agreed to testify against Gabriel in exchange for having the murder charges dismissed against them.”

Rawson put Gabriel on the stand. Through the interpreter, Gabriel said Geyser “told me to go down there to work on Monday…to take away dirt from the cistern [he dug the week before].” Gabriel hadn’t eaten all day. He went to the house because he knew the Geysers would gladly give him supper.

“Rawson placed his client on the stand to show to the jury and audience that Gabriel was not the sort of person who could or would commit such a crime,” writes McKanna. Rawson even had Gabriel remove the bloody bandage and reveal the deep gashes and purple welts on his head.

Rawson brought in character witnesses. Patrick O’Neill, a saloonkeeper in Old Town, said he’d known Gabriel for at least 15 years and “never saw anything but peace and quietness; he never gave me any trouble.”

Rawson’s defense put doubts in some jurors. Around 1:15 a.m., the morning of December 5, unable to reach a verdict, they asked judge George Puterbaugh if they could separate a first-degree murder charge from the death penalty? Six of the twelve wanted life imprisonment. Could they stipulate the crime but not the punishment?

The judge replied: “If the verdict is silent in respect to the penalty, the court must sentence the defendant to death.”

The next day, J. L. Paulsen, the foreman, read a statement: “We the jury in the above entitled case find the defendant guilty of Murder in the first degree as charged in the Information.” Paulson named no penalty.

Hundreds of San Diegans refused to wait. After the population boom of the 1880s died, and the town shrunk from 40,000 to around 16,000, it acquired a national reputation for lawlessness. Brawls, clubbings, even gunfights were common. Many feared that the police shot without regard for bystanders.

A departing man told Herbert C. Hensley: “I would rather live in peace and security in the fitful climate of the East than to have a bullet accidentally lodged in my body when walking out to enjoy the balmy air of the Pacific in San Diego.”

On Friday, December 2, after continual harassment onboard the schooner Lou, George Neale (19) and William Silbery (17) had had enough: they cut the row-boat loose off the Coronado Islands, thus separating Captain Sam Smith from the source of his livelihood. That night Captain Smith slashed Neale several times with a hatchet and threw him overboard. Neale’s last words, Silbery recalled in court: “God, won’t you help me! I’m dying a horrible death!”

Smith later confessed: “I don’t know what made me do it. I must have been dazed… My God! I wish I had not done it.”

Smith and the infamous “Indian Joe” Gabriel were incarcerated at the same time. On the night of December 4, as jurors deliberated Gabriel’s fate, over 150 San Diegans armed with Winchester rifles gathered to storm the jail. According to the Union, “a considerable body of men and boys not belonging to the mob [congregated] about the jail, through curiosity to see whatever occurs.”

By 1:00 a.m., around the time the jury went home, police broke up the crowd of “grave and insidious men,” who vowed to return.

The next day’s Union editorial endorsed vigilantism and the “thrill of horror”: “While such demons in human flesh exist, the safety of the public demands their summary execution. If this is done without the formality of a trial…what matters it if the ends of justice have been cheaply accomplished?”

On December 6, another editorial asked: “What shall be done with these fiends in human form, who delight in the agony of their fellows? Ask any of the men you meet upon the streets of San Diego and the reply is the same.”

The 60-year-old Gabriel, locked in an adjoining cell, said nothing.

Neale’s father was George H. Neale, the court clerk for both trials. Unlike the Union, he pleaded for justice through due process.

For his safety, sheriff’s deputies took Smith by train to Los Angeles on October 6. After a long trial, beginning December 11, the jury declared Smith not guilty by reason of insanity. He returned to Diego in 1896 and lived many more years as a fisherman near the north county line.

Smith’s exit to Los Angeles may have mollified the mob, some. But on December 16, a huge crowd crammed into Department Three of the superior court to hear Judge Puterbaugh pronounce the sentence.

By this time at least four mobs had threatened his life: the night of the murder; on the road to Otay (near National City) for the preliminary; at the hearing; and the night of the vigilantes. Plus, neither he nor Smith could sleep in their cells, as hecklers screamed curses all night and gunshots punctuated their hatred.

In court, Gabriel still had his head wrapped in a cloth. “The murderer appeared more feeble and aged than ever before,” wrote the Union. “His face was deathly pale; he looked neither to the right or the left, but kept his gaze fastened on a law book lying in front of him.”

Defense attorney Rawson demanded a mistrial. The jury, he said, arrived at the verdict “by chance.”

Puterbaugh dismissed the plea. He read: “Whereas, Jose Gabriel, having been duly convicted in our Superior Court of the County of San Diego, of the crime of murder in the first degree, and Judgment having been pronounced against him, that he be hanged by the neck until he is dead in the State Prison of the State of California on the third day of March 1893.

On the document, Puterbaugh blacked out “punished by imprisonment” and wrote in longhand above it “hanged by the neck.”

The courtroom, writes the Union, became “as quiet as the grave. ‘Indian Joe’ was not excited, apparently, but, turning to the interpreter, said: ‘Tell him I want to be hanged in the day time, not at night.’”

“This was all he said, and the judge granted the request.” The bailiff then led him away.

On December 18, Gabriel and a sheriff’s deputy took the morning train to San Francisco. Officers of the prison met them at the depot and took Gabriel, in chains, to San Quentin, where he became prisoner #15173.

Built as California’s first state prison in 1852, San Quentin underwent expansion in 1892–’93, including the addition of a second-floor section called Stones Cell Block, designed for those awaiting the death penalty. This was new. Until 1891, executions were a local affair. Gabriel became the first occupant of the block later called Murderer’s Row and, later still, Death Row.

In San Diego many citizens became as angry as the mob that demanded a hanging. José Cota, the police officer, argued that the evidence was “circumstantial” at best, and that it wouldn’t take much “to prove that he did not commit the crime.”

The governor rejected Ubach’s plea and a second petition signed by over 50 San Diegans.

Gabriel seemed to understand the words, said the priests who administered the last rites. “He stood up during the reading and betrayed no emotion,” wrote a reporter for the Sacramento Bee.

Gabriel walked to the new scaffold — San Quentin’s first — and up the wooden steps. His executioner put a black cap over his head and adjusted the noose.

“Nothing about him indicated that he dreaded the near approach of death,” wrote the Sacramento Bee.

José Gabriel fell “six feet.” His neck snapped. And he became the first prisoner executed by the state of California.

“Gabriel refused to respond to questions as to whether he had any regrets” (Sacramento Bee), “and he maintained that he did not commit the murders.”

The next day, the San Diego Union wrote: “The execution yesterday of Indian Joe was a fitting sequel to the Otay tragedy.” But then, possibly thinking of Sam Smith set free and the vigilantism the paper incited, the editorial added: “it is a discreditable state of things that only poor men and friendless pay the penalty of their crimes.”

Equally discreditable: the first person executed by the state of California might have been an innocent man.