Ed sinks his fangs into some Indian food. 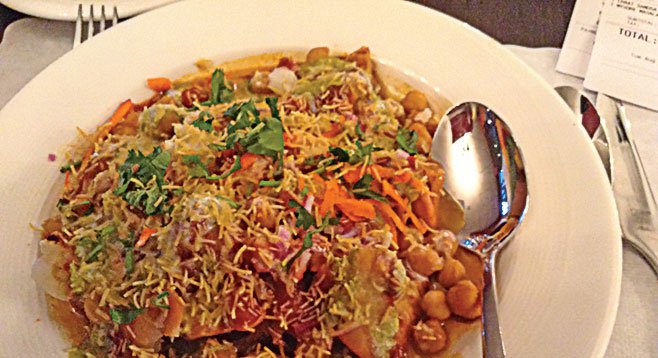 ‘These are the eight elements to a perfect meal,” says Kais. “Sweet, bitter, sour, salty, and umami; then smell, texture, and temperature. Your appreciation of taste and flavor evolves from the basic senses.”

Huh. Kais is explaining what the name of this Indian eatery means.

’Cause it doesn’t sound Indian, on the face of it. Sounds more like a lab class in sub-atomic quarks.

Fact is, I’m lost. Came looking for Indian food at Little India this evening. Missed my stop, finally pulled the cord two miles up at the Black Mountain Village complex where Black Mountain Road meets Mira Mesa Boulevard. “Village” was full of pizza this and burger that. 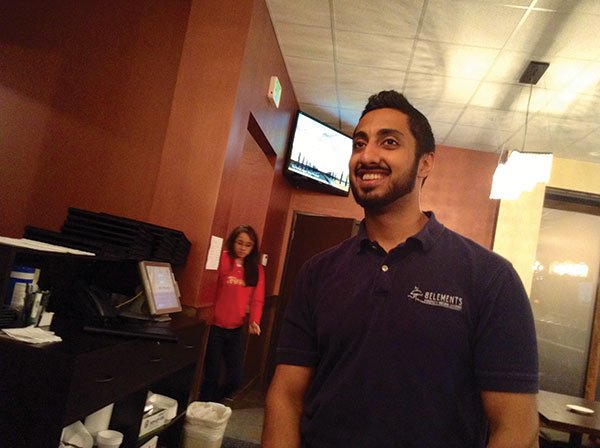 Kais explains that the restaurant is named after the “eight elements of a perfect meal.”

But the funny thing was, I was smelling Indian curry smells. Headed into the belly of the beast and there was this Namaste Plaza, an Indian supermarket. Its signs are tacked-up banners, so I’m guessing it has to be pretty new.

“They opened here because a large Indian community lives just behind here,” says this lady outside. She’s taking iPhotos of the full moon through the trees.

But this is a supermarket. No sit-down. And I want to sink my fangs into some good, hot Indian food. Here. Now.

So, I’m flailing about, wondering if I’ve gotta walk the country mile back to Little India when I notice this gal staring at a window. It’s got pages Scotch-taped to it. Huh. Menus.

“8Elements,” they say at the top. Ooh, yes. All the pages are full of eats like chaat samosa, pakoras, chicken sukka, chicken tikka, masala shrimps. Most of these are around $5–$10, although tandoori-oven dishes like the shrimp go to $15. 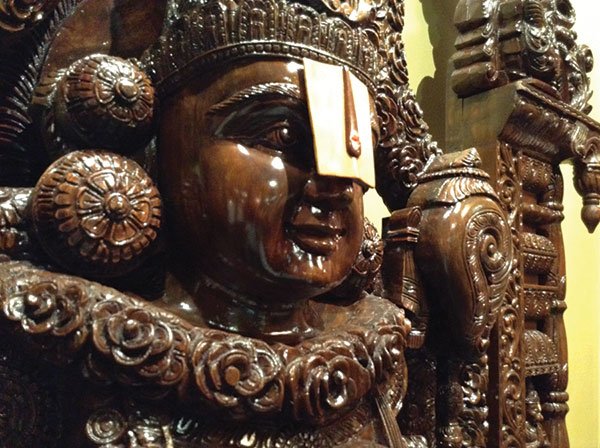 I thought it was King Ashoka, but it’s Vishnu, protector of the world.

Whatever. Got to try this. As soon as you get in, you’re in the presence of this massive wooden carving of a king, looks like, on his throne. Nobody at the welcome desk knows who it is, but I’m betting it’s King Ashoka. He was one enlightened dude. One of the guys Carla keeps ramming down my throat. Lived about 250 BC, was the original human-rights guy. They said he “regarded everyone amiably.” Also animal rights. He created laws to protect all animals, from parrots to bats to queen ants to “nanny goats, ewes and sows which are with young…”

So, this could be an interesting place. Food with principles?

I go and take a seat in a large dining room lit by chandeliers. Hmm... Solid heavy wooden chairs. Cream and terra cotta walls. You can see one side is used for a big buffet, from all the chafing tables they have. Guess that’s at lunch.

This is when Kais comes up. Name means “Hope.” His parents came from Afghanistan. Says this place is pretty new. Opened mid-year. Wanted to cook by the “eight elements.”

Must say, the elements that count most for me are umami (kinda savory flavor pleasure you get) and the sweet. And the combo can be great. So I tell Kais I was originally going to seek out my south Indian buddy Allen and have something like the dosas that are famous in places like Hyderabad.

“Well, we have all these dosas. The basic one is the sada dosa. It’s the thin crêpe made from rice and urad dal… lentil. That’s $6, with sambhar — the lentil stew — and chutneys.”

I love those big crispy things that taste and look a little like injera, the much thicker, juicier fermented bread of Ethiopia. These dosa, when they come, look like golden starched table napkins.

I end up taking #81, the Mysore masala dosa, a “spiced crêpe with potatoes smeared inside with spicy chutney.” Costs $7.

And I look at samosas, too. Love samosas, the little triangles of pastry stuffed with veggies or beef or whatever. Especially when they’re crispy and you have plenty of chutney to dip them into.

But again, Kais points out the chaat samosa ($6). “Curry with potatoes and peas inside chopped up and covered with curried garbanzo beans, yogurt mixed with red — sweet — and green — tart — chutneys, and onions, and grated cheese, and cilantro. I think you’ll like it.” 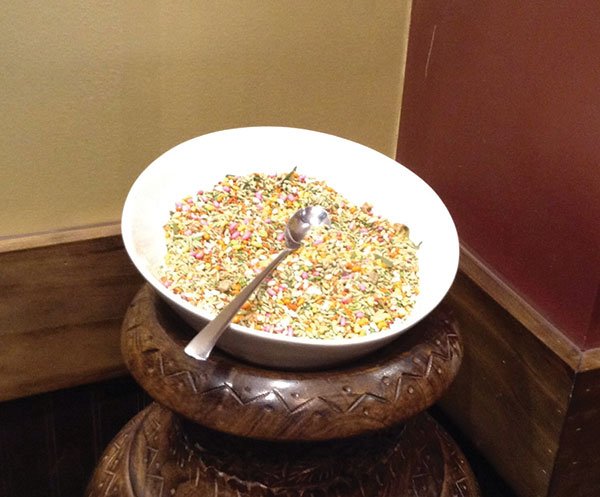 They have a bowl of little sweet chips you take to sweeten your mouth.

And, dang it, the man’s right. I mean, the dosa is good and comes with three chutneys as well as the little bowl of sambhar. The white chutney’s coconut, the red is a tomato-based, and the brown is peanut-based. So, dip city! Mix and match. Delish.

But, the chaat samosa beats everything else, hands down. It kills the competition, and with exactly that mysterious savory flavor quality helped by the sweet chutney tangs. Dee-delish.

At this point I could go for an Indian beer, like, an IPA — India Pale Ale, right? Or a Lion or a Windmill. But Kais says they haven’t gotten their license yet. So, no Indian cervezas.

Sigh. Probably just as well. Instead I get two orders of samosas to take home to Carla. It’s $4 for veggie-filled, $5 for the ones stuffed with chicken, two each per order.

Later, I get them back to the ranch and we pig out. We like the tart, dry herby chicken but love the veggie ones best by a mile.

But right now I come out beside the good King Ashoka. Except, turns out it’s not Ashoka, it’s Lord Vishnu. “The preserver of the world,” the new guy at the welcome desk tells me.

They have a bowl of little sweet chips you take to sweeten your mouth. Great idea. They have a flavor…oh, yes, fennel. Makes you think India straight off.

I’m crunching away when I come into the full moonlight. Can still hear the music. For a moment I feel lost. Somewhere in India, maybe?