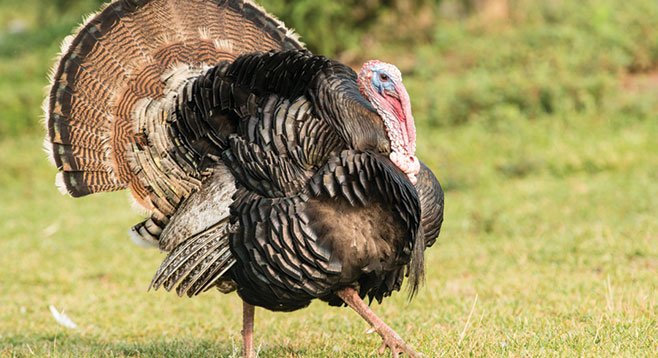 Found on Mrs. Lambert’s (Nauvoo-Colusa Middle School) Social Studies web page: “The first Thanksgiving was not a feast, but rather a time when Native Americans helped Pilgrims by bringing them food and helping them build off the land.”

According to the Commercial State Bank of Wausa, Nebraska, and one zillion other websites, 91 percent of Americans eat turkey on Thanksgiving Day. About 50 million turkeys will be slaughtered and consumed. Eating 50 million turkeys (say, 750 million pounds of turkey) in one day is like trying to imagine our known universe with its 200 billion galaxies, not forgetting that each galaxy contains 100 billion stars. What does that look like? Tell me.

And while we’re at it, the 91-percent-of-all-Americans-eating-turkey figure is probably a higher percentage than the percentage of Americans who would agree that Motherhood is a good thing. Think: turkey fetish.

On the happy side of the street, the night before Thanksgiving is the biggest night for bars in the USA. That’s right, Wednesday night will be bigger than New Year’s Eve, bigger than the Super Bowl, bigger than St. Patrick’s Day.

Makes sense when you think about it. Everybody has Thanksgiving Day off. The U.S. Department of Transportation’s Bureau of Transportation Statistics (they’re doing a heck of a job, Brownie) says the average American will travel 214 miles in order to make their mandatory Thanksgiving appearance. Once on site they’ll want to avoid family members until Thursday-afternoon check-in. What better place to hide than in a bar? Wednesday night, the night before Thanksgiving, is a drinking night.

Speaking on behalf of sports fans, Thanksgiving has gotten a lot better since the NFL Network went full season, providing us with football every Thursday night. And there can be no more special Thursday night than a Thanksgiving Thursday night. And what can be more special on that special Thursday than continuous NFL football from 9:30 in the morning until, at least, 8:30 in the evening? Okay, there is a bit of a dark cloud. On the West Coast, Thanksgiving dinner comes in the middle of the Steelers-Ravens game. Unfortunate timing — Pittsburgh is beginning to get interesting.

Sooner or later it’s about money.

Presidential turkeys are given cute names. Follows are names from 2002 through 2012. Katie and Zack. Stars and Stripes. Biscuit and Gravy. Marshmallow and Yam. Flyer and Fryer. May and Flower. Pecan and Pumpkin. Courage and Carolina. Apple and Cider. Liberty and Peace. Cobbler and Gobbler.

The president finds a TV camera and, tongue in cheek, pardons the turkey, who, we imagine, is whisked away to the lush pecking grounds abutting the Sunny Side Turkey Retirement Home. We smile. And then the nation seats itself at the communal dinner table and guts 50 million turkeys.

One more thing. As a kid, holidays were those times of year when my parents, my two brothers, and one sister had to confront the fact that we didn’t like each other. The insincerity was suffocating. I have always loathed Thanksgiving.

It’s an easy holiday to make fun of. I mean, come on, assembly-line turkeys are mutant aliens, bred to be so fat they can’t reproduce on their own. A hen will weigh 15 pounds after 14 weeks, a tom 35 pounds in 18 weeks. And don’t think about the drugs embedded into their organs, which will soon be embedded into ours. And yet we consume 50 million mutant alien turkeys in one day. Hypocrisy is the begetter of humor.

Through the most extraordinary series of unplanned events I found myself, at a late age, with a family. A child of mine, and two grandchildren, popped into my life four years ago and a couple years after that the family bought a house two miles from where I live. We see each other all the time. I am a constant and delighted babysitter.

And that, as they say, changes everything. But not really. You don’t shed a lifetime’s habit because things change. I attend Thanksgivings, Christmases, birthdays, Halloweens. And when I’m sitting with family at a holiday dinner, my heart still pounds, my throat constricts, I still feel suffocated, I still have an urge to flee.

I finally get it.

Incredible column, Patrick. I'm going out on a limb here and venturing that you always wanted to "be with them" -- even that birth-family that you hated so much. Good that you are able to say now how much you appreciate the child you fathered and the progeny. You never know when you might be hit by a truck.