To Zak, by John Lennon 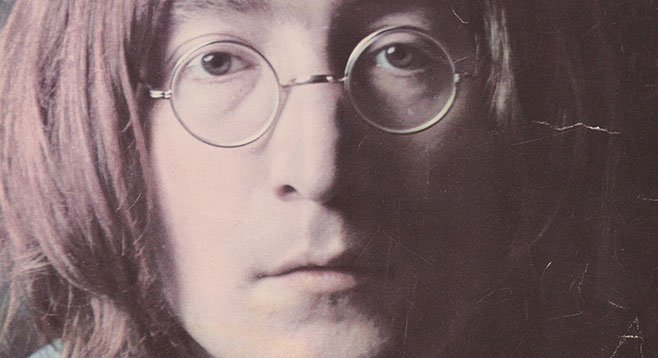 Secret Seven mainman Zach Goode was only ten years old when, 33 years ago this week, he asked his dad (a Greenwich Village autograph- and movie-memorabilia dealer) for advice on how to get John Lennon’s autograph. “He told me it was simple: take the eight by ten [Lennon photo] from the White Album, write a short fan letter, and send them along with a self-addressed stamped envelope to John at the Dakota. The address was common knowledge to any New Yorker. And every other psychopath, as we would soon find out.”

That mailer (“I wonder if any of these tweeting Facebookers have ever heard of SASE?”) was all but forgotten on December 8. “On the local news, they had announced that someone being described as Lennon had been shot.... I remember my dad walking into my room with tears in his eyes, and I just knew what had happened before he could open his mouth.

“A few days later, a manila envelope arrived at the door of our loft. When you’re ten years old, you don’t get much mail, so it’s a big deal if something has your name on it. This envelope looked so familiar to me, the way my last name was drawn with two eyeballs for the Os. Wait a minute, is that my handwriting? It can’t be...

“I opened the envelope and, sure enough, John had signed the picture, writing, ‘To Zak, by John Lennon 1980,’ with a smiley face. He signed it ‘John Lennon 1980’ for a second time on the back of the picture. Wow.” After relocating to San Diego, Goode cofounded Ghoulspoon and Divided by Zero. “I went as far away from my Beatles roots as possible, making funk, metal, rap, and reggae music.... I really thought my major innovation and contribution to music would be our blending of rock and rap.” After forming the Secret Seven, however, “I really felt I found my voice as a songwriter, coming full circle back to Beatles-esque songwriting.

“I now have the autograph displayed proudly in my home...just a few steps away is the Yellow Submarine–themed nursery my wife and I hand-painted for our newborn baby boy, Zane. How long before he outgrows the Beatles? Full circle, indeed.”

The Secret Seven will play in Hillcrest at the Merrow on December 13, while his other band Geezer (Weezer/Beastie Boys tribute) appears December 14 at 710 Beach Club in Pacific Beach.

Since the site template cropped the Lennon signature off Zach's photo, here's the uncropped scan he kindly provided -