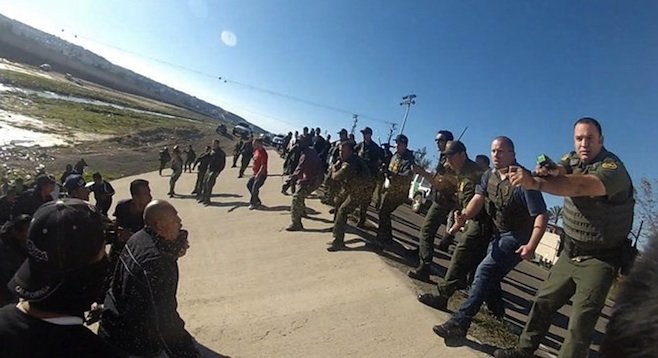 On Sunday, November 24, a group of over 100 migrants attempted to cross the border, walking toward it via the Tijuana River flood-control channel, coming face-to-face with Border Patrol officers.

They group called it part of the “Viva Villa” movement and claimed to be a revolutionary brigade. But with no organization and no plan of what they were actually going to do, the only thing they achieved was to put Border Patrol officers on the defense. The migrants never attempted to jump the fence but their progress was allegedly halted by pepperball guns, tasters, and pepper spray.

The group of people — including two couples who had brought their kids — walked up the steeply inclined concrete channel wall until they nearly came to the lip of the U.S. side, which is where they met resistance. The confrontation lasted for around 15 minutes.

When hope was lost and they realized their attempt was a failure, the group of migrants started shouting “¡Viva Villa!” and threw rocks and other debris toward officers; some were hit, but reportedly none required medical attention.

“La migra se comportó con precaución,” commented Ana Andrade, a student of journalism who covers the Bordo area. “They used the weapons and tools the government provides them to defend their country. There was smoke and we were all coughing. We ran away with teary eyes from the pain of the pepper spray as Border Patrol threatened to use more violence.”

There were several injured people and a few arrests by Tijuana's Policía Municipal, who picked up whomever they saw fit after the reports of the upheaval. Those who did not get arrested went back to their shelters alongside the river as soon as they heard the helicopters arrive.

Reputedly, the plan to advance on the border was organized the previous day outside Padre Chava's soup kitchen, a place where they feed the homeless and deportees.

There is no international fence there. It's yellow paint across the bottom of the Tijuana River channel that they crossed.