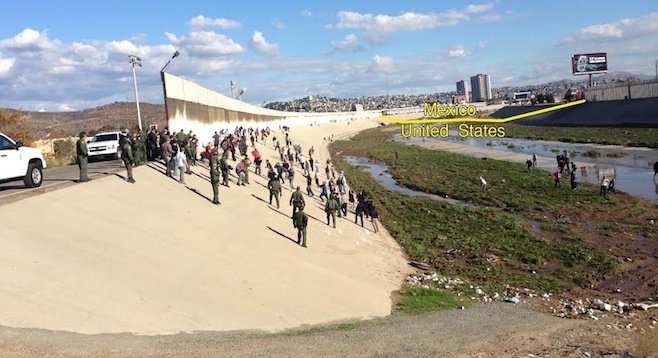 A lone U.S Border Patrol agent posted south of Camino de la Plaza near the shopping malls east of the San Ysidro port of entry Sunday found himself fending off a crowd of people running north from Mexico into the U.S.

The crowd, estimated at about 100 people, ignored the federal agent's order to turn back to Mexico, and he used his pepperball launcher to try and stop the group. Instead, the group began throwing rocks and trash at the agent and the situation escalated to a near riot.

Dozens of agents in vehicles and on ATVs responded to the agent's call for back-up and used batons and pepperballs to repel the crowd, comprised mainly of men.

The group was driven back to Mexico and no arrests were made, according to Border Patrol spokesman Jerry Conlin. San Diego sector chief Paul Beeson said he was relieved that none of his agents were badly injured.

“While attacks on Border Patrol agents are not uncommon, the agents showed great restraint when faced with the dangers of this unusually large group, and fortunately no one was seriously injured,” Beeson said.