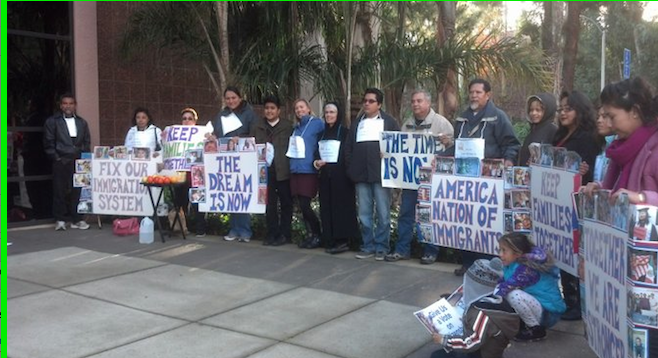 The 14 local participants said they were part of a nationwide show of support for Fast for Families, a group that just concluded a ten-day fast in Washington as part of an attempt to convince lawmakers to address immigration issues.

In breaking their 24-hour fast (which also kicked off in front of Issa's office with another small protest the day prior), the local group chose produce grown within the Issa's district, crops likely tended and harvested by immigrant workers, as a symbol of the need for immigration-law reform, explained Maribel Sollache.

"Our hunger is not just something that we can vanquish by taking food," said fast participant Carlos Ronquillo before taking a piece of fruit. "We're hungry for justice."

This week's events are not the first time Issa's office has been targeted over immigration issues. Organizers say they've repeatedly attempted to contact Issa directly but have been unable to get through his staff, who they claim have been non-responsive.

An open letter to the congressman was delivered on Thursday, inviting him to join the fast and asking for details on the immigration plan Issa claimed he would release in late October. As of yet, no drafts of the Issa bill have surfaced, though he has said it would lie "halfway between full amnesty and simply rejecting people."

A Senate bill on immigration reform passed with 68 votes in June; the House of Representatives has so far refused to consider the measure.

Immigration reform has become a trojan horse for amnesty for those who have come here and in some way have not followed the administrative procedures for their legal admittance or citizenship. The Immigration Reform and Control Act of 1986 was supposed to be a one time, fix all for a 'broken' immigration system that included amnesty for those here prior to 1982...and yet here we are again. Immigration reform without fixing the problem that leads to people coming to America who are 'undocumented' should be a non starter for any responsible and rational person.

Here is an interesting bit of history. In the late 30's, there were many Jewish people who immigrated from Germany to escape persecution, which later morphed into the Holocaust. At that time, there was a lottery set up to control the number of people who could enter the country. BUT, more importantly, in order to be admitted to the U.S., they had to have a sponsor who was financially responsible for them for a period of 5 years. Now, I am all for that system, so that the new arrivals don't become a burden to society in general (read taxpayers).

Finally, it's sad to see that a former and retired SDPD, Carlos Ronquillo, someone who swore to uphold the Constitution and the rule of law, has chosen to advocate for a group who collectively, in some form or other, chose to turn their backs on the laws already established to provide a pathway to be here legally. There are PLENTY of people who went through the legal process of becoming citizens...a pathway that already exists. It is a slap in the face of the millions who followed the system to advocate for a group of people who have chosen to not follow established processes.