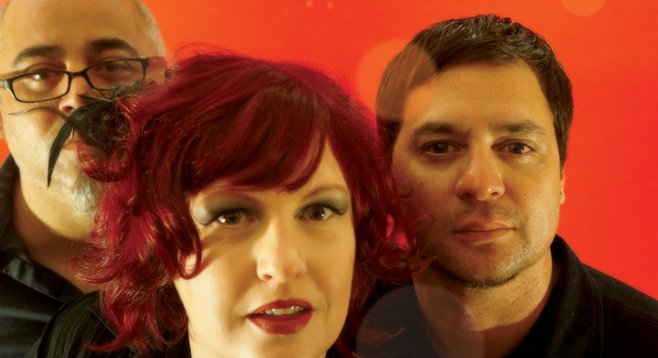 Prog-influenced electronic trio Hanging From the Rafters will play their debut album Box of Songs at the release party slated for Wednesday, November 27, at Tin Can Ale House in Bankers Hill. “All the songs on the album started with original ideas developed in the Roland Groovebox, which inspired the title,” says singer Lolly Brown, referencing an inexpensive retro-styled sequencer and integrated sound module popular with many techno and jungle-sound stylists. “Kawika — Kah-vee-ka, which is Hawaiian for ‘Dave’ — began experimenting with drum-and-bass grooves years ago while still playing in his former band, Red Light. He enlisted Michael [Brown, drummer] to explore the idea of adding live instruments over the Groovebox compositions he’d been crafting, and I added melodies and lyrics.” The all-local bill includes Tiger Milk Imports and Void Lake.

Jazz bassist Justin Grinnell, a vet of the Danny Green Quartet and ARC Trio, will debut his new full-length on December 1 at Dizzy’s in Pacific Beach, where he’ll perform with Josh Nelson on piano, Dan Schnelle on drums, and Robby Marshall on woodwinds.

“This is also our first show,” says Megan Liscomb of Boy King, whose new psych-pop band Soft Lions will play a release party for their debut EP No Peace on December 6 at Soda Bar in City Heights. “It will be mainly a digital release. However, if you attend one of our shows, you can get a copy of a limited-run ’zine we are printing to go with the EP containing artwork and lyrics from the band...the songs are intimate in perspective and vary in sound from sparse arrangements to heavy psych.” The group also features Jon Bonser (New Kinetics) and Marco Polo singer/keyboardist Lex Pratt (formerly of Wild Wild Wets).