How Qualcomm got a UCSD institute named after itself 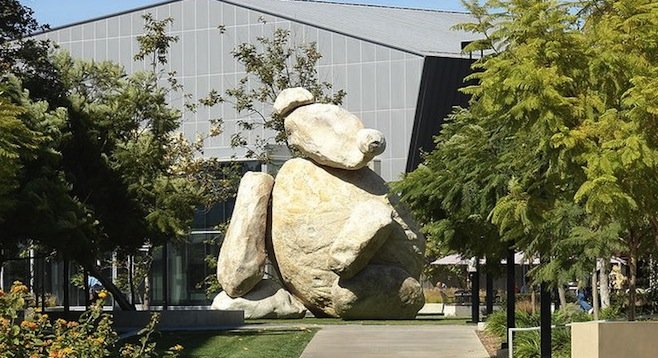 Millions of dollars of free publicity and good will have been garnered since cell-phone-chip-making giant Qualcomm, Inc., made the fortuitous 1997 move to pay the City of San Diego a mere $18 million for two decades' worth of naming rights for the former Jack Murphy Stadium in Mission Valley, along with the renaming a nearby street and freeway sign.

"Under the Agreement, the City granted Qualcomm the exclusive right to name the Stadium, agreed to change all identifying and directional signage at the Stadium and within the City limits to 'Qualcomm Stadium,' along with maps, brochures, advertising, and other promotional or informational documents, and to rename 'Stadium Way' to 'Qualcomm Way.'"

Then there was Qualcomm's inside 2011 deal with then-mayor Jerry Sanders, also worked out behind closed doors, to temporarily change the name of the Mission Valley pro-football venue to "Snapdragon Stadium," to promote a new line of Qualcomm's cell-phone chips.

Sanders's fellow Republican city attorney Jan Goldsmith said that the move was illegal, though no action was ever brought against the mayor, who had benefited greatly from the political largesse of Qualcomm founder Irwin Jacobs.

Records later unearthed by a public records act request showed that the mega-billion-dollar company had agreed to pay the city a "promotional fee" of just $1000 for the Snapdragon deal.

Two days after Goldsmith's memo cautioning that the name change promotion was illegal, Rachel Shira, executive assistant to Sanders, emailed Rodriguez and mayoral chief of staff Julie Dubick: "Per my email this morning, Mayor Sanders is on board, Thanks."

On December 16, came an email from Mary Lewis, the city's chief financial officer, raising questions about the value of the Snapdragon deal to the city. It was addressed to Alex Roth, Aimee Faucett, Natasha Collura, and city chief operating officer Jay Goldstone.

She had heard about the name change after it was announced to the press.

"ls the City being compensated for promoting a specific Qualcomm product?" Lewis wrote. "Is this above and beyond the original naming agreement? This kind of product exposure is worth a considerable amount of money and was this part of the negotiation?"

Qualcomm's latest renaming gambit came to fruition earlier this year at UCSD, when the school's previously named "California Institute for Telecommunications and Information Technology," or CalIT2 for short, was redesignated the "Qualcomm Institute for Telecommunications and Information Technology, the UC San Diego Division of CalIT2."

Because that's quite a mouthful even for academics and cell-phone engineers, the complex, paid for with a multimillion-dollar handout from state taxpayers, is now known informally as the Qualcomm Institute.

How CalIT2 came to be in the first place involves a separate tale of local political intrigue, as reported here in January 2004.

The idea...was reportedly cooked up in part by none other than Padres owner John Moores and Richard Lerner, head of La Jolla's Scripps Research Institute, along with Davis chief-of-staff and ex-San Diego Democratic congresswoman Lynn Schenk. As a result, insiders regarded UCSD’s bid as a sure bet and it ultimately received generous funding from the state treasury.

The university spent $57 million for the new headquarters building on the UCSD campus. Over the years since, hundreds of millions more have been spent by California and U.S. taxpayers on salaries, grants, and related expenses.

The push to rename the institute in Qualcomm's honor came in the spring of 2012, according to a series of emails released by UCSD after a request under the public records act.

"Frieder and Ramesh have advanced a request to rename these labs and programs the "Qualcomm Labs @ CalIT2 UC San Diego," wrote assistant vice chancellor for academic affairs Ann Briggs Addo in a May 5, 2012, email to higher-ups.

Ramesh Rao, the head of the institute, is also an engineering professor who occupies the university's "Qualcomm endowed chair in Telecommunications and Engineering Technology." Frieder Seible was then dean of UCSD's Jacobs School of Engineering, named after Irwin Jacobs.

His rationale is that Qualcomm's initial support of $15 [million] when CalIT was initially conceived and its donations of $8.5 [million] since makes Qualcomm deserving of the recognition.

I know there were other industry partners who helped on the development front though I'm sure Q is the big kahuna and my recollection is that the State supported this initiative rather significantly; otherwise I have no other information at this point.

I'm pleased to send along this message that I've approved the naming of the Qualcomm-supported Institute at CalIT2 as the Qualcomm Institute for Telecommunications and Information Technology, the UC San Diego Division of Calit2.

The Institute will be informally known as the "Qualcomm Institute."

I look forward to our ongoing efforts to express our sincere appreciation for your support of UC San Diego. We are most grateful.

All the best. Pradeep

Taxpayers, who shoulder the bulk of the institute's cost, didn't find out about the new name until April of this year, when the university dispatched a news release touting the move.

A reminder that the more things change, the more they remain the same.

The worn road of self-serving chicanery and sucking-up in this town is paved with the names of rich people like John Moores who got a big freebie from the public with his downtown ballpark and Irwin Jacobs et Fils who commandeered "Snapdragon Stadium" for a few key weeks with the help of always-amiable doormat Mayor Jerry Sanders, his dutiful assistant Julie Dubick and compliant City Attorney Jan Goldsmith.

Famille Jacobs continues to exercise its financial clout up at the University of California, recently getting a pretty changeling pol appointed to a "professor" job, providing funds and adding the parents' names to the on-campus La Jolla Playhouse (with reserved labeled parking spots out front) and now renaming a public UCSD institute after its own private enterprise Qualcomm.

We can thank always-behind-the-scenes Lynn Schenk, an early and open Filner-hater, whose own name continues to crop up as an enabler of less-than-noble expressions of private interest over the public good.

Yes, UCSD is for sale. ALL UC campuses are for sale to a greater or lesser extent. They have complained for years that state support is only a small part of their budgets, and that is the justification to beg money from every quarter. An egotist like Jacobs (along with his wife and sons) can get his name, or the name of his company on almost anything at a UC campus if he's willing to shell out enough. Jacobs has been putting his name on things there, and it seems as if he's been getting it done relatively cheaply. I doubt he'd get his choice of name on anything like that at UCLA or Berkeley for $23.5 million. Those campuses have fund raising campaigns with goals not in millions but in billions. And they hit those goals!

It should not be lost on the public, however, that when the state support was sharply trimmed during the state's recent (and continuing) financial stress, UC tuition shot up to a point where the UC is seen by many as no bargain at all.

Thinking about the availability and cost of a UC education, I heard an anecdote the other day about large numbers of UC undergraduate admissions going to full-tariff-paying Chinese and Indian foreign nationals while native-born California admittees enter into years of crippling debt to afford their educations.

At this point Governor Jerry Brown ought to be duty-bound to fill his numerous vacancies on the UC Board of Regents with "regular" appointees -- not the millionaire campaign-funders he has favored to date -- to bring some balance into Regents' decision-making on escalating tuition and executive compensation.

monaghan, the pattern of having millionaires on the UC Board of Regents goes way, way back, and has persisted in the intervening years. In the early 60's the board had rich oilman Edwin Pauley on the board, and "Mrs. Randolph Hearst" (yes, that's how she was named in official publications), among many others who were rich. I'd suppose most of them were appointed by Governor Brown. Oh, not THIS Brown, but his father. Just what sort of person would be a regular appointee?

"Just what sort of person would be a regular appointee?"

A guy who did one semester of Automotive Technology at Southwestern College.