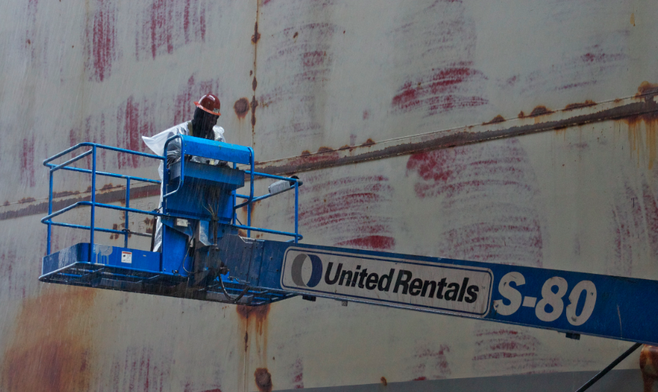 San Diego's shipping industry has waged an all-out assault on the newly adopted Community Plan Update for Barrio Logan. A handful of large shipping-related businesses such as General Dynamics (NASSCO), BAE Systems, Continental Maritime, and others — collectively known as the Port of San Diego Ship Repair Association — have directed $295,000 to the Protect Our Jobs Coalition, a political action committee intent on taking the approved community plan update to the ballot box.

They may have to navigate their way through the jury box before doing so.

Tuesday, November 12, attorneys for the Environmental Health Coalition filed a complaint against the association, claiming the paid petition drive they funded is sending a false message out to potential voters.

On September 17, the city council voted in favor of the update, thus creating a buffer zone intended on separating industrial and commercial business from residential neighborhoods.

In the following days, the political action committee embarked on an expensive and wide-ranging petition drive. Signature gatherers dropped anchor outside the front doors of big-box retail stores and grocery stores. They urged shoppers to sign the petition for a referendum on the Barrio Logan plan. They stated that without the signatures, the Navy and approximately 46,000 jobs would set sail for another port. (A point Voice of San Diego reporter Scott Lewis decried as false upon recently hearing a signature gatherer make the claim. See video.)

But the local environmental advocacy groups who have worked tirelessly over the years to address pollution issues in Barrio Logan say the ship industry has gone overboard with their allegations. At the crux of the lawsuit is the claim that the Navy was thinking about leaving town.

"[Environmental Health Coalition is] informed, believe, and thereon allege, in order to persuade or influence voters to sign the Referendary Petition, the circulators intentionally misrepresented and made false statements concerning the purport and effect of the petition. Petitioners are informed, believe, and thereon allege that at the time the circulators made these false statements and misrepresentations, they knew these statements were false," reads the complaint filed in San Diego Superior Court by attorney Marco Gonzalez.

But the lawsuit is more than just about the loss of potential jobs, according to the complaint. Attorneys for the coalition allege that if the ship industry is successful in defeating the plan update the city would be out millions of dollars and countless hours spent drafting the update. And, worse of all, residents living in Barrio Logan would get no relief from pollution and the health issues that go along with it.

"Petitioners believe, are informed, and thereon allege, children in Barrio Logan have 2.5 times the average San Diego County asthma hospitalization rate. The California Office of Environmental Health Hazards Assessment ranks Barrio Logan in the top five percent of the communities in California most disproportionately burdened by multiple sources of pollution, with higher vulnerabilities and burdens as compared to other areas of the state," adds the lawsuit.

The group is asking that the court prohibit the city from validating the signatures and placing the item on the ballot.

Recently a circulator was outside Albertsons in North Park. She likewise said the whole issue was about saving jobs for San Diegans. I refused to sign it, and told her it was about big corporations looking out for their economic interests--not their employees.

There are already railroad tracks and PCH, separating the yards from Shelltown. A wall would be a good idea, yard workers are tired of Shelltownians breaking into their cars.