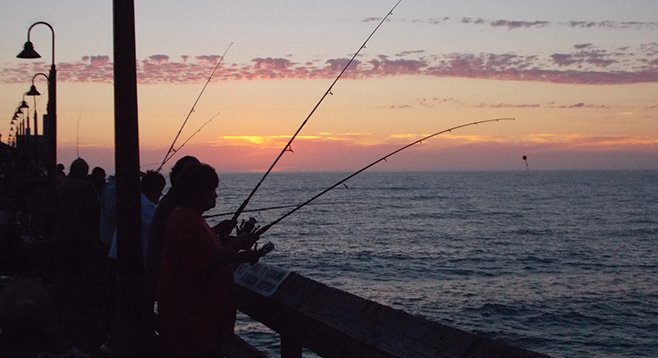 You meet famous people in the strangest of places. Like, this evening, I tramped out here to the end of this mile-long pier to maybe catch a green flash at sunset. It’s a clear sky. Except where the sun is sinking into horizon clouds. Then it really glowers through them, looking like a slo-mo nuclear explosion. Which, I guess, it is. Nobody else is interested. They’re all either fishing or watching armadas of pelicans ease overhead like hanging mobiles.

This is the Imperial Beach Pier. Crowded. Fishing is the thing. Everyone has a rod! Teens, grizzled oldies, kids, families. And they’re swinging them in. Sardines, mackerel, queenfish.

On the other hand, the chill salt breeze is sharpening my hunger pangs. Now I see the eatery here, the Tin Fish, is still open. And this late, around 8:30, it’s starting to look real cozy and warm. I head in.

First off, I have to ask Mark, the guy behind the counter, “How do you keep a business going out here, a mile offshore?” 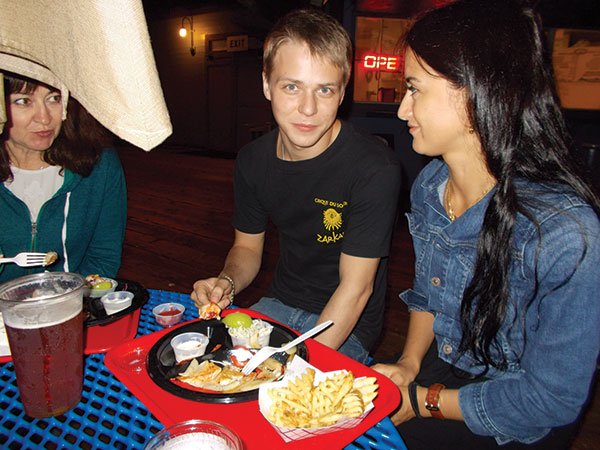 “Our fish-and-chips keeps us on the map!” the sign says.

I mean, what up? Here we are surrounded by a pretty good ocean of our own and fish flipping on the pier and we have to cross a continent to get ours? But I’m too hungry to start an argument.

Heck, think I’ll start off with a cup of Seven Seas. Not sure how much bread I’ve got in the pocket, so I have to ask the question:

“Uh, what’s the cheapest way to fill your belly here?”

Mark is fixing this guy Johnny one plate of onion rings and another of “crisscut” fries with cheese melted all over them. Think it’s about $11 worth. “Cheapest would be the fried-fish taco, $3.50,” he says. “Or the ‘Famous Tin Fish Sandwich’ for five bucks. Or the small fish-and-chips with three fish for $7. We won’t let you go away hungry.”

“This is a magical place,” says this lady who’s just marched up to the counter with two other women and a frail-looking guy. “I always bring out-of-town guests here because they have the best fish, bar none. In the world. I always have your grilled salmon tacos.” 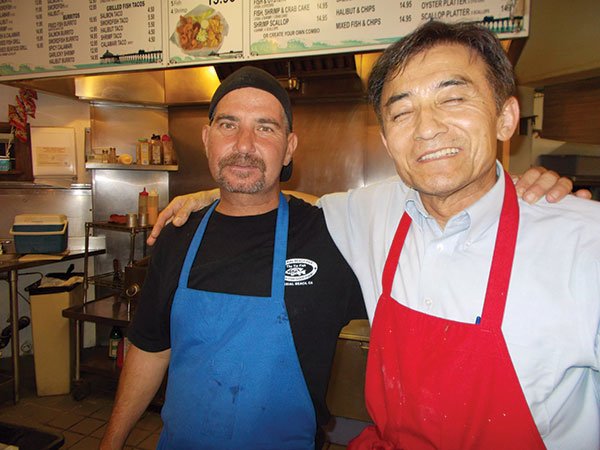 Mark the cook and Mike the manager

“We’ve just come from Vegas,” she tells him. “My friends are from Russia. Denis here is with Cirque du Soleil. ‘Zarkana.’ He’s the star on the flying trapeze. He does triple somersaults mid-air! I’m in charge of wardrobe.”

Oh, man. Ears are burning. But that’s when the other guy Mike — manager, turns out — calls my number. I grab my tray and head for the window counter. Love dipping the fries in the cocktail sauce and the tartar sauce. And the fish are fine. But, actually, the Seven Seas soup has about the most interesting taste. It’s got clams, shrimp, squid, crab, mussels, and three types of fish, Mark says. And with a pack of oyster crackers thrown in, it becomes the perfect mush.

It’s dark outside. But the lady, Sandy, has led the Russians to a table under a breezy umbrella. “I call this ‘the last place on Earth,’” she says. “Denis is getting cold. But I tell him, ‘Be thankful. Remember Russia.’”

“What do you think of our beers?” I ask.

“But where’s the vodka?” says Elena. “We have a saying: ‘A beer with no vodka is money wasted.’” She and her mom Svetlana laugh.

Denis eats on. Man. ’Course, he’ll sweat it all off flying through the air tomorrow night in Vegas. He shows me a Cirque promo video on his iPhone.

He flies. He really flies. So, how much does he weigh?

It’s past nine. Mark’s closing the big mesh gates that seal off this end of the pier. We start heading back for the mainland. Across the waters, America and Mexico shine their welcomes, like lands far away.

Next up: breakfast here. Their steak-and-eggs breakfast, man... Top sirloin, two eggs, toast, and pancakes or hash browns for $10.50.

Maybe I’ll just call Carla and sleep under the pier.

Been going to that pier since I was a teenager living in Otay Mesa. Fishing off of it and "back in the day", we used to jump off it to avoid the break in the mornings. The Tin Fish was added after the pier was renovated from being destroyed in the '80s. God, I love their criss crossed fries! They have come through in a pinch, many times. Breakfast IS better Ed. Should'a stayed.

Yes totally on the criss crossed fries. Lots of vinegar on them, of course. And wow, you're a better man than me, jumping from that height, with those whomping waves sweeping by. Now I've got to check that brekky. I'll let you know.