A world of cinema in our backyard 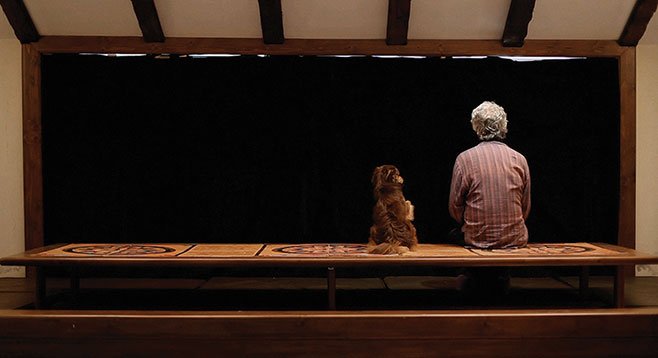 With 140 films to choose from — the program book is as thick as the city directory — spread out over ten days, a world of cinema (aka the 14th Annual San Diego Asian Film Festival) is about to land in our backyard.

In terms of smooth operation, down to the tiniest detail, and expertise in programming, every film festival in this town should take their cue on how to properly put on a show from the San Diego Latino Film Festival and SDAFF.

I’ll praise festival programmer Glenn Heath’s work when SDLFF rolls into town next year. For now, the gratitude goes to SDAFF artistic director Brian Hu, whose passion and vision spread out over the past few years have helped to elevate an already lofty gathering to the point where few Asian film festivals in the United States can rival it.

I’ve had a chance to preview 10 of the festival’s 140 offerings and there wasn’t a bad one in the bunch. Then again, Brian knows my tastes and screens the screeners before sending them my way.

The festival runs November 7–16, with the majority of the screening taking place at Digiplex Mission Valley. For other locations, titles, ticket prices, etc., visit festival.sdaff.org/2013/.

Put the following five films at the top of your must-see list.

Closed Curtain arrives with more than its share of baggage. Be advised that it will prove most beneficial to spend a few moments reading up on the filmmaker’s plight before watching his movie. The Iranian government has placed master director Jafar Panahi under house arrest for six years, with an additional 20-year ban on participating in any part of the filmmaking process, on the grounds that he freely pursued artistic expression. Panahi brilliantly lays the groundwork for Curtain’s first half with a three-minute opening long take reminiscent of a similar establishing shot from his Crimson Gold. Kambuzia Partovi, the film’s co-director, stars as a writer who, along with his dog Boy, practices his craft at Panahi’s villa while the director is out of town. Amid a mirrored crazy-quilt of framed posters from movies past, Panahi suddenly and unexpectedly appears halfway through the film. His arrival is the most dazzling in-camera special effect of the year. With it comes a noticeable shift in tone, as everything that follows plays like jagged swatches of a surreal fever dream. This is the second film Panahi has produced while in exile, and what he achieves with a cell phone and consumer-grade video equipment puts the geek squad at ILM to shame. Screens at the Digital Gym on November 11 at 6:30 p.m. and Digiplex Mission Valley on November 12 at 8:35 p.m.

Cat Stevens’s preeminent male weepie “Father and Son” sets a paradoxical tone for this drama about Nazanin (Nazanin Bayati), a demure, dead-center Iranian student working her way through med school as a tutor. Unable to secure housing on campus, Nazanin agrees to share a flat with Sahar (Pegah Ahangarani), the first perfume-counter clerk she happens across. Payment for her extracurricular coaching is frequently deferred, and Nazanin finds the cultural façade of sexual discrimination and regulatory wrongdoing rapidly closing in on her. The moral obligation she must accept when Sahar suddenly flips out obliges Nazanin to pay her roommate’s debt to society. It also accelerates the pace, leaving an ace thriller in its wake. Screens at Digiplex Mission Valley on November 9 at 2:30 p.m. and again on November 10 at 12:35 p.m.

A letter from his younger, globe-trotting sister revels in “the familiarity of the unknown” while all detached Kenji (Tsubasa Funasaki) wants is to keep the family home that his father is selling out from under the 30-year-old. The realty company seems in no hurry to unload the property, so Kenji removes the bucket from the head of the plaster dalmatian lawn ornament (with optional cloth bandana tied at the neck), takes down the For Sale sign, and decides to squat. Armed with chalk, water balloons, and squirt guns, a trio of neighborhood rascals decide to make Kenji and his home base their target and ultimately form an allegiance with their victim. Unlike American films, in which slovenly man-boys stupidly celebrate their refusal to grow up, Homesick gently unspools a sweet eulogy to the last gasps of Kenji’s fleeting childhood. Screens at Digiplex Mission Valley on November 10 at 12:10 p.m. and again on November 13 at 6:00 p.m.

What happens when anyone with a phone can direct? If Jafar Panahi can do no wrong shooting on an iPhone, artist and self-proclaimed “fucking genius” Jimmy (Matthew Gallo) doesn’t know which end of the device to look through. At best, his work can be labeled improv erotica; to connoisseurs of sleaze, it barely qualifies as CFCM balloon-fetish porn. A fatuous cineaste (check out some of the titles on his video shelf) and even more narcissistic lover, Jimmy keeps Joeun (Jiyoung Lee) his girlfriend of five years on the “payroll” as go-fer and prop mistress, designing lighted techno-bras for his idiotic sexploitation epic. She gradually falls in love with the film’s leading man (Max Fisher) over morning smoothies and intense exchanges on the topic of regularity. Alas, Helen Keller in another multiplex can see that he’s gay. Lee is hilarious in the role of outcast, the one character who sees everything and says nothing. And a quick aside about a Reese’s Peanut Butter Cup death kiss had me laughing so hard that I woke the neighbors. A great way to spend 78 minutes. Screens at Digiplex Mission Valley on November 10 at 7:30 p.m.

One more cop film depicting a pair of detectives — one married, the other single — seated in a squad car lamenting their shitty home lives and lousy pensions and my head will crack in two. There’s not an extraneous moment of character-driven padding in Johnnie To’s Drug War, a see-the-job, do-the-job policier detailing the exploits of two birdbrain addicts piloting a truck filled with meth through the streets of Tianjin, China, and the police force assigned to bring them in. The acting, particularly Hao Ping (as “Ha! Ha!”), riffing on Joe Pesci’s Goodfella Tommy DeVito, is uniformly first-rate, and Cheng Siu-keung’s streamlined cinematography demands the big-screen treatment. In spite of having received a two-week engagement at AMC Mission Valley — backed by a four-star review in these pages — Hu thought it wise to give cinephiles who missed it (and guys like me who have seen it six times) one last shot. Screens at Digiplex Mission Valley on November 9 at 3:45 p.m. and again on November 11 at 9 p.m.