Where beer is liver

Ed gets some goat and the requisite banana in Little Mogadishu’s Fatuma Restaurant. 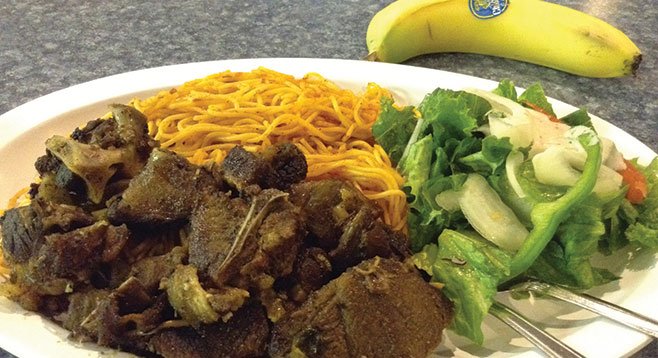 The king sits across from me.

“I hope to unite all of Somalia under the House of Tunni.”

I hold on lifting the goat to my mouth.

This is Dr. Ali Ridwan. Seems that back in Baraawe, a town on the coast of Somalia, he is the chosen heir of kings who have ruled southern Somalia for 1000 years. And his dad the present king is — he swears — 110 years old. 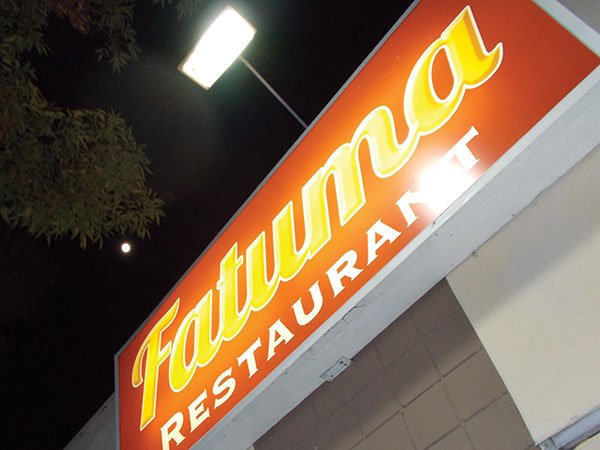 The doctor is telling me all this as I chomp into a pile of goat meat and spaghetti and chopped-up banana. He may be the next king, but right now he’s the manager at Fatuma, a Somali eatery up here in Little Mogadishu, as folks call this neighborhood centered on University and 50th.

It’s a new-looking place. A checkerboard of red and cream linoleum tiles covers the floor, buttery cream and maroon walls line the place till you come to the four white arches of a suddenly romantic room divider with white curtains and lanterns.

Two groups of guys are chowing at tables on the side and booths at the back. The counter’s on the right, all bright tile work with glass-protected chafing dishes up front, and a rack of dish-illustration pictures above the server hatch from the kitchen.

Hmm... When I came in ten minutes ago, saw typical “Mediterranean” choices. Gyros, kebabs, Greek salads, shrimp salads, lamb plate, most hovering around the $10 mark. Also breakfast items: beef suqar, “beer,” ukun, all with anjero and all $5.49. Plus a sambusa plate for $5.99.

Guy behind the counter says suqar is ground beef, “beer” is liver, and ukun is eggs.

“But these are only in the morning,” he says.

Oh, right. And the anjero must be like injera, the big, juicy discs of fermented bread the Ethiopians love.

Plus, memories came flooding back of, well, camel. I ate it at a little Somali place where all the Somali taxi drivers seem to gather, Coffee Time Daily. It’s just a few doors further along University. The camel meat there, mixed with beef, was called odkac. Taste was smoky; like beef, but more gamey. 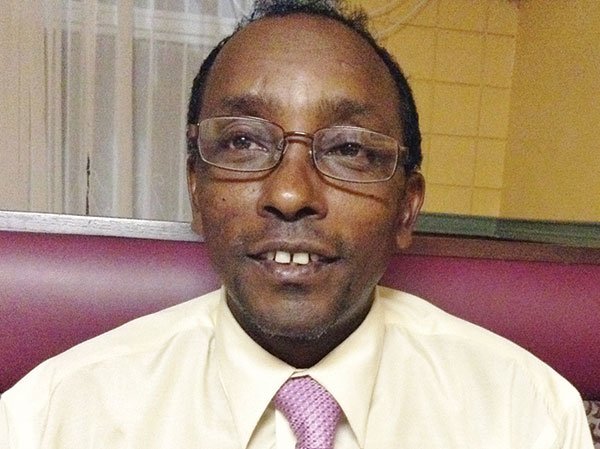 Ali Ridwan claims to be heir to the kingship of Somalia.

I remember this guy Abdi telling me Somalis love their camels so much they have 46 different words to describe them and endless poems singing their praises. Abdi’s friend Ali told me he knew people back home who had never drunk water in their lives. They had always drunk camel’s milk and eaten camel meat.

So, as soon as I came in here to Fatuma, I had to ask the guy behind the counter. “Do you have camel?”

He shakes his head. “But we have goat. It’s a little bit the same,” he says. He points to one of “Fatuma’s Specials,” a wasla plate. Turns out wasla is goat. It comes with basmati rice or spaghetti, plus salad and, this being Somali cooking, a banana. All for $9.99.

I look over the other $9.99 plates: lamb, chicken steak, tilapia, chicken kebab, gyros. They even have pizzas. The veggie is $7.75, and the halal pepperoni pizza (halal meaning the animal that became the pepperoni was humanely slaughtered, according to Islamic rules) is $7.99. And that’s with onions, green peppers, black olives, pineapple, tomato, jalapeño, as well as the pepperoni.

I almost go for it, but no. Got to try the goat. No kidding, heh-heh.

It’s when my plate arrives and I’m about to tuck in that this smart-looking Somali gent in a lilac-colored tie comes to see if everything’s okay. Turns out he’s the manager. Turns out he’s Dr. Ali Ridwan, king in waiting.

“Please, eat. Goat is very good for you,” he says. He explains the spaghetti: “We have adopted it since the Italians came and colonized part of our country.”

But what about the banana? Every Somali place I’ve been at you see guys peeling, chopping, squeezing banana pieces over rice, spaghettis, fava beans, soups, whatever. One comes with every Somali meal. So, what’s the deal?

“We have the sweetest bananas in the world growing in Somalia,” says Dr. Ridwan. “We Somalis have a sweet tooth. Even though your bananas aren’t so sweet. Just as you have french fries, we always have bananas.”

Actually, I like the idea. I chop mine up and spread it over the spaghettis and goat and salad. And turns out it’s a nice counter to the gaminess of the goat.

Dr. Ridwan says his favorite, and the dish you would always serve a guest you respected, is soor. I see the item on the menu: “Soor with sukuma.” It’s a Somali maize with mixed vegetables. Costs $6.99.

“I love it with camel milk,” he says. “Together they’re sweet and very healthy. And I love camel meat. Better than other meats. More energy, healthy.”

I have to ask. “What about returning to Somalia to become king, if your dad is 110?”

“Al Shabaab, the group fighting the government over there, they would not welcome me back,” he says. “If I go, they kill me. My dad says, ‘You have to stay where you are.’ He said he will give a signal when it’s okay. My plan is to return and unite all of Somalia, to rule all of Somalia. And have democracy, too. But the time has to be right.”

Wow. I want to go on talking. But suddenly it’s ten o’clock. Place is closing. I pack the rest of the meal and head home. Head’s buzzing.