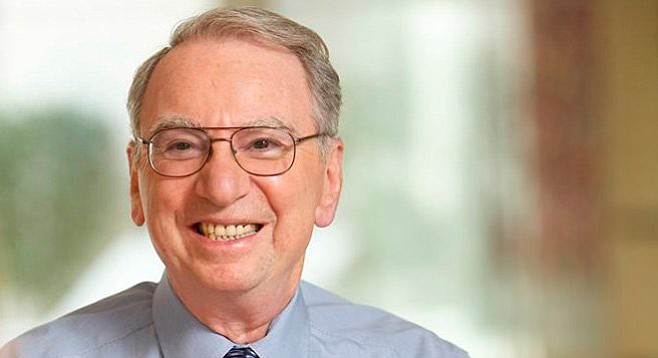 After the fall of Bob Filner, the San Diego mayor forced from office after a sex-harassment scandal, the biggest winner in the city's latest brush with infamy seemed to be ex-GOP assemblyman Nathan Fletcher.

Although he had come in third against Carl DeMaio and Filner in last year's race for mayor, the former Republican turned independent turned Democrat appeared to have picked up enough name recognition and political momentum from that contest to sail into this month's Filner replacement election with a sizable edge.

Yesterday, the U-T unveiled its latest poll, conducted with TV station KGTV, showing that Faulconer had jumped into first place, with 41 percent versus Fletcher’s 28 percent. City councilman David Alvarez was third with 17 percent.

Some observers attribute the dramatic swing to some sharp campaigning by both Manchester and other wealthy local Republicans, assisted by big money from state and national GOP funding sources. In addition, an apparent reluctance by the Jacobs forces to engage their foes directly, relying instead on proxy media and donations from others, may also be playing a role.

Earlier this year, about the time Filner's problems were beginning, Manchester struck up a partnership with Virginia's Franklin Center for Government and Public Integrity, which, according to a report in the Columbia Journalism Review, is allied with and financed by Charles and David Koch, the conservative oil billionaires based in Wichita, Kansas.

Several former editorial and investigative employees of Koch-linked entities now work for Manchester's U-T. Last week the paper ran a story revealing that of the major candidates for mayor, only Fletcher had declined to release his academic transcripts.

The Voice of San Diego, an online news and opinion operation heavily funded by Jacobs, pooh-poohed the U-T story and the value in general of any candidate releasing college records. One Voice item was headlined, "This Week in the Mayor’s Race: We Knew Too Much."

The U-T followed up with revelations, first reported here last year, regarding Fletcher's repeated conflations of his father and stepfather, including a recent statement by the candidate that he was the first one in his family to attend college, although records show otherwise.

But if Fletcher ultimately falls, the coup de grâce may come to be seen as the volley of hit pieces launched against him and his Qualcomm benefactors by the GOP Lincoln Club, a small circle of well-heeled developers and other special interests, including Manchester and Predator drone-maker Linden Blue, who along with brother Neil runs General Atomics.

The club's very first piece, dispatched the first week of October, directly attacked Qualcomm, implying the cell-phone giant had given Fletcher a cushy job for getting the company a tax break while he was in the legislature.

Qualcomm CEO Paul Jacobs, son of Irwin Jacobs, posted a letter online saying he was "outraged" by the mailer and demanded from the Lincoln Club "a full apology and retraction of this slanderous attack on our company and its more than 13,000 local employees," which has not been forthcoming.

Since then, Jacobs has fallen quiet, and the anticipated seven-figure Fletcher donations from the Jacobs ranks have yet to materialize. Some political observers say that has only emboldened the Lincoln Club, which tends to be a macho-oriented politically combative builders' bunch, not the symphony set and high-tech engineers Jacobs is used to dealing with.

Personally, I think this is a hilarious outline of the snarl that is San Diego's special-interest-dominated politics that routinely crosses traditional Party lines.

Everybody but everybody gets together to kill off rambunctious liberal former Mayor Bob Filner in less than a year's time, but after Filner's fall they are at each others' throats over who will best serve their own special interests from City Hall -- macho builders from the GOP Lincoln Club vs. genteel mixed-Party members of the "symphony set."

When you mention Irwin Jacobs' "reluctance" to go to the mat for his boy, Matt, and instead use surrogate "proxy media," you must be alluding to the Jacobs-funded KPBS alliance with inewsource which is today featuring a re-worked sob-story about the early years of ex-Marine and new Dem Oliver Twist. As I recall, these details were reported here in the Reader months ago, but this iteration has treacly interviews with the husky-voiced mayoral candidate himself and his mother.

It's better than "Downton Abbey."

"[A]bout the time Filner's problems were beginning" hardly covers the reality of City Attorney Jan Goldsmith's Machiavellian efforts to destroy Filner from Day One, as unashamedly outlined by Tony Perry in the Nov 3, 2013, article in the LA Times.