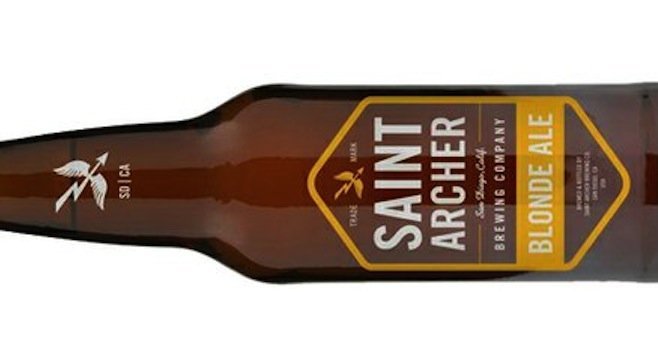 Even with a bevy of surfers, skaters, and snowboarders as investors; awesome brewing talent lured from Left Coast Brewery and Maui Brewing Company; and a distribution plan that will help them reach many people very quickly; the buzz about newcomer Saint Archer Brewery (9550 Distribution Avenue, Mira Mesa) is more of a hum. Local craft beer fans recognize the name, but seem less enthused than might be expected about their beers—a blonde ale, pale ale, and India pale ale.

In this day and age of sour ales, triple IPAs, and barrel-aged everything, it’s tough to get excited about a trio of offerings that, by standards in the ultra-craft hotbed of American brewing, is a bit pedestrian; the type of line-up one might have encountered at a brewpub back in the mid-nineties. I’ll come right out and admit that no change of underpants was necessary for me when I encountered my first bottle of Saint Archer beer, but I was jazzed to get a taste as I believe that, with the personalities behind the business and the potential reach they provide the business, this operation has the chance to convert many a crap beer drinker into craft beer drinkers.

My first sip of the rookie brewery's wares was Saint Archer Blonde Ale. Blonde is a vague term where beer is concerned, so allow me to elaborate. This beer is a kölsch, a light-bodied, golden-hued German ale built to be easy drinking. That increased drinkability comes primarily from low levels of hopping. Some may read this and assume a lack of Lupulin translates to a lack of flavor, but they’d merely prove the assume adage right (minus the me part).

Saint Archer Blonde Ale pours crystal clear and has a nice, mild, and brilliantly balanced flavor. It rivals Ballast Point Pale Ale which, despite its misnomer moniker is a kölsch, as the best version of this style in San Diego County. Saint Archer’s is livelier on the palate and edges out the beer formerly known as Yellowtail because of the brilliant, mildly bitter spike in its finish; a definitive kölsch characteristic that comes through perfectly with Saint Archer Blonde.

It’s not like me to feel the need to write about such a simple beer, but brewers Rey Astamendi, Kim Lutz, and Cy Henley got this one right. It’ll be nice to see what they do when they go beyond basic styles, but considering the company is built around mass production of beers like this, it’s nice to see how well this one turned out.