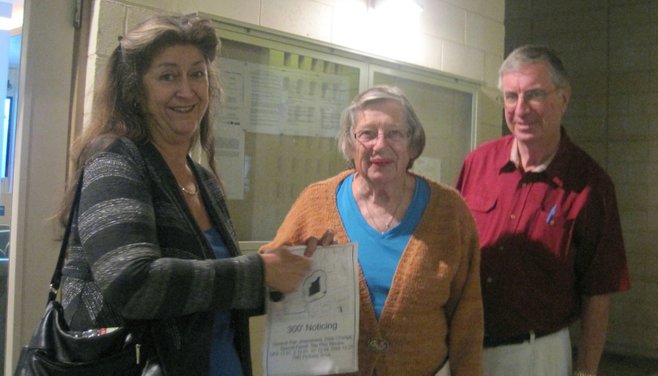 After a nearly two-and-a-half-hour hearing, the La Mesa City Council on May 28 voted 4-1 on actions to allow the construction of a 198-unit apartment complex on an 8.64-acre site located at 7834 Parkway Drive.

Councilwoman Ruth Sterling voted against the motion that upheld the May 5 planning commission approval of the Fairfield Residential project proposed for land north of Interstate 8.

The council vote also authorized actions that included a general plan amendment and zoning change for the site where a bowling alley was built in 1963. The facility, converted for use as Coleman College in 1981, has been vacant for six years. In 2006, the council rejected William Lyons Homes' plan to construct 178 townhomes, and the land "was subsequently sold to the Church of Scientology," according to city manager David Witt's report.

At the meeting, Fairfield Residential vice president Ed McCoy said his company "has been around since 1984." The privately held company owned by Brookfield Asset Management and CalSTRs (California State Teachers' Retirement System) "built almost 100,000 luxury apartment homes across the country," he said. Properties include the Pravada and Alterra complexes adjacent the Grossmont Transit Center in La Mesa. McCoy also pointed out that the Fairfield plan has 145 fewer bedrooms than the Lyons plan.

Sterling called Fairfield a "good neighbor" in terms of existing properties. She also acknowledged the testimony of project opponents. Sterling noted concerns about increased traffic and told McCoy that the project was "so large." Before voting, she said, "I can't go against the public."

The hearing attracted more than 100 people. Five spoke in favor of the project; 14 residents protested it. Mary England, La Mesa Chamber of Commerce president, mentioned the $500,000 in annual property tax the city would receive and the benefits of adding residents to the population. "They [renters] will live, dine, and eat in La Mesa," she said.

Opponents' objections included the prospect of increased traffic on the two-lane Parkway Drive and the effect of additional drivers on their streets. Residents said that drivers, including parents, already speed near Maryland Avenue Elementary School.

Kim Chubb, a Seton Hall Street resident, displayed a PowerPoint presentation with photographs of numerous parked vehicles. "This is what we already have," she said.  She was among the residents who asked the council to postpone a decision because the city only mailed hearing notices to the 64 property owners living within 300 feet of the site. While the city adhered to state law, other residents maintained they would be affected by development on the site bordered on the north by Maryland Avenue.

Julie Sutton-Hayes and her mother, Adeline Sutton, appealed the planning commission decision. Each lives in a house on Maryland, and both received notices about the hearing. Carol Kear, who lives across the street from Sutton-Hayes, said she was not notified.

After the hearing closed, councilman Ernie Ewin compared the development to a family expansion. "My wife and I had two children. We adopted [another] two [children]. There are ways that this can work," he said.

This development should definitely go forward and there should be lots more like it. San Diego needs lots of large apartment buildings. This is a city, not a village. The single family homes belong in the burbs. What's needed here are huge multi-family buildings; subsidized and otherwise. Rents are at ridiculous levels and people foolishly adhere to outdated ideas like "height limits." Hillcrest is a prime example: people there want to maintain the "neighborhood character," and yet whine because they can't find an affordable place to live. Single family homeowners want to keep the value of their property up, so they fight against any development that might give people more choices. People in La Mesa, as well as other parts of San Diego need to wake up and realize this is a large and growing city and restricting housing development benefits no one.