Tom yum and pizza on Park 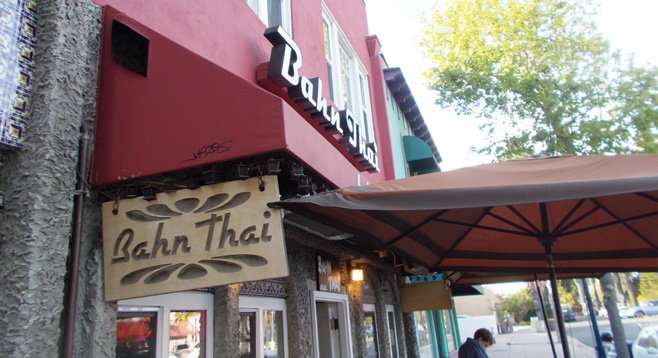 It’s one of those days. Can’t make up my mind. This side of the boulevard or that?

I’m up in University Heights where Park meets Adams Avenue. I love it here, with all the li’l old wooden bungalows converted into cozy eateries.

On the west side, there’s El Zarape, guaranteed value, except I’ve been heavily into Mexican food recently. There’s also Small Bar, but I don’t want to get sucked into beers — gotta work tonight. Or there’s Bahn Thai. Hey. Haven’t had Thai for the longest time.

T’other side? Hmm…Abyssinian place. Think injera, the yeasty, squelchy Ethiopian bread, or kitfo, which is marinated raw beef. Or I could give Soltan Banoo a whirl. Persian place. Another family affair.

Oh, heck. Maybe I should divide this meal into two courses. One here at Bahn Thai, the next across the boulevard.

Bahn Thai (“Thai House,” right?) is the gray place with brown square umbrellas outside and a maroon-painted second-floor frontage. It’s only five o’clockish, but all four sidewalk tables — and four more in the tiny inside — are filled. I step up to the counter and have a look at the menu. Prices are pretty dang good. Five chicken satay are $5.95. Five spring rolls are $4.95. And we’re not talking happy hour.

Larb gai, Laotian ground-chicken salad with nam pla (a fish sauce you either love or hate; I love it) is $7.95. Noodles like pad Thai and curries like panang start at $7.95 (with chicken, beef, pork, veggies, or tofu) and climb to $12.95 (when roast duck is the meat).

So, heck, really reasonable. Plus, they all come with white or brown rice.

Now I have a second brilliant idea: I’ll have me a little something and also buy a panang curry to go, for the lovely Carla.

Then I’ll head across the road for the second course.

I order a small tom yum soup. Love the stuff, ’specially when it sets the hairs on the back of your neck sparking. I ask for the one with shrimp. Then I order a panang for Carla.

“How hot the soup?” says the gal, Chittiphon. 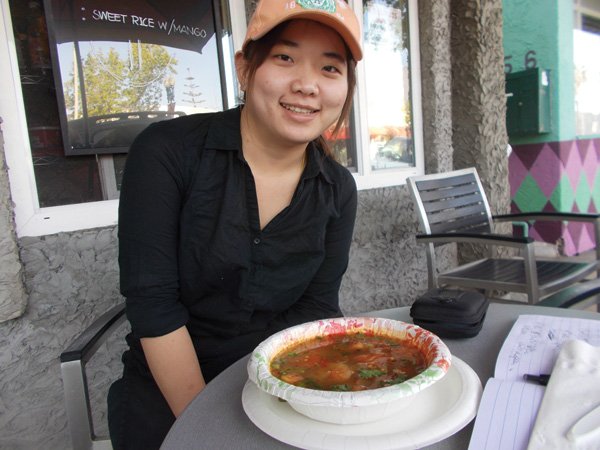 The tom yum soup looked like some evil, fuming lake in Yellowstone.

“Ching-ching,” I say. Learned that word for “honest” not long ago.

I go find a seat outside, across from a gal who’s also getting tom yum.

“The pepper heat is so good if you’ve got a cold or flu,” she says. “That’s why I’ve ordered it. I feel something coming on.”

When Chittiphon lays mine on the table, it looks like some evil, fuming lake in Yellowstone, all greens and reds. I see four big white shrimp, tomato chunks, green onions, lemon grass, cilantro, and button mushrooms. And...hot! The little red peppers float in clusters, daring you to slurp ’n’ chew.

It comes in a shaped, pressed-paper soup bowl. That’s a first.

But, boy, the lemony, peppery shrimp thing, along with the burn, it can’t be beat. And four fat shrimp are pretty filling. All for $4.95. 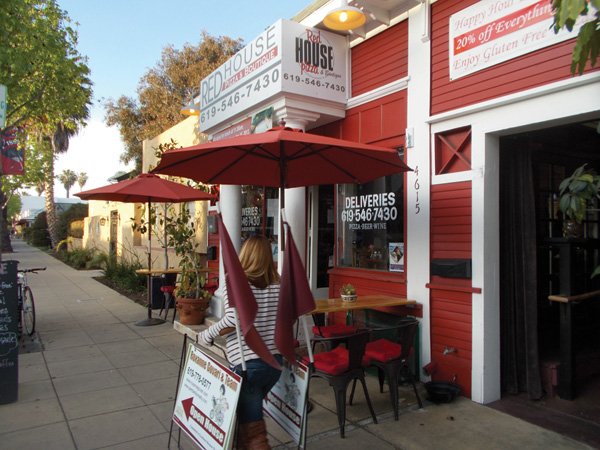 Okay, time for the second course. I cross Park. End up at the Red House, a pizza-and-wine joint, mainly because it has a happy hour. That means 20 percent off food and drinks (30 percent on Mondays and Tuesdays). 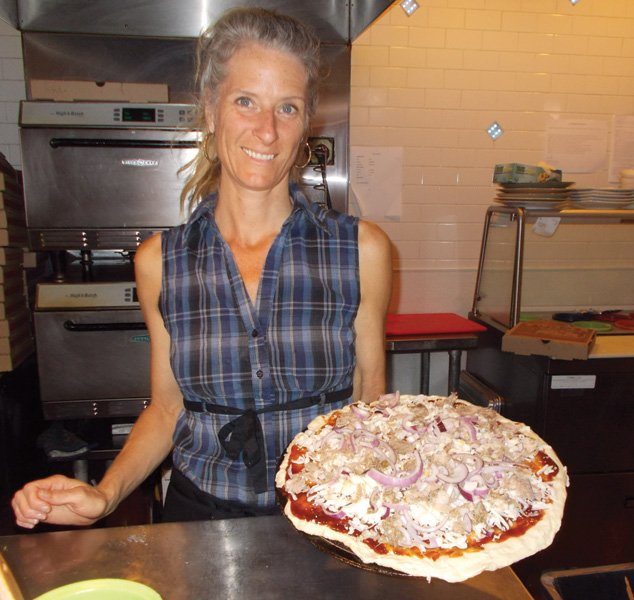 I take in the surroundings: woody, lots of wine in racks, white-tiled walls, open kitchen. I grab a seat at the counter, and the first thing I see is this pizza. It’s 14 inches, piled high with cheeses, chunks of meat, red onions. Looks like there’s even a slathering of barbecue sauce underneath.

“It’s the ‘New Zealand’,” says Sarah, who’s making it. “That’s where the owner’s from. Barbecue sauce, cilantro, onions, slow-cooked pork…They’re into pig down there. What would you like?”

Pizzas start at $7.50 for a ten-inch with red sauce and mozzarella. But mostly they’re around $10 for a small, $14 for large. Hmm…more than I have right now.

But the list of “scrumptious sandwiches” starts off with a roasted parmesan eggplant sandwich for $6.75. And they have “fabulous flatbreads.”

Oh, man. Two things: the gorgonzola definitely comes through, and what a crunchy crust. You can taste the yeast. Wicked. Nearer the middle, where the arugula salad is tossed all over it, a blue-cheese pungency rocks through.

So, $11.50 plus tax (if you leave out Carla’s panang). Not bad for two meals from two continents on two sides of the same street. Sometimes, indecision pays off.

PS: Carla said two thumbs up on her panang. She gave me a bite. Plenty of chicken, and with the coconut milk, sweeter than most curries. Delish.

Nearest Bus Stop: Park and Madison (11 is the best connection); Park and Washington (1, 15)