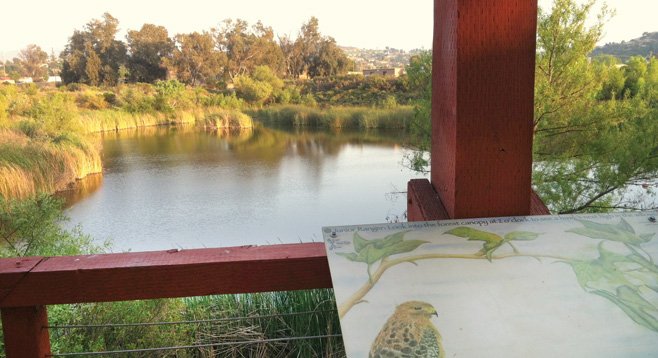 Lakeside’s River Park Conservancy was formed in 2001 to acquire lands along the San Diego River through purchase or donation and to restore the habitat and develop trails for the benefit of Lakeside residents. The conservancy is part of a coalition of 50 community-based conservancies and friends groups that are working to preserve and restore 52 miles of the San Diego River, from the headwaters in Julian to the Pacific Ocean, and includes 400 square miles of watershed.

Lakeside’s 100-acre preserve used to be a highly channelized river with a surrounding sand mine. It is now becoming a beautiful riparian willow forest and flood plain. In early 2008, the first phase of a 3-mile trail was opened to the public along the river from Channel Road to Riverford Road. Visible is the difference that native plants can make as one compares the restored preserve area with the section that is still being used for sand mining and is covered in predominately non-native mustard. The current mine will one day become additional park space, once the mining operations are complete. Hanson Heidelberg Cement Group will be donating 22 acres off Channel Road for parking and recreational/educational use. The property currently has a monument on it constructed by artist James Hubbell. The monument will become one of the entrances to the river park.

The section that is currently opened to the public is perfect for all hiking abilities. The terrain is generally flat and handicapped accessible. It is open seven days a week to hikers, runners, cyclists, and horses between dawn and dusk. Dogs are allowed (on leashes). Visitors will note several small memorial name plates along the trail — donors who helped to pay for the restoration and river trail. 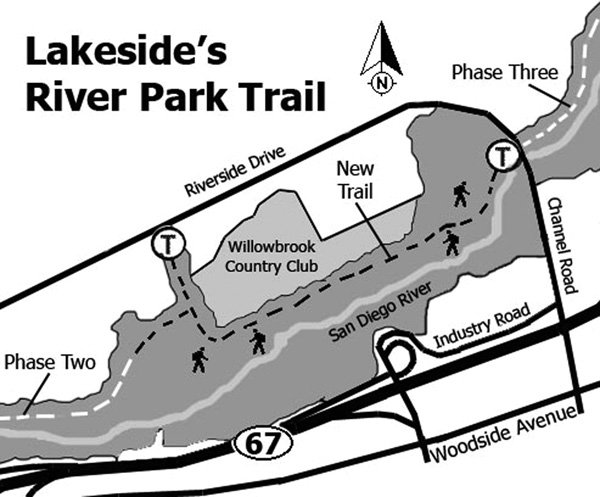 Starting at Riverside Drive is the Lakeside Land Reach, which heads south along the west side of Willowbrook Country Club. The trail then turns abruptly east along the section known as the Willowbrook Reach, which has the country club on the north side and the river on the south side for 3000 feet of trail. This section has a deck overlook where wildlife can be viewed in the pond below. The last 1700 feet of trail is known as the Hanson Reach, which is adjacent to Hanson Aggregates, which donated this section of lake to the conservancy. Plants to be seen along the entire length of this trail include willow, mule fat, sage, monkeyflower, California lilac, toyon, and laurel sumac. Nonnative eucalyptus is gradually being thinned as native oaks and sycamores are maturing.

This is a wonderful area for bird-watching. Several of California’s threatened and endangered bird species, such as the Least Bell’s Vireo and the Southwestern Willow Flycatcher, are dependent on riparian willow thickets such as can be found here. Keep your eyes open in spring and summer for these rare species! Expect to see Gadwall, American coots, herons, egrets, and hopefully-soon-to-be-nesting osprey that fish in the pond.

For more information about Lakeside’s River Park Conservancy and their restoration and conservation efforts, see their website: lakesideriverpark.org