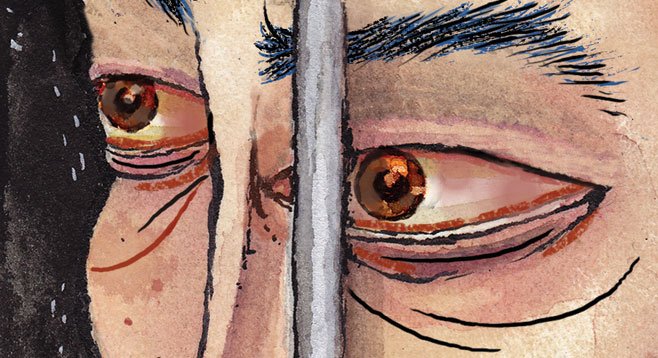 Will Work for Suckers

I just picked up the May 23 Reader, and I’m looking at the “artwork” on the cover, “She Gave Her Son an Ocean-View House, a New Lexus, and $130,000.” Whom do you have doing those pictures for the cover of the Reader? A seven- or eight-year-old? I hope you pay them off in lollipops and not in real money.

I kept waiting, kept reading. Just before the last paragraph I realized that, once again, the Reader had just published yet another run-down rehash of a crime. Nothing more than I already likely read in the paper or online when this story broke.

I don’t take anything away from Eva Knott. Being the professional she is, she spun this tale in such a way it initially read like it would reveal something about San Diego, a person or a place which would mean something to San Diegans. This is not to mean Sherry Chang didn’t mean something to her friends and family.

I kept thinking surely the next paragraph would reveal the purpose of this article and mention the missed opportunity of getting medical help for someone so obviously mentally ill. Nope.

In actuality, if this is what it takes to land a gig writing a feature article for the Reader, most any of us (perhaps not as well-written as Eva) can find content and give a detailed rundown of a crime, a down and out, or rehash with a seductive title.

Ok, it is a free publication. Why complain? I miss the meaty, meaningful, evoking and often eye-opening, leave-you-thinking-about-it work from the Reader’s feature articles. I know many of us don’t rush for our Thursday read like we used to.

This is a comment on your Roam-O-Rama column in the May 23 Reader. This thing you call Lopez Canyon at Los Peñasquitos Canyon Preserve — that’s a crappy map you have there. It’s very confusing.

Sorrento Valley Road is a different road, which runs up toward the direction of Del Mar, more or less parallel to Interstate 5.

The map you have is really crappy. The orienting of it...what you show as north is not north. The way you have this map drawn from bottom to top is actually in a northwesterly direction. It’s not north the way your arrow shows. Just get ahold of any San Diego County atlas and you’ll see what I’m talking about.

The Reader has three things going for it: Jeff Smith, W.S. Di Piero, and Ed Bedford. Who’s in the wings? Scott Marks.