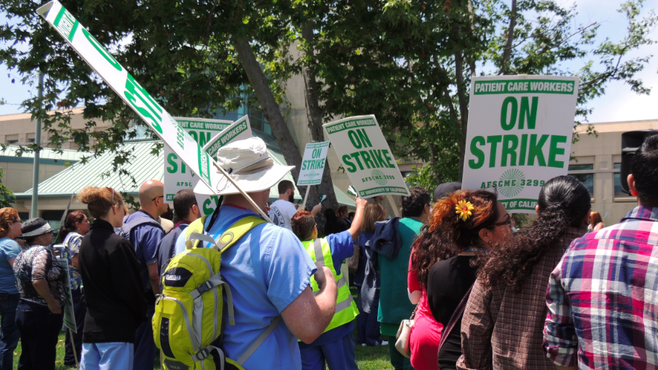 Thirty minutes into a healthcare workers rally at UC San Diego Thornton Hospital, La Jolla, on May 21, a healthcare technician in blue scrubs approached the microphone and said a deal had been reached between the university and the labor union.

As he spoke, he held up a briefcase with large stickers on it that read: “Golden Handshakes for UC.”

“What are they going to offer us here?” he asked the crowd of about 200 patient-care technical workers who were making noise in support of AFSCME Local 3299, a union that represents 20,000 University of California employees. The speaker then opened the briefcase and pulled out several cans and a bag of cat food. The crowd made more noise.

The rallies on May 21 and 22 took place statewide, from Sacramento to San Diego, during a patient-care technical worker strike at UC Medical Centers. After a year of stalled negotiations over skyrocketing compensations for execs, staffing levels, and other sticking points, the nursing aides, radiologists, respiratory therapists, surgical technicians, pathology lab technicians (and many others) have had enough.

The skit on the lawn in front of Thornton Hospital aimed to symbolize the “shift in values” that stem from a 2011 policy change, which resulted in soaring management salaries and management costs. Meanwhile, UC Medical Centers recently announced their intent to reduce 300 hospital workers, or 4 percent of its full-time workforce, according to the union. The union also reports that UC Medical System earns almost $7 billion in operating revenues and profits in the hundreds of millions.

“These numbers are staggering,” said Larry Scinta, a respiratory therapist on the bargaining team for a new contract. “We’re making money. But they’re cutting us everywhere we look.” He said some employees have been working as per diem employees for as many as five years, without holiday pay, sick pay, or pension plans, while they wait to be hired on as a permanent employee. Scinta was one of many who complained about being overworked to compensate for the imbalance in hiring practices.

“I’m forced to work 10- to 12-hour shifts every day and sometimes don’t get a lunch break,” he said. “They tell some people they can’t work overtime and others they run into the ground.”

Kelly Lloyd said she is one of seven cardiovascular technician assistants who work daytime hours on weekdays and for 15 days a month is expected to cover emergency calls on nights and weekends. Her coworker said he had worked 212 hours last month, and Lloyd said that has been the average number of hours for the employees in her department for at least the past year and a half. “Everyone’s burned out,” Lloyd said. “We’re short-staffed. It’s just a matter of time before something happens. We want to be able to properly care for our patients. We need our rest, too.”

Victoria Ledford works in the sterilization department and prepares the operating rooms for procedures. She wore an “I’m willing to strike” button on her shirt during the rally and flapped noisemakers alongside others in the crowd.

Ledford said her willingness to strike comes after 11 years as an employee and finding out UC’s plans to make retirement cuts and increase parking-permit fees. She said the parking fee for employees has increased from $50 to $82 a month since she began working at the hospital.

A statement issued by the UC San Diego Health System, "UC officials are disappointed that AFSCME is threatening services to patients as a tactic in negotiations that are mainly about pension benefits. UC has proposed a total compensation package that includes competitive wages, excellent medical and retirement benefits, and good working conditions....

"In fact, the average annual earnings of UC San Diego Health System patient care technical employee in the AFSME union is $52,617.60 in wages with an additional benefits package valued at $19,468.51. And while AFSME claims understaffing as a concern, more than 140 positions have been added to their union in the last two years."