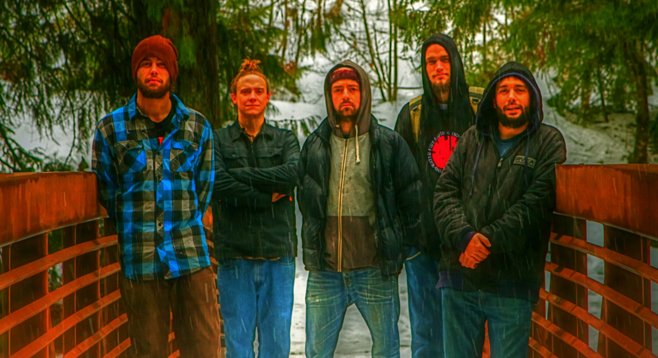 I came away from my first Brothers Gow experience with no clear idea what manner of band I was listening to. There is no defining sound here. The music seems to be the end result of the workings of a very (overly?) democratic process: lots of ideas grafted together. This is how Brothers Gow builds their songs and their sets, apparently, by grafting one phrase onto another, and then another, and so on.

Sometimes the grafts are abrupt, across-the-board tempo and thematic and even genre changes. Generally, it works, in a jam-band kind of way, though the Brothers are more unpredictable than your average noodlers. The concert ride is bumpy, and each bump is a passage cut from the pages of rock history. The ’70s are all over Brothers Gow music, and that’s okay by me. I grew up then, and these old sounds are like best friends. Did I mention the light shows?

Lighting is so important to the Brothers’ stage production that the band lists Matt Collier (their lighting guy) as a sixth member of the band. But the Brothers Gow are not, in fact, brothers; they are Alex Gow Bastine, Carson Church, Kyle Merrill, Ethan Wade, and Nate Walsh. They are from Flagstaff, but it comes as no surprise to learn that the band has relocated to Ocean Beach. Even if they are 40 years late for the peace-and-love movement, don’t count out a resurgence of same, even if the underlying motivation is neither peace nor love.

Road mileage has smoothed the Brothers’ sound over the past five years, but time on many stages has also quickened their reflexes. That said, don’t let your mind wander at a Brothers Gow show. Stay alert, for this is not your typical psychedelic jam band. Except for the lights.

Thanks for the love! This is going to be an awesome night. We have some special things worked out for this show! For more info check out www.brothersgow.com.