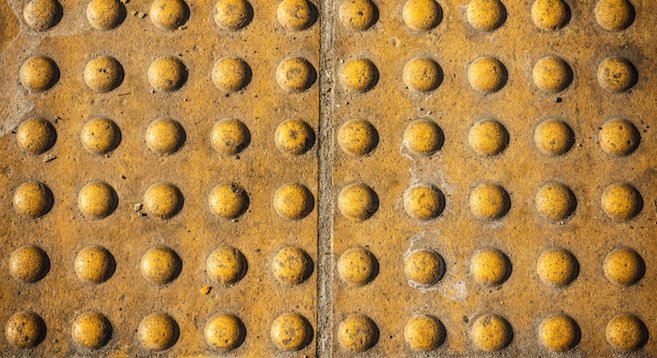 Please help my poor husband solve his ongoing perplexity. When there are perfectly good and relatively new wheelchair ramps on each corner of an intersection, why do we see crews tearing them out to be replaced with those ugly, yellow, rubbery, bumpy ramps? He’s seriously been losing sleep over this!

You’d think there would be an easy answer for this one. They’re just sidewalks, after all, right? Wrong. Wrong, wrong, wrong. San Diego’s relationship with sidewalks makes Bill Henrickson’s love life look straightforward. The city itself is only partly responsible for sidewalk maintenance and repair, the bulk of which actually falls to private property owners under the provisions of California State Highway Code 5610. Look it up if you don’t believe me. It’s just a Google away. Generally speaking, “curb ramps” (the technical term for wheelchair access ramps at major sidewalk junctures) are built and maintained by the city because they tend to be located on public property. Now, when the city goes to repair or replace anything, they are 100 percent beholden to the standards outlined by the Americans with Disabilities Act. Naturally, the ADA has a thing or two to say about curb ramps, including that “a curb ramp shall have a detectable warning and the detectable warning shall extend the full width and depth of the curb ramp.” Detectable warnings usually come in the form of “truncated domes,” which is the catchy name for those “ugly, yellow bumps” of which you don’t think so highly. The theory behind the truncated domes is that they provide an area of high color contrast and tactile difference, which make it easier for seeing-impaired people to navigate street crossings. Maybe knowing that the truncated domes help the nearly blind avoid being run over will soften your opinion some?

As for why ramps that seem perfectly good are updated, that all comes down to city policies regarding ADA compliance updates! Certain things trigger the city to overhaul curb ramps. The most common triggers are major construction or renovation of public buildings and citizen complaints, which are usually processed through the city’s Department of Disability Services. There is actually a standing list of public-works projects to improve citizen access that Disability Services approaches when funding is available. If you want to comb through the city’s documentation on past, current, and upcoming projects, there’s actually a somewhat-user-friendly set of databases at sandiego.gov/cip/projectinfo, which might be a good place for you to start looking for the upcoming works in your neighborhood.

Regarding those truncated domes outside grocery stores, etc. They are negatively affecting thousands of people,including older folks trying to push their grocery carts over them. Not to mention, they break eggs! When was the last time you or anyone saw a blind person grocery shopping alone???? I am all about safety precautions for the disabled but this has to be a hardship on people with disabilities also! This has to be one on the most miserable mistakes that the state of CA has ever passed. The general public hates those truncated domes! Why can't CA come up with something better? Like, a designated person at the entrance of these grocery stores to help disabled shoppers! That would make more sense and would be more cost affective! How can we, as the general public move to get rid of those horrible truncated domes????

Eggs would definitely break if you drop them on the domes! But eggs are breaking inside the grocery bags in the carts? Do you have photos?

glitzy1 The ADA is a FEDERAL law, one that was signed into law more than 20 yrs ago. If an entity, such as the state of California, fails to comply with the ADA, it can and does risk not only lawsuits, but also financial penalties and potential loss of federal funds. We, as the general public, simply can't "get rid of" anything, including those "horrible truncated domes". They could only be removed after winning a legal fight against the federal gov't, do you want to pay for it, or if an approved substitute is found. The ADA has very specific and exacting specifications that must be met and the must be ADA approved.

Ugly? For the blind or sight impaired, truncated domes are beautiful. https://truncateddomesdepot.com/ 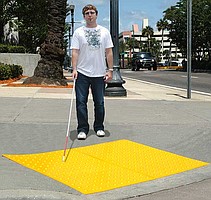 It's like saying the yellow crosswalk lines are ugly. They make drivers pay more attention to pedestrians!