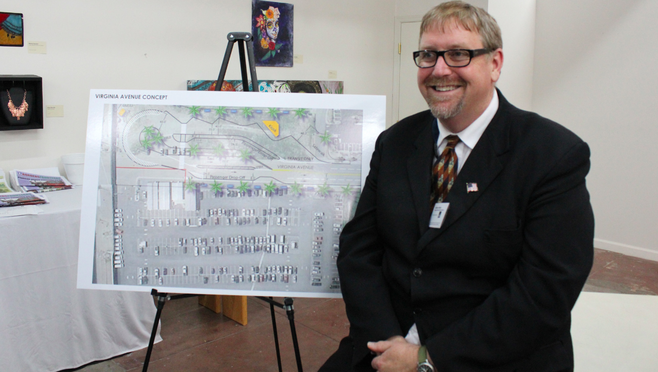 The U.S. General Services Administration (GSA) held a meeting at Casa Familiar’s arts and cultural center in San Ysidro on Thursday, May 9, to display plans for a massive reconstruction of the San Ysidro Port of Entry.

The fully funded first phase of the construction includes the creation of 46 vehicle-processing booths in the northbound lanes instead of the current 24. The administration is also accelerating a small portion of Phase 3 construction: a project along Virginia Avenue, projected to be completed in summer 2015, will add a small pedestrian-processing building as well as a transit center.

Ten northbound pedestrian booths will be added with two additional bidirectional lanes. A pick-up and drop-off area will be broader and allow for buses, privately owned vehicles, and taxis.

“The border is much more porous today, where people live in one community and work in the other,” said GSA employee Anthony Kleppe. “What we know is that you need to have a healthy facility of transit. We have to have as much pick-up and drop-off as we can allow, and we also have to understand that there’s an impact for those functions. What we don’t want to do is what we did to this community in the 1950s and ’60s when we built I-5 and essentially separated people into two communities.”

David Flores of Casa Familiar attended the meeting and continues to provide recommendations and input on the GSA project. Since 2004 he has spearheaded the Border Dialogues, and in 2012 he undertook a Health Borders project.

Flores said most pedestrians report a negative experience at the border. In particular, air measurements show pedestrians breathe in significantly elevated levels of black carbon (soot) and ultra-fine particles. Flores said idling vehicles at the border have shown to produce greenhouse gases equivalent to approximately 166,037 barrels of oil per year and produce an estimated 78,700 tons of carbon dioxide per year.

In 2005, SANDAG reported that traffic congestion at the border has resulted in a loss of six billion dollars in business productivity.